In 2018, I wrote a book that foreshadowed COVID, in terms of the changes we’d need to make to build a more sustainable world and to respond to the challenges of the 4th Industrial Age. Never before have Brain Based Enterprises made more sense. But we cannot have such enterprises without changing the scorecards upon which Businesses and Governments measure themselves. Recently I encountered an enterprise that has the answer on Re-Booting the scorecards which drive our behaviour and reframing the notions of success for a sustainable world.

A country’s domestic product (GDP) measures “everything except what makes life worthwhile.

WWI fills the gap of the lack of a welfare indicator in the current systems of GDP generally used by all countries of the world.  According to the GDP graph for the period 2000-2021, the American economy has had constant growth. This economic growth in reality only shows the growth of monetary wealth. When measured against  the WWI, it becomes clear that the current approach hides the real trajectory of overall welfare. 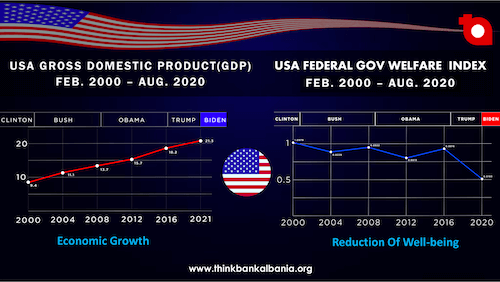 The Fourth Industrial Revolution, environmental change, and technology innovation are already driving changes needed to the way we measure progress in the world. In the graph, it becomes clear that whilst monetary wealth shows an increase, the welfare chart shows a decrease.  This is a major cause for concern by global observers and decision-makers. Think Bank Albania has devised a patented algorithm to track the WWI and this is ready for adoption by institutions, businesses, and organisations with an interest to Re-Boot the World.

The proposal is that the WWI serve as a guiding compass and roadmap for governments and organisations. It can be used as Archimedes’ lever in order to improve governance performance and to provide an efficient instrument in the strategy of increasing the welfare of nations separately and globally.

Growing GDP as an economic policy is a false governing strategy.  It is the root cause of bad governing and all problems of the humanity.  Shifting from GDP to a welfare index  is the only holistic solution to fundamentally improve global governing, life of humanity and save the world.”