Reflections. Raindrops on leaves and flowers; roses and lavender; color enhanced by glistening sunlight blessing surfaces during and after the rain passes away.

Rain is often seen as a negative weather phenomenon, especially during the summer months when everyone awaits cloudless blue skies and warm sunshine. From Nature’s viewpoint, rain nourished flowers, fruit trees, redwoods, oak and, ferns, feeding everything living on the planet; flora, fauna, and more.

A heavy downfall: ‘raining cats and dogs’; and an enhanced translation in French; ‘Il pleut des cordes’; ‘it’s raining ropes’.  ‎Torrential rain can indeed look like cords. Wonderful to observe………from under an umbrella/parapluie. 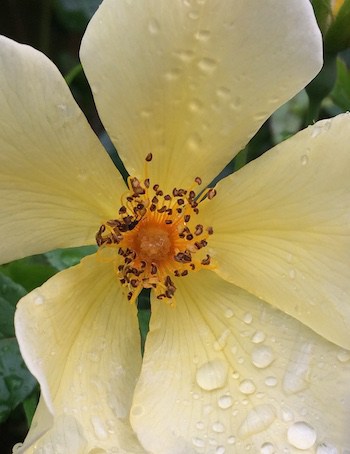 Listening to rain dripping onto leaves and river surfaces offers a unique form of serenity. A deluge, noisy but not cacophonic; an all-surrounding symphony, varying in tone depending upon different surfaces. Rain splashing upon a river surface; making small plumes;  a different but similar perspective as from underwater where the sight would not be un-similar; an opposite of splashing downwards; a reflection. Such imagery a trout would doubtless witness.

Raindrops enhancing an already heavenly scent, as it energizes the natural aura accompanied by an almost overpowering feeling of pure ecstasy. As each droplet graces leaves, flowers, and rivers, imagination flows and one is greeted by a spectrum of absolute delight.

Now to expand and explore.

‎Senses enhanced when surrounded by Natural Beauty. Closing eyes to expand imagination, guided by the heart and accompanied by Mother Nature’s angel. Archangel Ariel. Closed eyes do not close off any of the senses. The opposite.   Imagination and reality, enhanced sensitivity facilitates being at one with Nature. Although closed, inspiration, fantasy and indeed enhanced visuality take over, releasing a dimension hidden when eyes are open.

Following the initial ‘closing’ of a key sense, an expanded, gradually enhanced realisation envelops the senses.  Sit and relax, allow sixth sense, positive vibes to take over the consciousness. And if from nowhere, a surreal visualization encompasses heart and soul. Views of the natural environment become as vivid as the sound of falling rain. The whole area, previously limited by physical sight, expands. You are sitting, but walking outside the confines and limitations of normal sight.

Light shines enlivening the psyche as though eyes wide open, but much more.

Describing such a phenomenon is challenging; perhaps the equivalent of a flying dream. No barriers; an unlimited horizon, enhanced peripheral vision. Witnessing the ground in all its glory;  feeling, seeing,  all around. Visual enhancement; assimilation of Nature’s generosity.

Not everyone will be blessed with experiencing such a divine parallel Universe outside the normal context.

And now eyes open; as if a swift movement, Archangel Ariel departs, to doubtless to visit another Nature lover.

Initially, strolling around a riverside and woodland there will be vivid memories of when the eyes were closed; vivid imagery, fantasy or reality? Walking around the beautiful countryside, mind open to receive and discover something, anything previously unnoticed, overlooked.

Rain covering all in sundry, the sun breaking through clouds, glowing with magnificence.

Looking up at the canopies of trees, their height seemingly limitless, we absorb and become embraced by Mother Nature. They reach for the sky or is the sky reaching down to their capitulate to crown such regal giants.

Slowly, from a large tree trunk, eyes drift down to ground level where another world awaits and presents itself. A world where the tiniest forms are perceived as giants. Another parallel universe? Free the imagination.

Tree bark becomes a mountain range, valleys, canyons. Moss becomes a deep green forest, each and every stem of moss the look of a pine fern. Really look closely. Look between the moss and focus. It really does form a forest. When taking a photo, enlarging the image confirms what was witnessed.

The more focused on this micro-world the more wonders are liberated to embrace the heart. A feeling of being drawn to this other world. An invisible, gentle force, gathering energy.

Looking upwards, staring at canopies of trees from ground level, the sky penetrates gaps between leaves and branches. I must attract some strange looks, iPhone in hand as though awaiting a spacecraft to land!

Drifting from one dimension to another; a gentle morphing of senses. Fascination with the solar system to canopies of trees through to a micro-universe of Nature; totally absorbed in wonder‎.

Nature is always present whatever path we take. Those who possess a subliminal, instinctive, almost born-with natural sensitivity; admiration, love of wonders, big or small, high or low, require little prompting to create a joyous synergy with Nature; a gentle smile confirming realization.

Those blessed with being at one with Nature, fly with the golden wings of angels, following Archangel Ariel, to be awarded joyous views; almost a divine gift embraced by the Universe.

Those who recognize and resonate with such sensations will find themselves in a spiritual form of life itself. For what is life without Mother Nature and accompanying angels that transport us above the reality of ‎everyday existence.

Pegasus and Eagle Fly in Harmony