It’d been at least 4 years since I’d been behind the kit.  I’d fattened up physically a bit, from living a comfy life, eating and drinking well, not exercising, and just generally living that existence of wake up, go to work, come home, eat, tv, bed, repeat.  And then we’d occasionally let loose on the weekends.

ENJOY THE PRIOR CHAPTERS IN THIS SERIES ⤵︎

I’m not complaining because life was good, filled with travel which became a big interest in the 90s. But what has always added a nice spot of color in my life, in addition to travel and cooking, is playing the drums, with or without other musicians.  It’s definitely more fun to play with other musicians, but I have been known to get lost for a few hours banging away on the tubs by myself.

The timeline here might be a little squishy but I’m pretty sure the conversation we had when Thurb invited me to join the band was in Oct/Nov 1999.  I remember setting up my drums in my Mom’s home office where she had moved her business in the final years of its operation, and going to work learning all of the Pumpjack tunes.  The drumming in their music is well within my wheelhouse, so I learned the material cold.

With the holidays and all, I’m pretty sure it was after the New Year that I started going to Texas to play shows. I’m guessing this was January or February of 2K, and Thurb calls and says “hey, the brothers hooked us up with three dates supporting Sevendust – Lubbock, Odessa and Dallas, can you do it?” I said, “F-yeah I can do it.”  These were going to be my first shows with the band.  (I had gone to Texas to “audition” weeks earlier, but that was more to just play the set together, and smooth out any kinks. They told me the gig was mine so after I got back to Phoenix, I just kept practicing away.)

The three dates with 7D were going to be a Friday in Odessa, a Saturday in Lubbock, and then Sunday in Dallas.  My plan was to fly into Odessa Friday night after work, get picked up, go play the show, then play Sat, and then on Sunday and fly home on the latest flight from Dallas back to Phoenix to get back to work on Monday.

The weekend comes and I head off to Texas, get picked up, and suddenly find myself at this random warehouse somewhere in Odessa.  I remember being at the venue, backstage, and the Pumpjack crew guys trying to wind me up, messing with me, asking me if I was nervous – “first show, dude.., “lots of people out there, man” (prob 1K in attendance for 7D), “don’t F it up, cuz…we probably shouldn’t tell you, but, the Abbott brothers are here to watch you.”  Absolute A-holes, and I love every single one of them.

Was I nervous?  Does a bear shi…  of course I was nervous, but I wasn’t going to let on.

The truth was that while I was indeed nervous, I was also ready.  I knew the songs, and I could play ’em with conviction.  In a rare display of bravado, I said, “Nervous?  I’m going to give ’em a show.  Just watch!”

The cool thing was that Pumpjack hadn’t played in their hometown in a few months, so they had a nice faction in the crowd supporting them as well.  Pumpjack usually did well when supporting others, and would often win over the crowds.  And that’s how it was on this 3 date run supporting Sevendust.  We killed it at each place.

At that Odessa show, I distinctly remember climbing a short set of stairs to get to the stage and then getting to the drums.  I couldn’t see out, as the lights were too bright, but I heard the crowd. 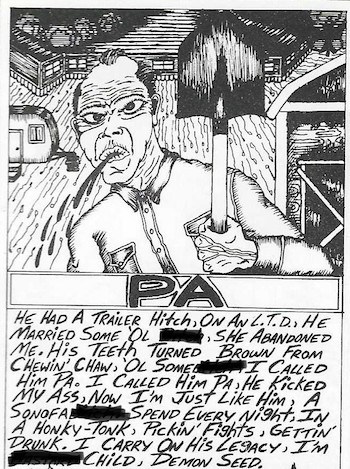 We launched into “Pa” and that was it, I would catch views of crowd surfing, moshing, fists, and horns in the air.  It was as awesome a first show as we could have hoped for.  It was good times, good feelings, the booze was flowing and everyone had a smile on their face after the show.

I have to confess I wasn’t really that big a 7D fan back then.  I became a HUGE 7D fan around 2010 when they released Cold Day Memory, but this story takes place literally 10 years before that, and those early 7D records were cool, but I wasn’t drawn in totally at that time.  However, I knew who both Lajon and Morgan were based on having seen their videos and photos in magazines and such.

During our set, I looked over and saw Lajon watching me.  I made the super rookie mistake of not having taken anything with me on stage to drink.  I was fine when I started, but as anyone can tell you, once the adrenaline kicks in, your mouth goes dry.  I was dying, completely parched, searching in that direction where Lajon was for a PJ crew person so I could get their attention to bring me a beer.  In between songs, I quickly made a motion in that general direction with my hand like I had an empty beer hoping anyone would respond.  Next thing I know, he turns around and walks away, as I’m guessing he thought I was looking to him to maybe help me out.  But I’ll never forget him bobbing his head as I caught him watching us.

I was told the Abbott brothers were there that evening, in Odessa, but I never saw/met them that night.

But also afterward, Lance tells me, “yeah, maybe don’t get too used to those kind of crowds and crowd reactions… that’s not how it usually is.  Sometimes, but not always,” says he. It seemed like that first show, the band could do no wrong and the crowd response to PJ was almost as loud as it was for 7D.  I heard what Lance said, but my brain wasn’t processing that all future shows wouldn’t be as cool as this one was, and then it was especially difficult to think all shows wouldn’t be just as amazing, based on what happened the very next night, in Lubbock.

Onward we rolled to Lubbock…

Next chapter: meeting the brothers Abbott