Policies Have their Personality

I find a matching similarity between what Freud wrote about our personalities and how they shape up.

We have the id, which is the unconscious part of our psyche which responds to our basic needs and desires. On the opposite extreme, we have the superego whose function is to control the id’s urges seeking fulfillment of our desires and needs. The superego holds the internalized moral standards and ideals that we acquire from our parents; society to figure out what is right, and what is wrong.

The ego is the one who seeks balance between the id seeking pleasure and the superego with its strict conscience.  The ego is the bridge that connects the extremes and if it weakens or collapses, the personality collapses as well.

This balancing act reminded me of the Iron Triangle. The two concepts may appear as far from each other, but I find them closely related.

The iron triangle referred initially to the three forces in making decisions in a democracy. The three forces are the In United States politics; the “iron triangle” comprises the policy-making relationship among the congressional committees, the bureaucracy, and interest groups, as described in 1981 by Gordon Adams. Wikipedia describes the triangle as the figure show with my addition of the revolving door effect. 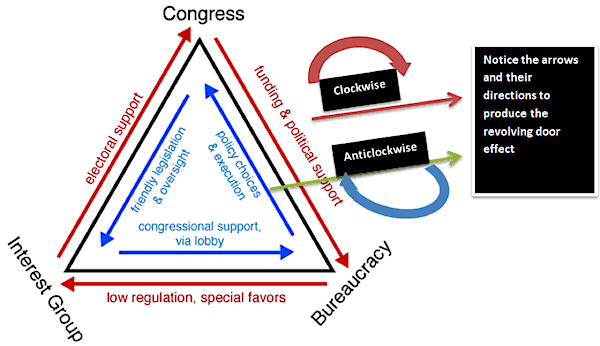 What does this triangle have to do with the triad of personality?

They are strongly related. The Interest Group is the ego part of our personalities that seeks to satisfy its desire for profits.

Bureaucracy is the superego that issues rules and laws to protect the interest of the population and serve the needs of the poor class. The bridge or moderator is the Congress, which should balance the widely different demands and desires between the interest groups and the bureaucracy. The interest group with self-serving interest binding its members together may exercise different methods such as supporting candidates to be re-elected for the congress. They may also use several methods to soften the laws and ease them to serve their interest. Congress gets its funds from the bureaucracy and so to please them they may tend to pass rules and laws that serve the interest group, but not the poor class.

This imbalance becomes extreme if the weakening of the moderator (the congress) reaches a critical limit.

We see this happen in many sectors such as the health and education sectors. The triangle consists of cost, quality, and Access. This sector has frequent examples of the revolving door effect in which the patient who has just been recharged is readmitted for lack of quality treatment and the patient being discharged before completely recovering sometimes to cut cost.

This happens again when the lawmakers insist to provide maximum access to hospitals and the interest groups seeking the fullest satisfaction of their desires to make profits. The quality acting as a bridging moderator loses its strength. The patients have to endure falling medical quality services.pol

Life is full of complexities ending up in giving poorer services than desired. Humans are the main cause of these complex paradoxes when they allow the “personality” triangles to fall apart. This is mainly because of the distortion of their triangles that also distorts their personalities.’

The fractal grids of Rod King, Ph.D. consist of multiple complex paradoxes. I wonder how these fractal grids shall help in solving the paradoxes I mentioned in this post.

The personality of our policies is the same as that of humans. Policies have their personality as well.