Being ‘thrown’ on a horse, flying down a hill so steep; an imaginary cliff-edge; inspired thoughts of Pegasus, but ultimately without the wings. Recollections of abject terror frequently visit the memory. No training, dust from hooves in canter (or was it a gallop?). Sharp bends, no breaks to apply… an unforgettable experience; hence vivid memory re-enacted and put into words. There is no recollection of ‘landing’; my mind transported by stunned relief, with any equine element removed to be preserved for future visitations.

HORSE RIDING; GALLOPING OR FLYING
Learning to ride a horse; instructions delivered by a trainer with firmness and authority; fortunately, without the threat of a riding whip! Horses are extremely sensitive to human emotions; friendliness, fear, uncertainty, and apprehension are all received by a horse. 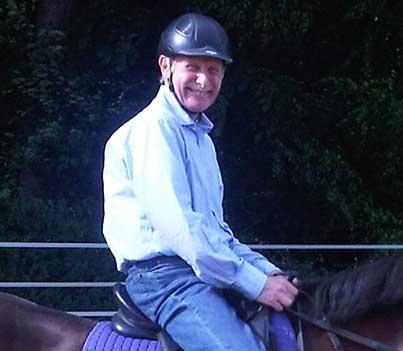 There is indeed a degree of empathy which when experienced is rather special; a privilege no less.

The phrase ‘horse whisperer’ is rather appropriate. A horse reacts to human voices and vibes. Just walking past horses in stables each one reacts in its own way as a person walks past. A number of horse lovers including Sophie, my daughter (who has her own cuddly, lovable horse, Mira) also had lessons at the time.

One training session involving riding without a saddle or stirrups. Riding without a saddle can be rather ‘interesting’ as one is literally on horseback but no manner of elevating away from the saddle to minimize discomfort; especially for males! The objective is to fully realize the ability to manage and indeed synchronize with a horse’s movements. A canter is a smooth movement and less painful.

I do remember one incident when left hanging, almost off the horse and literally clinging on for dear life until I gradually regained an upright posture. It may have been when galloping along a beach, my head hitting a tree branch. This was scary! But I survived.

I remember Johan Kruijf the former famous Dutch football player sitting in the bar having a bite to eat with his family. Friendly chap.

Lessons were confined to an indoor or outdoor arena. When in the outdoor arena, the sight and smell of the countryside stimulated a longing for freedom and open space but not initially possible nor recommended during the rookie stage.

Ultimately, Sophie and I used to enjoy horse riding at a stable in the south of the Netherlands. Freedom, at last, to be released onto landscape adorned with woodland, tree-lined avenues (ideal for a mad gallop!), white asparagus fields, and other tasty Dutch specialties stretching out into the distance; pristine, neat furrows.

When first riding along wide paths adorned with trees and bushes, a trainer used to accompany the newly released novices. I remember the incredibly tall horses. Goodness knows how many hands. A couple of hands would have been ideal to lift one up into the saddle. No such luck! Mounting such a splendid example of equestrian elegance was to a degree challenging. The stirrups too high to put one foot in, then haul oneself over the top. No box (as in England) to make mounting easier and indeed less painful. Ultimately though; ready for take-off! There were around ten of us out for the first ride. Initially a gentle stroll, easy and relaxed, absorbing countryside views, wind rustling through trees, and welcoming birdsong heralding the arrival of a bunch of rookies!

Then, the signal from the trainer who was of course leading, beckoned a rising trot. Up and down in the saddle, synchronized with the movement of the horse in a pleasing and elegant manner. This was the ‘warm-up’ procedure. The trainer’s hand (reminded me of the ‘Wagon Train’ Western, TV series) signaled a canter. Having experienced a canter at a slower pace at the stables this was beyond the imagination.

Almost viewing an infinity of freedom offered by this long, seemingly endless tree-lined avenue and fields of green. Cantering in unison, thoroughly enjoying gripping the horse’s flanks with one’s legs and remaining in a seated position.

This was a reality, a dream come true; almost what one imagined was a gallop.

READY FOR LIFTOFF
The next stage was indeed a gallop. A group of rookies suddenly being instructed (by another wave of the instructor’s seemingly imperious hand) the troop galloped. Really galloped! Dust flying, leaning forward, raised above the saddle. Infinity; the Universe knows no bounds; elevated to a new and exciting level of consciousness; rider and horse join as one, seeming flying through the air, just above the pathway to enlightenment.

A full gallop; previously confined to the imagination; now a reality!? The combined noise of horse’s hooves around me as the ‘troop’ galloped in a relatively close formation, bordered on the surreal. Galloping in a group is scary; proximity to other rider’s front, back, and both sides leaving only an imaginary vertical take-off should anything demand such dramatic action, fantasy, and hope!

A particular memory beckons description. My horse literally galloped away at full speed; passing all riders including the trainer?. During this high-speed gallop there was a sense of breaking out of orbit and heading for the infinity of Nature via an avenue of trees; a ‘runway’ as if heading for a shining star and hopefully not a black hole.

My head close to the horse’s neck, flying with the majesty of a four-legged angel, I looked down and witnessed the blur of hooves pounding at breakneck speed, the wind in my face. Then sudden terror at what would happen if we ‘crashed’. No parachute, no James Bond DB5 ejection seat. At this moment I was vaguely conscious of the trainer, way behind with the rest of the troop and horses being pack animals following the fastest. Should the horse have had wings we would have taken off and headed for the tops of trees and perhaps closer to ‘Cloud Nine’, or even higher; the Universe beckoned! Pegasus to base!

The trainer was yelling at me with a mix of Dutch and English expletives which seemed to make this horse go even faster. Carefully and progressively tugging the reins (no disc brakes) slowed this racehorse to at least below the speed of sound. I am unsure whether I enjoyed leading the pack (or rather the horse leading the pack) or on reflection sheer terror removed any concept of reality. The memory serves me well; every meter, kilometer and ultimately returning from a vacuum of the space-time continuum, seemingly a re-entry into Earth’s atmosphere; breaking away from a neutron star’s event horizon. Challenging at the best of times.

I was elevated, heart, body, and soul; looking staring at the in front, off the saddle, the horse’s mane flying around in the wind. Then the sudden realization that witnessing the flying hooves of this wingless Pegasus hit me for six. There was little connection with reality. What on earth was I doing? This moment has lived with me ever since and visits me often. My Divine Breadcrumb is the realization that my life was walking (or rather galloping) on a tightrope. A stunned sense prompted me to consider whether I would live to tell the tail. Since this very real experience, I have never taken the fragility of life for granted. Flying high on horseback as if heading for the Universe. A memory as vivid now as it was then.