It is with great sadness that I write this article about my friend Bernie Tormé, songwriter, guitarist and collaborator with Ozzy Osbourne and Ian Gillan, who sadly passed on St Patrick’s Day.  I lost a friend, mentor and music legend.  My family’s hearts go out to Bernie’s wife and family for the good times we have shared together.  This article does not dwell on the sadness of Bernie’s passing, instead the greatness of his life.

I regret coming to Bernie’s music late, having met at his studio in a chance encounter some 7-8 years ago, whilst recording some music for a friend’s wedding.  Bernie and I spent all day chatting whilst my friend laid down the tracks, as I only had to play bass.  Some while later, I asked Bernie if he would be willing to guest at a Music and Business event I was organising with the Chartered Institute of Purchasing and Supply.  He was initially reluctant to be involved, thinking that it might involve meeting a load of “suits”, having experienced some of the worst excesses of music industry “management” in his time as a slave to Rock’n’Roll.  However, he agreed in good faith, being a trusting and humble soul.  I “baptised” the occasion by asking Bernie to set light to a guitar in the venue car park.  Once Bernie relaxed into the event, I recall that it was rather hard to extract him from the chatter … and the bar.  See Bloomberg TV for the flaming grilled guitar inferno.  It was a magical night and our friendship was forged.  Mr Tormé even forgave me when The Belfast Telegraph misread the press release I sent to them and mixed up Bernie Tormé with Bernie Taupin, Elton John’s writing partner.  As far as I know, Bernie had never collaborated with the originator of crocodile rock and high heel sneakers. 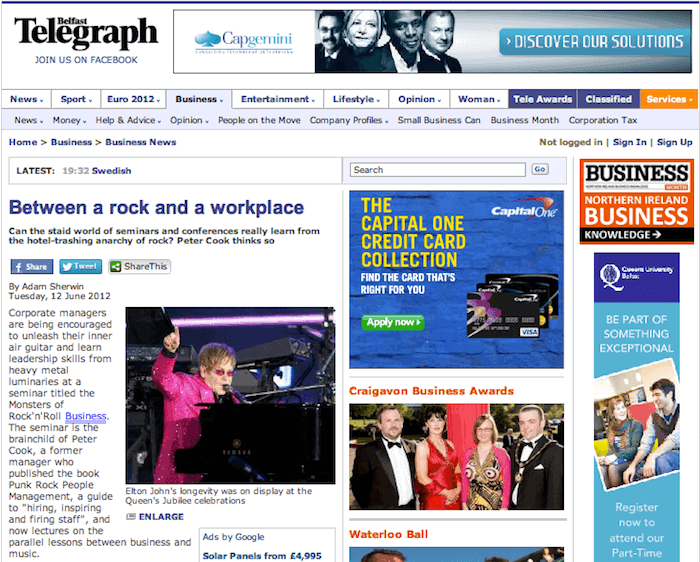 Having gained Bernie’s confidence that not all business people are dull, he invited me round to his house the week after.  I wondered why and he just said he had something to talk about.  We spent the evening discussing his renaissance in a wide-ranging conversation about music, marketing, and money.  For a while, little seemed to happen following our dialogue, but slowly, some of the things we discussed started to come to fruition.  Bernie kindly credited me on his album as making a contribution to his renaissance, alongside pyrotechnics rock icon Arthur Brown, Twisted Sister’s Dee Snider, and Ginger Wildheart.  It’s possibly the best feedback I’ve ever had, beating 10 out of 10 on a conference feedback form!

Bernie typifies many musicians, in so far as I found him to be a gentle giant.  Unassuming off stage, thoughtful, intelligent and passionate about his art and many other topics from philosophy, history, literature, environmentalism, and politics.  Many people think of rock musicians as being extroverts, but I sense Bernie gained a lot of his strength from a more introverted sense of reflection.  After all, all on stage performance is merely theatre and projection.  That said, the rock business is a vicious business and sometimes this means that quieter talents get pushed out of the queue by the narcissists.  Bernie maintained his authenticity throughout his career and he stands out for that quality alone.  His concern for humanity also extended to all God’s creatures.  I recall him insisting that a wasp nest in his garden be left alone despite the anger of the “yellow vests” around the back door of the studio!  This quality of seeing everything in balance seems to be a rare quality.  It reminded me of our own fragility and the need to realise that we are all part of a delicate ecosystem.

Bernie Tormé has two sides to his music.  One inspired by his Celtic roots via sublimely beautiful acoustic songs.  The other, pure hard Rawk ‘n’ Roll with the unique flavour of his guitar harmonics.  Rather that writing about it, take a listen to the two distinctly different styles.

For Bernie’s Celtic acoustic feel try Spirit Road. The last song on his last album “Farewell to Arms” is a poignant Celtic drone with an unique mix of harmonium and guitar.  Take a listen at Farewell to Arms.  For pure hard rock listen to Flow and Dublin Cowboy.  Both of these songs feature Bernie’s trademark guitar harmonics and dive-bombing tremolo use, which set him apart from the crowd.

Bernie is also a talented songwriter and lyricist.  I was captured by the song he wrote for Randy Rhoads who died in a plane crash, forcing Bernie to step literally into the dead man’s shoes.  It seems apt here.  Listen to Good Man Down and Party’s Over, the title piece to this article. For an insight into Bernie’s music, see our conversation via the interview.  I was honoured to have performed with him a few times on stage at his gigs in London and Brighton.

The last thing Bernie and I did together was to discuss helping him write a different kind of biography.  He also kindly recorded and produced several of the tracks we made for our Rage Against The Brexit Machine project.  I recall his extreme levels of patience, tact and diplomacy when working with one of my colleagues from The Bank of England who was not a great musician, singer  nor a great diplomat himself.  I also had the privilege of watching him coach singer Madeleina Kay from a low point of confidence and competence in her voice.  This requires mastery, as you are often trying to achieve fundamental identity level change when you are trying to change someone’s art.

It’s easy to be humble and authentic when you are not in the public eye.  The pressures of fame often bring out the worst in people.  I salute Bernie for maintaining his sense of self in the crazy world of entertainment.  I thank him for teaching me mastery of the art of music and simply for being Bernie Tormé.  Rest in Rock’n’Roll mate. Shall I Stay or Shall I Go?