As I was driving my twenty-something-old daughter to school, I announced that I am “throwing away the panic button.” She shouted “YES!” so quickly and loudly that I was nearly startled into the next lane. I didn’t need to explain to her what that meant. She has been caught in the wake of my overzealous panic button-pushing behavior way too many times.  All my children have been victimized by Mom over-reacting, and they’re not the only ones. I have frightened a few friends as well.

The pattern is not much different from incident to incident; something alarms me- I’m late for something important after a stressful day, or I can’t find a bill I was supposed to pay by the end of the day, my teenager isn’t answering texts, or maybe I have a deadline on a form to send in and my computer or scanner fails me.  Or perhaps it’s something more personal; I misunderstand a text, then react without pausing to think, and as a result, I feel like I’ve injured a relationship. Next, I am hit with anxiety and suddenly feel the need for immediate action to fix what I just broke. Bam! I hit the panic button and, well, I panic.

I urgently need to find it, fix it, or get it done ‘right now’.

And I act hastily and I hurt people. Or, at least, I make them wish they were somewhere else and not caught up in my drama storm.

I’ve been a ‘fixer’ for as long as I can remember. Living with a volatile man meant going behind with a hand broom and dustpan sweeping up not only the pieces of broken objects left from his temper but the social messes he made with family friends, family members, strangers in public as well.  When I no longer had his messes to clean up, I found it nearly impossible to walk away from anyone I thought I had upset in any way, or left with a bad impression of me. If I saw any problem in any of my relationships, I felt the need to fix it immediately, and the inability to do so would trigger my panic button response.

I am learning that I am not responsible to ‘fix’ all problems, all injured relationships, all the time, at least not right away.

Jesus brought three people [that we know] back from the dead: the young girl who had just died and was still in her bed, (He answered the call quickly) the young man who was being carried to his grave, (He allowed them to sweat a bit before He showed up for that one) and His friend Lazarus who had been dead for days. (His friends had given up on any miracle there.) We know from scripture scholars that in these three examples  Jesus is telling us that whether we have committed one sin, have committed many sins, or are living in mortal sin, He can bring us back from ‘death’.

But I think He’s also telling me something else as well.

I think He is asking me to be more like Him.

One might think that the most urgent of these scenarios is the one in which His dear friend had died. He was close to Lazarus, and if anyone might have the urge to hit the panic button, preventing the death of a loved one would be the time. But Jesus didn’t react quickly, and because He didn’t, this miracle was the most powerful. How then, do I think I can improve upon a situation by reacting with haste, and jumping into my “GET IT DONE AND FIX IT  NOW! (PANIC) mode?

My panic button is in the garbage. No appointment, no deadline, no form, no test or bill is as important as the people who are in the room with me when I feel the urge to fire off. No relationship is going to be better off because I reacted quickly to ‘fix’ the problem I may (or may not) have caused.  There are moments I may fall into my old habits, and I might react.. All I can do is apologize and attempt to make amends, and pray for second chances. 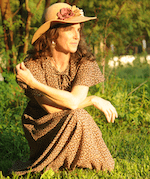 Linda Turnerhttp://dancingwithscapulars.blogspot.com/
Linda is a part-time hospice chaplain and counselor, and a full-time mother. She earned her Bachelor of Science with studies in Human Services, Corrections, and Criminal Justice, and her MS in Mental Health with an emphasis on grief and bereavement. Linda is certified as an End-of-Life Doula through the University of Vermont and trained as a labor and birth doula.  Her writing focuses on themes of healing, compassion, and moving forward through trials, drawing from her life experiences as a Catholic home-schooling single mom, as a mother of a childhood cancer survivor, a mother of a child with neuro-biological disorders,  and with her ministry as a photographer with Now I Lay Me Down To Sleep, elder care, and hospice. Linda is further studying end-of-life issues through the lens of the Catholic Church and welcomes open discussions on the topic.  She lives in the Texas countryside in a fixer-upper farmhouse with her flocks of children, rabbits and chickens, one German Shepherd- and far too many cats.