I learned A LOT of people I know have had a DUI, many of them have had several. This doesn’t lessen the severity of my crime, but it did open my eyes to how many people commit the same offense day in and day out. It is far more common a crime than I ever imagined. I’m a bartender… I know for a fact lots of people drink and drive. Lots, and it’s a little disturbing to know I helped get them to that inebriated state.

ENJOY ALL PRIOR PARTS BELOW↴

I learned that people who commit a DUI are 70% likely to do it again.

I learned I have a problem with alcohol and if I don’t keep it in check, I will be part of that statistic.  For me, it’s really quite horrific, in the sense that, if I drink too much, I black out, but I still keep going. Though, I won’t remember a thing the next day. Not one thing. It’s not enough that I no longer drive if I’m going to consume alcohol.  Even if I don’t drive, however, I’m still dealing with a problem that if left uncontrolled, I could end up in trouble. It took the DUI for me to see how destructive alcohol can be to my life. No doubt for me, relationship mistakes, friendship mistakes, and some job mistakes can all be attributed back to alcohol abuse.

I’ve learned I need to stay in constant vigilance about my alcohol consumption. I’m pretty sure this will be a lifelong challenge, even if I abstain from alcohol, which I have sometimes done, for months at a time. I now know my limit and if I ever go over that limit, it’s a planned thing within tightly controlled parameters. But the older I get, the less I can tolerate the mental anguish of a hangover, so not going over that limit is getting easier and easier.

I learned that your spouse is the first person you call in a crisis, no matter what. I didn’t, but it wasn’t because I thought John wouldn’t handle the news well, or because I thought he’d be angry. It was simply because I was feeling like the ultimate loser already. And I couldn’t bring myself to call and chat about how I’d completely screwed up, without having taken some sense of responsibility and moved forward with a plan. Having not done so would have made me feel even more lousy when talking with him, so I opted to first get my legal situation sorted. John was disappointed in that decision, understandably so, but it helped us talk through some things and remember our commitment to each other “in good times and in bad.”

I’ve been a play-by-the-rules guy all my life, so this mistake was massive to me. I didn’t hurt anyone directly, so thankfully, the fallout came down mostly on me. John was nothing but supportive and loving and I felt so bad that he had to deal with some of the consequences along with me.  We only have one car, so he also had to deal with blowing into the interlock device on the car every time he drove as well.

When I started owning it and telling people, I was quite honestly shocked at how many people would comment back to me, “yeah, that sucks, even worse when it’s your fourth (or fifth).”

In court, the judge ran through a very long list of consequences I would face if I was convicted of a second DUI within the next seven years. It was not pleasant. There would be a loss of my license for a much longer time, a much weightier fine, and of course, a longer jail sentence. Having spent not quite a full 24 hours in jail was enough to convince me I do not want to experience that again. Though, at this point, I think my growing claustrophobia would end me long before any jail altercation might. 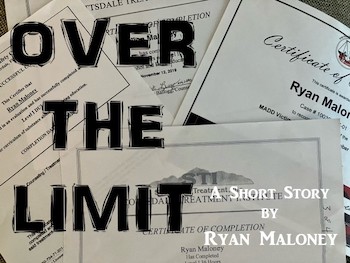 There’s a part of me that knows that while my DUI was a serious crime, and I’m in no way trying to make light of it, I also know it’s a mistake, plain and simple. People make mistakes all the time. My attorney friend Becca stressed that point. It’s a mistake and it will not define you; you will get past it and continue to live your life, I remember her saying. It’s how you right yourself and adjust your behavior going forward, if you’re to learn from those mistakes. I’m still learning. I’m learning about myself and my lifelong relationship to booze. I’m just now understanding how I’ve let that go unchecked for a long time, but I feel a bit better now having gotten a bit of a handle on it.

I’m also fully aware that on the spectrum of behaving badly, getting a DUI is hardly the worst kind of offense one could commit. I know there are those folks out there for whom getting a DUI might just be that bummer thing that happened last Tuesday, nothing to freak out over. It’s just something that happened and they just get through it. No big deal. But obviously, for me, it was a big deal.

In the end, as out of this world as it sounds, I have to be honest with myself and be grateful that the DUI conviction happened.  Hard to stomach the $12K+ I spent, but I’d do it again, to learn the lesson. The reason is because I was on a path headed for something much worse. I kept pushing it because I was getting away with it. After the DUI, I was haunted by thoughts, and I’m in no way being dramatic here for effect; I seriously was haunted by my own guilt. For months, my brain wouldn’t let me not think of what could have happened. Had I gotten into an accident, and caused hurt and pain to another human soul, or worse, I know I’d go absolutely insane from the guilt.

On occasion, I’m still haunted by those thoughts, and I’ll say again, I’m thankful I am. It’s another tool that keeps me in check.

When people document these kinds of events in their life, oftentimes, after the person reveals their “awakening” or whatever, the after-tone of the writing can come off as judgy and I’m hoping no one who reads this gets that vibe. I am in no way disparaging others for their desire for alcohol, and I’m not saying anything “bad” about alcohol. It’s all about the individual, and my words are about me. I had to first deal with the massive self-shaming which is likely tied to how I was raised, where right and wrong was very clearly black and white – there was no mistaking a situation, a behavior, a reaction.  Right was right and wrong was wrong in my family, and it was just expected that you’d know which was which. It definitely took going through the entire experience and even writing it down for me to fully understand the depth and breadth of my relationship to booze.

For some, that’s probably a scary prospect to analyze, but for me, I’m fairly certain that it has helped me understand my behavior better and the reasons for it. And that’s not necessarily a fun exploration exercise. But I can’t escape who I am, so it’s just better for me to face it head-on, and hopefully, trying to understand the “why’s” will help prevent me from making unwise choices going forward. For me, in regard to drinking to excess, that means trying my best to make choices that protect not only myself but the ones I love and the strangers I don’t know, but who have the same right to live free from the threat of a thoughtless drunk driver.