My attorney told me my arrest wouldn’t prevent me from leaving the country, as John and I had planned to go one last time to Torremolinos, Spain before we settled and restarted life in Florida.  (First-world concerns, I know…)  In any case, while we were in Torremolinos that summer, I learned that I was to be in Arizona for my court date in October.

The time in Torremolinos was bittersweet.  This was before Covid, and while I think we thought we’d be back at some point even if we didn’t know when exactly, I’m sure we didn’t think we’d stop visiting completely.  But Covid had different plans.

Anyway, by the time I went to Torremolinos, at the start of July of 2019, I’d been living with my mistake for about 6 weeks.  The shock had worn off, and the dread of what was to come and what I had to face was starting, but I tried hard to put it aside.

Torremolinos holds a special place for John and me and we just soaked up as much fun as we could, knowing that I was going to have to re-engage with life again after we got back to Florida to find a job and deal with the DUI.

It was in those early visits to Torre that we fell in love with the lifestyle we experienced and then re-created for ourselves in Florida.  A key point in that “lifestyle” was walking everywhere. We didn’t have a car in Torre, so we walked everywhere or took public transport if we had to go a longer distance.

The other thing about Torre is that it’s small-ish and feels compact, and for me, for whatever reason, that feels safe.  I can understand better now why people sometimes stay their entire lives in smaller communities.  Like other small towns, there’s a calmness and quietness there, while at the same time, during “season”, if you were out on a weekend night where the bars are, you’d think you were at Mardi Gras on a Super Bowl weekend. It can get super crazy there, and John and I used to regularly get caught up in that craziness too. And even then, I over-indulged in alcohol but because we never drove anywhere, I thought it was OK. Except it wasn’t OK. I just kept repeating a behavior in a different setting, where I perceived it to be acceptable. I’d just sleep off the hangover and repeat the “fun” a couple of days later.

Part of my issue at that time was that I had nothing else to do.  What is that saying about idle time being the devil’s playground…  That pretty much summed me up to a T.  I was on a break from a traditional job, and surviving on savings, so I wasn’t stressing much about anything.  Anyone who knows me well knows I’m a heavy stressor from way back. I have the high bp to show for it too! And boozing doesn’t help!  But during that period while we were in Torre, I felt like I was in a bubble and didn’t have to worry about “real life” for a while, so I tried my darndest to turn off the stress and instead, accentuated the party.

While in Torre, I was definitely still in the mindset of “it’s fine, I can walk home, and I’m not hurting anyone so it’s ok to get hammered.” Never mind I sometimes had to be helped home by a not-so-happy John.

We wrapped up our Torre-time in early September and made our way back to Florida to start our new life there, but not before this kid had to venture back to Arizona for court in early October. 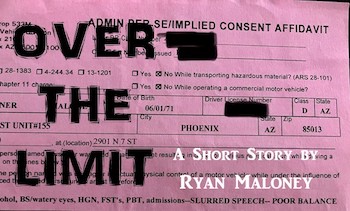 After several months of postponements, the day of reckoning as it were, had finally come. Dick came to the court with me for moral support. My attorney arrived and briefed me on what was going to happen. It all played out exactly as he said, and after it was all said and done, I learned my fate…

And with this guilty charge, the penalties, court-obligated classes and therapy, and of course, the fees, were as follows:

– 7 days of ankle monitor (monitors alcohol intake which tested me 48 times per day, for a total of 528 tests to ensure sobriety for the full 7 days) $185

And it didn’t stop with Arizona’s penalties.  When we moved to Florida, and I applied for my driver’s license, the Florida Dept of Transportation immediately revoked my license for six months upon learning of the DUI in AZ (after applying for and receiving it) and then also required me to participate in another 12-hour substance abuse curriculum before reinstating it.

To take my case, my attorney normally would have charged $5000, but he was doing a favor for a good friend of mine, so he reduced his fee to $2500.  And he charged another $1000 for assistance in asking the Judge to expunge the conviction after I’d completed all the court-ordered requirements.  The Judge agreed, but the conviction still shows up (background checks), two years later, post expungement.  My Global Entry privileges have been revoked indefinitely, it appears.

The interlock installation was around $250, and every month, they debited $90 from my account, for 12 months.  At the end of the year, they charged $175 to remove the device, for a grand total for this penalty of around $1500.

A word about the interlock device – it is very sensitive.  I once, stupidly, out of habit, after putting gas in the tank, used an alcohol-based hand sanitizer and just the slight aroma of alcohol was enough to render my car stalled, right there at the pump. Other drivers were not happy with me. If that occurs, the device gives you ONE chance to attempt to start your vehicle again.  If it fails, your car ignition locks permanently and will not start (plus, the system sends that information to the State, and if that becomes a pattern, your time with the device is extended). You then are required to have the vehicle towed to the place that installed the device for them to unlock it.  Luckily in my case, after 15 minutes, I tried again, and thankfully, my car started.

It’s difficult to calculate the increase in insurance costs due to the DUI because we left Arizona for Florida, and Florida is more expensive in general for auto insurance, due in part because Florida is a no-fault state.  But without a doubt, our insurance increased more than a little.

I was told in Arizona that the DUI would be on my driving record for 36 months, which ends in April, 2023.  In Florida, however, it stays on the record for 75 years.  In my case, I’m not sure how this will play out, because the DUI didn’t originate in FL but the state knows about it, and it’s here where I hold a driver’s license.  We are insured obviously, in Florida, so I’ll have a better idea when we renew insurance again next June, 2023.

All told, with flights back and forth to AZ for court appearances, attorney meetings, and jail, plus all the fines, as well as several other ancillary costs, my out-of-pocket was north of $12,000 for committing the crime of DUI in Phoenix, Arizona.

Though my paperwork indicated I’d have to serve at least 7-9 days in jail (based on the assumption I’d get the interlock installed in my car, which suspended 21 days of the 30-day jail sentence), that was ultimately reduced to just an overnight, which was an interesting experience, the details for which come next…