On Lefse and Her Spirit

–The best holiday traditions bind loved ones together, and making lefse is no different

As a child, I would gleefully look forward to what felt like a national holiday here in the Midwest, the deer-hunting season opener. It was on this weekend that friends and family would descend on our house and my grandparents in southern Minnesota to embark on gathering game for the coming year. I would sit around the table and listen to the elders talk about one that got away, the turkeys they saw, or some such thing.

While the hunt provided meat for our family for months, the weekend was also about kinship. This same weekend, all of my aunts and many female cousins would gather at my grandmother Ella’s house and make lefse. Yup, the guys did their thing and the ladies did theirs. The women, under the strict guidance of Ella, made enough lefse to give each her kids (five) and each of her grandchildren’s families (18) enough lefse to make it through the holidays.

At age 9, I was old enough; I was allowed to participate in this most hallowed weekend. Not as a mere tablemate but as a fellow hunter. In my young mind, this was the gateway. I was becoming a man.

Somewhere along the line, I stopped hunting deer with a firearm. I was still very avid outdoors but enjoyed big-game hunting by archery. As the annual big weekend approached, I found myself wondering how to spend time with family. I had always wanted to learn how to make what all the people in the river bottom called “Ella’s Lefse.” I was a little nervous (or perhaps intimidated) at the thought of spending a weekend immersed with this group of women, but I had a gut feeling I needed to learn.

One morning I called up Grandma. “Grandma, I know this is the ladies’ weekend, but would you be willing to take a guy into the group and teach me how to make lefse?” She was elated. Dear Reader, understand that she was a reserved and proper (read: stoic) Norwegian woman. I saw her get excited only a few times in my life. Sure, she always had a warm smile, but to see real excitement was rare, and she was excited.

Early one Saturday morning in November, while the rest of the guys went out on the annual hunt, I arrived at my grandmother’s house to learn to make lefse. The house had been converted to a mini-factory, with the implicit intent to make as much lefse as possible in a few days. My aunts and cousins greeted me at the door with hugs and the warmest welcome a guy could ask for. My grandmother, about 84 at the time, also greeted me with open arms. She whispered in my ear as she hugged me “Oh, Aaron, I am so glad you came. You are the first of the boys to learn how.” She then proceeded to pat me on the cheek and put me straight to work. (I later learned that I was the only male in the entire family to learn my grandmother’s art of making lefse). She told me, “Aaron, you’re going to start by learning how to cook a batch. Tomorrow, I will move you to rolling, and the next day, you will learn to fry.” I simply said, “Yes ma’am; where do I start?”

In my humble opinion, milk lefse is better in that it can be made thinner and holds its moisture better, but then again, I am biased.

I may have gotten ahead of myself. While I doubt any of you reading this in The Norwegian American don’t know what lefse is, the non-Norwegian visitors to your home over the holidays need to know lefse is a traditional Norwegian soft flatbread. The sort most commonly made now uses potatoes, flour, and milk; we refer to this as “potato lefse.” However, the recipe from my grandmother’s family uses lard, milk, and flour. She contrasted it with potato lefse by calling it “milk lefse.” In my humble opinion, milk lefse is better in that it can be made thinner and holds its moisture better, but then again, I am biased. The earliest lefse in Norway did not contain potatoes. This “traditional” method was carried back here to America by my grandmother’s parents.

I looked down at her hand, her skin that showed her age and years of farm labor.

Anyway, Grandma instructed me to place the milk in a large pot on the stove and turn the burner on a low-medium setting. She then showed me a large spoon. Another important note: my grandmother didn’t measure anything! At this point in her life, she was legally blind. So she did everything, including baking, by feel. She placed the spoon in my hand and instructed me to fill it full, rounded, heaping—“but not too much.” So I dipped the spoon in the lard and pulled out a big spoonful. Just as I was about to put the lard in the pot, she stopped me. She stood alongside me and ran her hand down my arm. I looked down at her hand, her skin that showed her age and years of farm labor. Yet there was an insurmountable strength there in that small and fragile-looking hand. When her hand reached mine, she cupped it firmly in hers and made a gentle up and down motion.

She was weighing the lard!

She told me I did not have enough. So I dipped the spoon again, bringing out more. The pattern repeated. This time, my hand holding the spoon, her hand holding mine, she weighed the lard. “Too much!” she said. And so it went until I was able to draw out the “precise” amount. I added it to the pot. I slowly stirred, waiting for the mixture to come to a light boil, as the lard melted into the milk.

I was then instructed to take a two-cup sifter and fill it heaping full of flour. I sifted the flour into a large brown pottery bowl. Three times I filled the sifter and emptied it into the bowl. Each time, Grandma would take my hand and “weigh” the flour. I would guess it was about eight cups, but again, it was all by feel. We used my eyes and her hand to guide my brain and muscles to the proper proportion. The boiling milk and lard mixture was added to the bowl and then we mixed it together. The hot mixture was then pressed down into the bowl to push out the air, covered with saran wrap and a towel, and placed outside to cool.

While the houseful of my aunts and cousins worked, rolling, frying, and packaging, I spent the day in the kitchen, my only job making the batch on the stove and mixing it with the flour. I think I made 20 batches that day. Each time, grandma would hold my hand and weigh the lard and flour. True to her word, the next day I joined the team in the basement and spent it splitting the batch of dough into four “logs,” then portioning each log into 12 pieces and rolling one of those out to about 18 to 20 inches in diameter.

Grandma Ella would stop by and “feel” how thick our rounds were after rolling them out. She liked them thin, and thankfully I had a knack for rolling them nearly thin enough to read a newspaper through. On the last day, I learned the art of frying the lefse. I burned a few, but with the help of my Grandmother and one of my aunts, I quickly got the hang of it. I had passed. My grandmother, satisfied with my progress, left me alone with the whole group the next year, only pulling a round off a griddle to taste-test a few times a day.

A few years later, in 2008, two days after Mother’s Day, my grandmother passed away. On the day of her funeral at a country church in southern Minnesota, an old apple tree back on the farm bloomed for the first time in my life. I have a hard time not believing that was my grandmother sending us her farewell. The early Norse believed the apple blossom symbolized rebirth and I cannot imagine a more appropriate symbolism.

Later that year, the whole family gathered again for Christmas in Grandma’s house. It was still joyous, yet we all felt a hint of sorrow. We all missed her. After all, she had been the matriarch for many years. My aunts approached me with a present. I found this odd, as we did not regularly exchange gifts. This gathering was always about bringing the family together to celebrate Christmas and our family. Nevertheless, I opened the gift, and inside found my Grandmother’s brown pottery lefse bowl. It was the bowl my grandmother had mixed thousands of batches and the one in which I had mixed my first. I was overcome with tears as I held that bowl in my hands.

I still make lefse around the holidays, mixed in an old brown pottery bowl. Each time I do, I feel the physical presence of my grandmother at my side. Her hand cupping mine, helping me weigh the ingredients.

Our deceased loved ones remain present in our lives in many ways: in what we learned, in our traditions, and in the way they made us feel.

Sometimes, when we need them most, they still hold our hands.

This story is dedicated to my grandmother, Ella Loretta Skogen (1913-2008). Thanks for being my teacher, Grandma. I love you.

This article originally appeared in the Dec. 15, 2017, issue of The Norwegian American. 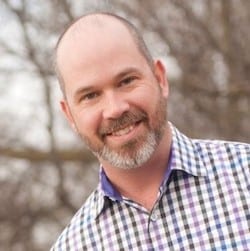 Aaron Skogen
Aaron is one of those professionals who successfully blends his personal and professional lives with solid management skills, warmth, and an ability to lead large teams. He is an accomplished senior leader with experience across the manufacturing, operations, CPG, supply chain and engineering disciplines. His most important roles and passion, that of a loving father and husband, provide plenty of material for him to share. He writes to share ideas and generate a conversation. Most often you will find him writing personal stories exploring the correlation between our personal and professional lives.