Of Hoofs And Horns And Humans

Before I read this excerpt from the book, Farmer Able by Art Barter, I opened to the forward of the book written by one of the leaders I most admire, Ken Blanchard. In his remarks, he writes, “As a purveyor of simple truths, I can tell you one of my favorites: people who feel good about themselves produce great results, and people who produce great results feel good about themselves. Read this lovely parable and you will see how servant leadership pays off for everyone. With that, I decided I could use a story that taught me more about the servant leadership culture in organizations. Following is the guest post written by Art Barter, author of the book Farmer Able.

The pigs are running the farm. So begins the story of Farmer Able. Everyone on his farm — people and animals alike — are downright downtrodden by him. He’s overbearing and compulsively obsessed with profits and productivity. He’s a typical top-down, power-based manager, forever tallying production numbers in his well-worn ledgers. But the more he pushes the hoofs and horns and humans, the more they dig in their heels. That is until one day when he hears a mysterious wind that whispers: “It’s not all about me.” Can he turn things around and begin attending to the needs of those on his farm, thus improving their attitudes and productivity?

The following is an excerpt from chapter 10 of Farmer Able.

What the cows didn’t or rather couldn’t begin to fathom were the goings-on in Farmer Able’s mind—or rather in his deeper constitution. His small little world had been rocked by—of all things— wind and bugs. The farmer sat there on that milk stool, perched like a dumb turkey on a fence post. And though he appeared inactive, his thoughts were anything but.

It just couldn’t be, he thought as he considered the cryptic phrase. It all was like a strange nightmare to him. That’s it. It was just some crazy dream. I knew I shouldn’t have eaten that I-talian food, the farmer reasoned, pronouncing the “I” like “eye.” (Patience had cooked up the dish from a recipe in one of her lady magazines.) But somewhere inside he knew the memory was entirely unlike a dream and certainly not oregano induced.

For a moment he did reconsider the obvious: He was just overworked and overstressed. Any diligent farmer usually ignores this. After all, hard work is what you do. Those who complain are simply whiners or slackers.

The fact was, the farmer could not embrace what this really implied. He’d have to change the way he was doing things. If stress was indeed the problem, then surely he should find a better way to operate.

But was he ready to change things? No.

“Bah!” the farmer finally said out loud. This brought an immediate flinch from Clarice and a ripple of twitchy excitement down the whole row of cows. Again, however, fortunately for Clarice, it wasn’t followed by a slap. No, the farmer issued a rebuke. Seeing that Clarice was not touching her feed, and once again mindful of the little book of numbers in his bib pocket, he yelled, “Why aren’t you eatin’ you dumb cow? Food makes milk. And your production is down.”

Well moo-moo-to-you, Clarice thought. The nerve of that guy. All this rattled around between Clarice’s horns. However, with no opportunity for real communication, Clarice simply issued an agitated harrumph to herself. And then that nervous, twitchy mastication started in. She began to chew, chew, chew even though she was only chewing air.

Farmer Able noticed this incongruity. “What are you chewing on, you idiot cow! You’re chewing on nothing.”

Again the farmer certainly heard none of this. He could not understand that his sour stomach—and sour outlook—had provoked hers. Anxiety certainly has a way of hijacking others. He finally shook his head, said “Ah heck!” and turned on his heel and walked away.

The rest of the day, Farmer Able came up with a litany of excuses meant to dismiss what had happened. But the more he tried to remove himself or rather remove that darned message— It’s not about me—from his head, the more it remained. He couldn’t get away from it and it wouldn’t extract itself from him. Yes, it was ludicrous. The whole gosh darn phenomenon was as nutty as a Christmas fruitcake. But the resounding words were beginning to indicate that he, in fact, was the tough nut to crack. 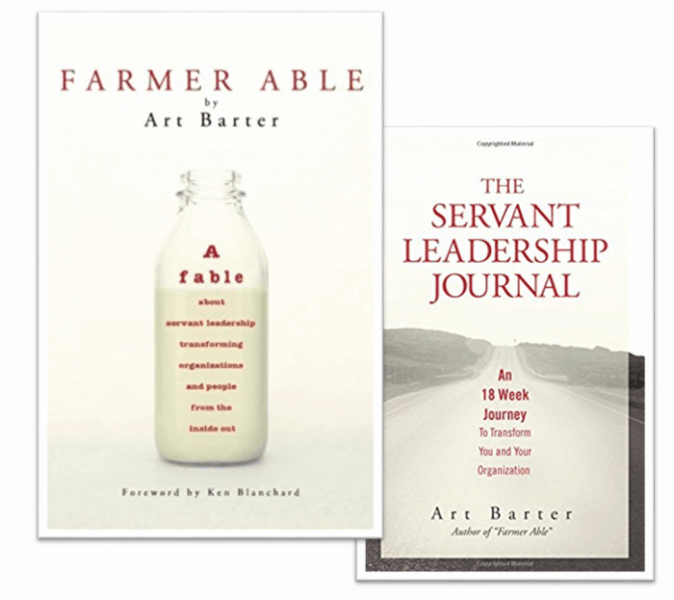 Art Barter believes everyone can be great, because everyone can serve. To teach about the power of servant leadership, Art started in his own backyard by rebuilding the culture of the manufacturing company he bought, Datron World Communications. Art took Datron’s traditional power-led model and turned it upside down and the result was the international radio manufacturer grew from a $10 million company to a $200 million company in six years. Fueled by his passion for servant leadership, Art created the Servant Leadership Institute (SLI).

To learn more about Art and his new Servant Leadership Journal, as well as his book on servant leadership, Farmer Able: A Fable About Servant Leadership Transforming Organizations And People From The Inside Out, endorsed by Stephen M.R. Covey, Ken Blanchard , and John C. Maxwell , visit www.servantleadershipinstitute.com.

Eat That Frog: 21 Great Ways To Stop Procrastinating And Get...

Character Is What You Do When …