No Is The Most Loving Word You Can Say 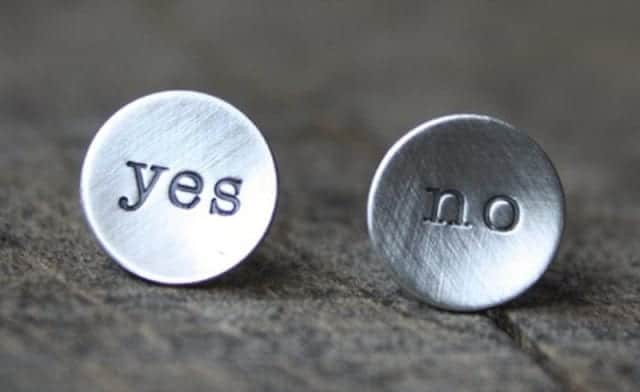 “Would you stop being so GD’d boundaried and just tell me what you really think and feel?”

Sitting at our high-topped kitchen table on a Sunday morning I clutched my breath, tilted my gaze upwards at the popcorn texture of the ceiling and paused. Have you ever noticed how the mass of kernels sit suspended above you like a torrent of hailstones just waiting for the right conditions to explode? My decision to her question would determine whether the two of us would be battered by that hail.

As I stared at the hail trapped in the ceiling I felt tremendous fear. I briefly contemplated the thought of not giving her what she asked for. I heard myself say, Don’t do it, Kenny, don’t do it, She is just scared, you need to be strong for her, for the both of us. But, I wanted her approval, I wanted her to love me, I wanted to please her. Wouldn’t the loving thing be to give her what she wants? Shouldn’t I say “yes?”

So I did. I gave her all of it. For the next 4 years, I spewed it all without a filter. Everywhere we went every conversation, every activity. I released an avalanche of hail upon us both. Like a Buffalo winter, no matter how fast you shovel, the snow falls faster, covering whatever path you thought you had dug out. Our marriage died that day but it took me several years to realize it.

That one little “yes,” turned into countless more. The accumulation of those little yes’ resulted in my returning to drink after over 20 years of sobriety, an escalation in my sex addiction and my allowing myself to pursue a career she wanted that left me completely dependent upon her financially and emotionally. Another devastating consequence was the distance that slowly and imperceptibly began to creep into the marriage. “Yes,” creates that!

About a year before the marriage ended I had tried one last time to say no to her. We met with our counselor, the man who had originally taught me about boundaries and the value of saying no after my first marriage. When my wife and I started dating she began seeing his wife, also a counselor, who helped her learn the same skills. We married in part because we learned to speak the same language and share the same ideals that we had learned from them. In short, my wife learned how to say “No” as well!

In that meeting, I asked her to end what I felt was an inappropriate relationship, an emotional affair with her business partner. She said “No.” You would have thought I would leave that instant but I couldn’t. All of my little yes’ had skewed my thinking so badly that I was now addicted to and imprisoned by the relationship. My life was now dictated by my need for her emotionally and financially. I had no power and no safety, I could see no way out. That is what saying “yes” did. It caused me to lose touch with who I am. So much so that I started seeing specialists because I began losing my mind. I had periods where I would fall into a stupor for days, unable to move, consumed with fear, pain, and emptiness.

I remember the last one. I was laying in the sun enjoying a peaceful respite from the inner turmoil when out of nowhere a feeling and picture started to form in my brain and body. I literally saw and felt this tsunami coming towards me. You can’t outrun something like that. It is too big, too powerful, so you just succumb. As I laid there in the crucifying Arizona sun, I was being enveloped in the coldness of the emotional wave that was washing over me. I felt myself carried back to my apartment.

After three or four days of being dragged across the empty landscape inside my heart and mind, I called my wife. I hadn’t seen her in two months. She was “pursuing her business” in another state. I told her she had to come, that I didn’t think she could do anything to help me but that I needed someone around or I was going to have to get to a hospital.

A few months later she made a choice that exploded her business partnership thus ending the affair and for a brief period, she turned back towards me. I knew it was only because she was afraid, but I couldn’t verbally say “No” to her so instead I used my sex addiction to communicate my “No.” It was the best I could do! She said “No” to my behavior and we separated shortly thereafter.

The resulting withdrawal nearly killed me and had me contemplating suicide. I have suffered tremendous physical and emotional trauma in my life but nothing compared to this. Grief and pain are difficult things to experience so sleep is a great break and respite from both. To find myself awakening from a deep sleep in the middle of the night sobbing and crying uncontrollably, to literally be crying in my sleep is a feeling I can’t put into words.

My inability to say “No” broke me so heavily and inflicted so much pain upon myself that it sent me on a path of discovery. I discovered that all of the success books out there trying to teach us that we need to alter our thoughts to become who we want. I learned it doesn’t work that way, our brains don’t work that way. It helped explain why I couldn’t say “No.” Intellectually I knew I should say “No” to her request but emotionally I couldn’t. That is because literally, every single thought is just a by-product of a feeling we are experiencing. Yet what are we taught about feelings? Don’t have them, don’t talk about them and don’t deal with them. The single greatest tool that determines our ability to succeed, be happy and have productive relationships, none of us have been taught how to use.

Furthermore, we have been conditioned through stories, movies, tv and song that the most loving thing you can ever say to anyone is “yes,” That we must sacrifice everything for the other person if we really love them. I can now say without hesitation that in almost every situation, “yes” is the most unloving, backdoor manipulative and destructive thing you can ever say in a relationship! I thought through all of the times I said things like, “but I have done/been doing XY & Z for you and you won’t even do “A” for me!” I now see how I was trying to manipulate love and care from them. I was using “yes” to make them responsible for my needs! That isn’t kind or loving. It’s no wonder the divorce, addiction, obesity, illness and disease statistics are so high. It’s no wonder my life had spiraled out of control, It could be no other way.

My choosing to drop my boundaries in the kitchen with my ex-wife was manipulative and abusive to us both. My saying yes, was an attempt to extract love from her, I wanted to make her like me so I could feel better. That is my job, not hers. Conversely, her unwillingness to give up her emotional affair was incredibly loving. She told me exactly who she was and what was important to her. She was authentic to herself and to me. That IS love! She was telling me that the marriage no longer held a primary place in her life, that her business and this other person now did. I chose to ignore her honest rejection of the marriage and in the process, I further victimized us both.

I say “No” a lot now. I have learned how loving that is to me and you!

Kenny Weisshttp://www.coachkennyweiss.com/
KENNY Weiss is a Coach and Speaker who is at the forefront of the personal development field. Through his own personal journey and nearly 30 years of studying about the role emotions play in our lives, he brings a one of a kind skill set to the individual or business that is looking for more success personally and professionally. For centuries emotions have been avoided so they are our least developed skill, yet every single decision we make is based on emotion and not thought. We literally feel before we think. In addition, we have all been through some sort of trauma. This sets us up to repeat and relive the trauma in every area of our life. I personally repeated mine through multiple addictions, two divorces, a bankruptcy, I played two professional sports I never wanted to play and I contemplated suicide. In other words, I have not only studied this process, I have lived it and overcome it. That has left me with an ability to walk into any room and in a very short time be able to see and feel what emotions are keeping an individual from success and happiness. Kenny’s clients have included, entrepreneurs, professional athletes, individuals and families who have come to agree with what the current science now tells us….. Emotions are at the center of everything we do and therefore, they need to be the first place we look for an answer.