I live in Southern Wisconsin and am fortunate to have access to many great shore fishing locations within short driving distances. I fish a lot—with family, friends, and sometimes alone. We have the Wisconsin River (one of my favorite go-to destinations), as well as many lakes, rivers, backwater sloughs, and even world-class trout streams to choose from when it’s time to go angling. My fishing gang has targeted everything from rainbow and brown trout, bullheads, and panfish, to some larger game fish such as northern pike, largemouth and smallmouth bass, musky, and most recently some trophy-sized walleye: I brought in a 28-inch, 8-pounder along the Wisconsin River.

One thing I have realized over my many years of fishing is that catching fish is a bonus, above and beyond the experience of being out in nature, spending time with family and friends, watching amazing sunrises and cloud formations, seeing eagles and hawks soar through the sky, and just connecting with the outdoors.  Many times, we will not catch anything—the solunar calendar might not be at a peak time, the weather might not agree (beautiful sunny days with high pressure are notoriously bad fishing days), or a host of other reasons may determine that the fish just aren’t biting. But for me, deciding to go fishing is an exercise in continuous improvement, persistence, and patience all wrapped up together, and the experience itself is worth the trip. My friends and I sometimes hike into some remote places, which adds another layer of adventure to the experience as well.

Occasionally, we get to our coveted spot, select a favorite lure, and send it out only to get a strike on the very first cast. Nothing screams excitement more than a first cast smash, reeling in a largemouth bass or other game fish present in the waters we visit. But a first cast hit is unlikely; we’re more apt to get nothing on that maiden voyage of lure, and even for a while after. This leads us down the road of patience and persistence.

In life, the first cast is important because it signifies action. Many times, we make plans or have dreams, and never act on them.

Getting to a fishing spot and experiencing the first cast, after the anticipation and excitement of what you might catch, is an initiation into the experience that awaits you and progress toward the goal of bringing fish home. What goals or dreams do you have that you are waiting to do the first cast on?

While I have been blessed with a great fishing experience, there are many times this past season when I stood and cast dozens upon dozens of times, without a sign of a fish. Occasionally I would have a strike right out of the gate to build up the adrenalin and get my attention, and then I would go for an hour or more with no action. By brother-in-law and I will do the traditional chant of “Here, fishy, fishy, fish!” a few times, but I am not sure that influences the target audience; it’s more for our own entertainment. However, what has sometimes had a positive result for me was to announce “next cast” when I was reeling in after no action.

You see, there is always the mystery of what might happen the next time you send the lure sailing. When nothing is happening, you might consider giving up, switching lures, or trying another spot, but at what cost? What if the big one you’ve been searching for was ready to strike on your next cast? I have experienced this first-hand several times throughout the fishing season; the positive mental attitude toward future success seemed to create some sort of power outside of myself that would beckon the fish to my offering. I would sometimes think about it, and occasionally even announce it aloud that the next cast would produce a strike. And I swear there were times when it did! A walleye or bass would hit my lure with a huge splash, and fight all the way in. I would look around for validation and declare out loud, even when I was alone, that I was right to throw it out there in that very spot one more time instead of changing things up.

So how might this concept of “next cast” apply to the rest of our lives? Well, for starters, we need to keep trying things for longer than most of us think. Too often we attempt something new, or start a habit, and don’t give it the amount of time necessary to get some traction and momentum going.

Many things need us to stick to them so that they become engrained into our daily routine before results will show. Dieting and exercise are perfect examples of this, but new ventures in business or marketing also need the “next cast” approach applied to them sometimes for success. Give up too early; you won’t realize the fruits of your labor. Your next cast might be the next customer call or meeting. It might be one more shot at the formula you were trying to work out in the lab. A new social media post to spark interest in your ideas. Or saying yes to a future speaking engagement even though you aren’t nearly ready to step onto the stage. Who knows what you’ll catch because of stepping out of your comfort zone?

At some point, you might be compelled to change rods or lures because of inaction to see if that will bring you a catch. You might even choose to move to a new location. These are all acceptable choices, if you’ve given your first choice a fair chance at producing a fish by doing enough “next casts.” Maybe top water lures are not drawing the prey up to the surface so you should switch to a swim bait or spinner. Maybe fast isn’t working so you slow it down with something along the bottom.

Likewise, in life, we also must cast doubt on those habits or relationships that are not working to take us in the right direction. There is a point when you realize it’s just not working out and that a change is the right answer. What seemed alluring at first is not producing results like we hoped for after giving it an honest try, so moving on or ending a relationship might be the best choice. Nobody wants to do the same things repeatedly with poor results in life; at some point, persistence becomes your enemy. Is it time for a new marketing strategy?

Alas, even a great fishing day must end at some point. I commonly pre-plan an end time for a fishing excursion, and even if it’s not hopping, I will stick it out until close to that time. If it is fruitful, I might stay longer, but inevitably you must decide when to do a last cast. But as I walk back to the car and load my gear up for the drive home, whether there’s a stringer full of fish or not, I can always rejoice in the beautiful experience I had with nature and think about the next time I will be back for my next cast. 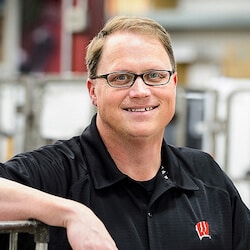 Rich Gassenhttps://campussupervisorsnetwork.wisc.edu/
Rich Gassen was born and raised in Wisconsin and is a lifelong resident of the Madison area. He supervises print production at UW-Madison’s Digital Publishing and Printing Services, focusing on empowerment and autonomy with staff, and process improvements. He came to the UW in 2010 after working in private sector print shops for much of his career. Rich also chairs the planning committee for the Campus Supervisors Network (CSN), a community of practice at UW-Madison with over 1300 active members. CSN supports other supervisors in their roles, offering training and networking events on campus, a weekly newsletter, and a website of resources. CSN facilitates group discussions, book clubs, and other events, and also mentors other leaders on campus. When not at work, Rich enjoys spending time with his wife and two adult boys in the outdoors and fishing the many lakes and rivers of southern Wisconsin are the main hobby of choice.