My Outside is Not My Inside, Damn it!

Our eyes met instantly. Gumshoe saw the unmistakable flash of fear coupled simultaneously with the confusion and the dread on the female clerk’s middle-aged face.  Genuine shock and bewilderment were genuinely apparent.  No voided bladder, thank God!

She was probably thinking to herself, “Not again!  Why did I take the nighttime shift?  I hate this job!”

Gumshoe heard her sudden gasp of breath as she unconsciously stepped haphazardly away from the front counter inside of the “7-11” convenience mart. She brought her arms up and her palms were exposed and figuratively pushing this unwelcomed intruder away.  She was the exact spitting image personified of the “Flight or Fight” syndrome but she remained frozen in fear.

A pregnant pause is in order gentle readers in order to provide you with some context. Southern California street cops referred to the local “7-11’s” as “Stop & Robs”.  Since they were routinely the victims of armed robberies. They were always located “freeway close” and were open 24/7 year-round and not just from 7 to 11 as the brand indicated in bright red letters on the storefronts. The modern marketing sale strategy consisted of the multiplicity of store locations (freeway close) and with the perpetual hours of operation effectively targeted the motoring public looking for their slurppies and assorted sundries.

This marketing strategy had the downside of making the stores easy targets for the drug-addicted-street-scum- bags who wanted to make a quick score of some ready till cash.  No coins don’t cha know?  More often than not, these miscreants, misanthrope bipods would be armed and the clerks were assaulted and just shot for being too slow or for not being able to open the drop floor safe.

Ready cash (disposal income) was demanded by these mutated DNA humanoids reject to obtain their next few “fixes” of their poison of choice to their wasting away bodies.  Heroin, tar heroin (uncut), crack cocaine, meth, whatever was the “flavor of the month” on the street drug market trade that also was opened for biz 24/7 year-round for the targeted customers.

Yes, Gumshoe had two handguns concealed on his person along with a visible buck knife, but they would not be displayed under the fluorescent lights.  Gumshoe had to remain in his uncomfortable, undercover mode silence and demeanor.

Street Narc 101:  Never ID as a cop unless it was to another cop or when you positively had to safeguard a life.  You see folks,  criminals sometimes come in pairs and have backup crook cretins that just might be behind you when you stupidly reveal your true colors.

Gumshoe was clad in his filthy-looking and smelling narc uniform that was worn day in and day out.  You really have to be all in looking and playing the part from bad breath, dirty fingernails to unsightly nose hairs.  Street thugs don’t do the day spa treatment. 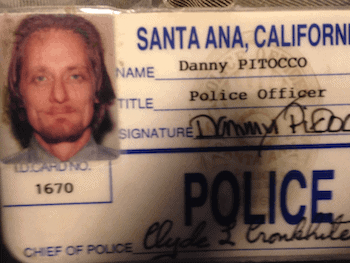 Faded tattoos were readily visible on Gumshoe’s face and neck.  A teardrop “tatt” below the left eye; a set of lightning bolts on the right side of the neck and a small colored “Tweety Bird” graced (perched) on the left side of Gumshoe’s neck. Gumshoe also grew a so-called beard that looked like the rear end of a dried-up road-killed raccoon. Gumshoe would think of the words of his Parris Island Marine Corps D.I., “Why are you cultivating the hair on your face that grows wildly on your ass, maggot?”

Note:  Our unit had a contact from Universal Studios in Hollywood who supplied us with the real-to-life tattoo decals that the movie actors wore.  They could not be rubbed off in sweat or rain. Gumshoe learned how to maintain them thanks to some Vaseline.

Gumshoe frequented the market for the customary loaf of bread and a carton of milk. Just going home after a long day of buying dope; developing informants (busted street prostitutes) for undercover “intro’s” to their connections (dope slingers); writing search warrants; executing search warrants (while wearing a balaclava to shield Gumshoe’s face), and providing back up surveillance of fellow narc’s plying our undercover street tradecraft. Adrenaline rush junkies are us!

Gumshoe would crack a frozen smile to attempt to break the clerk’s tension and quickly pick up the foodstuffs from the aisles and return to the frozen clerk at the service counter. Gumshoe’s smile would never ever be returned from the clenched jaw and pursed lips of the mortified clerk.

No expected threats of gimme or cash followed by a street expletive the clerk probably thought much to her chagrin. Cash and carry, out of the store for Gumshoe and back astride of his motorcycle also probably much to the relief of the totem pole clerk.

Funny, it was rarely that Gumshoe ever saw the same clerk again at the same 7-11. Minimum wages for some jobs is just not enough, or come to think of it, even for the salary of an undercover street narc.