My Mother’s Voice – Our Voice, Our Legacy

My mother left a house filled with things: things she found valuable, things she couldn’t part with because she might need them someday, and things she had forgotten about long ago. It took a long time to clean out the house after her death in 2006; and I marveled at the amount of stuff she managed to accumulate in the old house where she’d lived since 1960.

Shirley, my mother, was a painfully timid, self-conscious, and quite socially awkward person – resulting from having to quit school as a young teen to stay home and care for her rambunctious younger brothers, an ailing mother, an absent father, scraping by in a very low socio-economic status family. My father was the only man she’d ever dated, and they got married because she became pregnant with me. My sister came along four years later. Shirley was in some ways a typical 1950s-type housewife, but with a low-wage seasonal canning factory job and a cleaning job for extra money.

By her own words, my mother had dreams and aspirations that would never be accomplished and a life that was unfulfilling.

She had abilities but no confidence to pursue, or even set, goals for herself. She taught us how to function in the world and “act like we fit” – a skill that has served me well. She cared for my father, who had muscular dystrophy and later multiple myeloma, and then me with my life-saving kidney surgery, as best she could. She was taken for granted and often spoken to (undeservedly) harshly by her family members, so she never spoke up for herself. She frequently expressed regret for a life unlived.

Her voice was quiet, hesitant, and tired – the sound of sadness. She sighed often. I heard the familiar resignation in her voice on the answering machine she kept near the wall phone in the kitchen. Even on her recorded message, her reticence was evident. Listening to her voice on the recording, I felt her presence in her old house each time I went there to clean and sort, and felt comforted hearing her speak. Every item was part of her story in some way, and her voice on the machine brought her back, even for a few moments.

On one visit, I noticed an increasing scratchiness and “static” sound when I pressed play. I resolved to play the message only once each time I came to the house, even though I wanted to hear her voice. It was unsettling, but logically, the crackling sound increased as the little cassette tape wore down. But I had to play it as soon as I entered the house – she was greeting me, as always.

The time came for everything to be removed and the house to finally be sold. We arranged for a dumpster, a rummage sale, an auction, and a listing with a realtor. The long process was finally coming to closure. When the house was empty, and everyone had left, I took a final walk through each room, calling to mind our life in every corner of this tiny old house. I picked up a few last remnants, including the answering machine, which I set on the kitchen counter and pressed the play button to hear her voice one more time before leaving the house.

All I heard was the hissing and scratching, and then my mother’s voice, mid-message, ever-so-faintly saying “I’m not here now…” and the rest of the tape was noise. I played it again and there was no sound of her voice. I knew it was inevitable but gasped in shock, nevertheless. Her voice, which had kept her alive to me, was silenced forever. She was telling me she was no longer here, in this old house, or on the earth. The answering machine was now just another “thing” to be disposed of.

Regardless of the relationship we have with our mother, she influences us in many ways. Our mother’s voice affects us like no other.

I listen more closely now to people’s voices – each with a unique and easily identified sound. Our voice states who we are with every word we say and the way we say it. Our voice is part of our legacy. My mother’s answering machine kept her with me for many months after her passing, until she told me she was “not here now”, and I could let her leave the world and take her place in my memories.

Whose voice do you recall, etched into the soundtrack of your life? 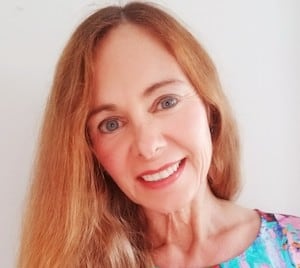 Lisa Elsinger
Lisa Elsinger, Ph.D., is a lifelong advocate for taking care of body, mind, and spirit, so we can live this precious life with vitality and give our best to the world. She leads the Live Well at Broward College employee wellness program, where she integrates health and well-being into employee experience and organizational culture-building strategy. Committed to helping people integrate healthy habits into busy lives, Lisa emphasizes a “no extremes” approach, and provides regular insights on lifelong well-being via Well-being Wednesday, a weekly newsletter; Purposeful Pauses, weekly mindfulness, meditation, and rejuvenation breaks; interactive department and class sessions on multiple aspects of health; and ergonomic workstation assessment and remediation. Lisa values being immersed in the College’s altruistic initiatives, advocating for student and community health, and empowering people to share their stories to support and inspire others. She loves the breathtaking seaside sunrises in South Florida, farm animal sanctuaries, learning about all things neuroscience, music, and the experience of waking up, getting up, and showing up each day to make the world a better place, one action at a time.

Finding Beauty in the Imperfections of Ourselves and in Life

Disability Pride Month – Acknowledging and Valuing Diversity in All Ways