–Introducing: My Hometown Travels...and tell us about yours!

by Arie Boris
In light of the COVID pandemic, our routines have been and continue to be radically changed.  Much like Alice Through the Looking Glass, my world, as a travel writer, has shrunk to the confines of the Upper West Side of Manhattan…my home for the last 35 years.  Rather than heading to the airport to catch an international flight or board a ship to sail the seven seas, I leave home daily(wearing my mask) for a 2-3 mile walk thru my “hometown” to get some urgently needed exercise and frankly just to get out of the apartment!  Inadvertently, my daily “mental health” pilgrimage has introduced me to several local hidden gems, that until now either I overlooked or took for granted.  All are unique and would warrant a visit next time you find your way to the Big Apple.

In that spirit, I invite you to reciprocate.  Share something special or meaningful with us about your hometown, region, state, or country…something you would want us to experience if we were able to visit…maybe a park, a restaurant, a store, or local sights.  Just a paragraph or two and several JEPG’s and we’ll post it.  Travel is about people, not just places and we would love to hear about something you feel is special about your “hometown”.  Here is to awakening the travel writer in YOU!

At the corner of Broadway and 80th in the Upper West Side of New York, there is a legendary food emporium.  For many New Yorkers, going to Zabar’s is equivalent to the Hajj…that is, if you could get the best lox & cream cheese on a bagel in Mecca!

Zabar’s is a specialty food store featuring a seemingly endless variety of foods and culinary paraphernalia…far beyond the impeccable selection of the best in traditional Jewish appetizing.

Known for their smoked fish, the hand-sliced Nova salmon, smoked whitefish, and sable are considered among the very best in the city.  Bakery delights, based on homemade family recipes, include classic Mandel bread, babka, and home-style rugelach…the names may sound foreign, but the tastes are pure heaven!

The family business was founded by Louis and Lillian Zabar in 1934.  They emigrated to the US from the Ukraine in the late twenties to escape religious persecution after Louis’ father was murdered in a pogrom. The business started with a small storefront and today spans an entire block.

The Zabar family built their reputation with not just a variety of fine smoked fish, but also with a seemingly endless variety of fresh olives, incredible cheeses, and age-old Eastern European recipes.  Along the way, Zabar’s has been known for its innovation.  Back in the 1960s, the family-run business introduced New York to Brie, and in the ’70s they brought sun-dried tomatoes and gnocchi to the Big Apple.  They were the first to introduce and sell today’s ever-popular drip coffee makers.

Walking into Zabar’s, don’t expect white-glove service. You tell them what you want, you pay, you get it and you’re bowled over by how good it is…very much the quintessential New York experience! It is such a New York icon, it has been mentioned in movies like “You’ve Got Mail” and episodes of Will & Grace and Sex in the City.

They have a small cafe with bar stools where you can enjoy a bite before going into the main store for the serious take-home shopping.  Next time you are in New York, say goodbye to Times Square and say hello to Zabar’s in the Upper West Side! 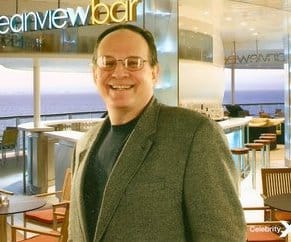 Arie Borishttps://www.cruisegourmet.com/
CruiseGourmet.com Magazine is an Internet publication with a focus on food, wine, and cruise/destination travel. Renowned travel writer, food critic, and Vacation Maker Extraordinaire, Arie Boris, hosts this lively and engaging web magazine. “CruiseGourmet.com” combines the best of travel, dining, recipes, and destinations. Last year, more than 30 million people chose to cruise. Along with traditional ocean-going cruises, there has been exponential growth in river cruising and taking hosted group theme cruise vacations. Based on consumer feedback, cruising offers the best value and consistently maintains the highest level of customer satisfaction for any vacation package. As Editor-in-Chief, I bring with me extensive travel industry experience, including business and sales development for commercial aviation, the International emergency assistance & travel insurance industry, and a national association of travel agents. I was a contributing editor to several print and Internet travel publications, including Fieldings’ Worldwide Cruise Guide and was part of the start-up team for CruiseCritic. I have written over 450 cruise ship reviews. Along with publishing CruiseGourmet.com Magazine, I produce and host Cruise Gourmet Voyages, a variety of fundraising & theme group cruises for various charitable and arts organizations. I have produced theme cruises for a variety of special interest groups including fans of opera, broadway, spiritual retreats, and fan clubs for TV shows like Dark Shadows and Dancing with the Stars! There is a theme cruise for everyone and I hope you will join me soon on a Cruise Gourmet Voyage designed for your non-profit charity or special interest group! Bon Voyage and bon appétit!