Author’s note: If you have not read the original story below, please take a moment to do so.  It will help you understand this story.

I stood staring at the modest brick building – white shutters framed the windows – a covered concrete pad held up by two columns lead you to the double doors that served as the entrance.  Another covered area was on the left-hand side of the building and parked there was the traditional black hearse.  I turned and looked in the parking lot again – just one car.  Silently I prayed, “Lord, are you sure this is the right place?”  Then I felt that unexplainable feeling that I was exactly where He needed me.  I removed my hat, ran my fingers through my hair, took my backpack off, placed it in my left hand with my hat, and opened the door.

On a small table in front of the coffin was an old picture of a young man in uniform.

The cool air caused me to shiver as I entered the foyer.  I thought to myself, “They keep these places so cold.”  I stood and listened.  From down the long hallway, I could hear the faint sound of someone crying.  Two doors on each side of the hallway told me that these were visitation rooms so that folks could walk in the first door and exit out the second door.  I slowly walked toward the door on my left and stood there.  Seated in front of a flag-draped coffin was a young woman holding a handkerchief to her mouth as she cried.  On a small table in front of the coffin was an old picture of a young man in uniform.  I had to squint to see the Marine Corps emblem on his cover.  I smiled to myself, quietly walked into the room, and took a position at a respectable distance behind the young woman.

“So, he was a Marine.”  My voice surprised her and she turned to size me up.  My dusty combat boots, blue jeans, a black tee-shirt with a Marine Corps emblem, and the words ‘Proudly Served,’ beard, and unkempt hair were probably not what she expected.  She stared for a long time.

Finally, she answered, “Yes, and he was proud of it.”

“As we all are – you know what they say.  Once a Marine, always a Marine.  Before the rest of the family comes, would you mind telling me about your Marine.”

Again, she buried her face in her handkerchief as tears began to slowly roll down her cheeks.  Finally, she gathered herself, “I am the only family Grandpa had left.  My husband had an important meeting today and our children had after school events so I am ‘the rest of the family.’

I looked around the room and saw a chair.  I retrieved it and placed it next to her.  I placed my backpack and hat on the floor and sat down next to her.  “I still want to hear about a fellow Marine.  Please tell me your name and then tell me about your Grandpa.”

Again, the long stare.  Finally, she realized I was not moving, “Heather,” as she extended her hand and I gave it a gentle shake.  “Grandpa was George Bowman – Corporal George Bowman at your service as he liked to say.” 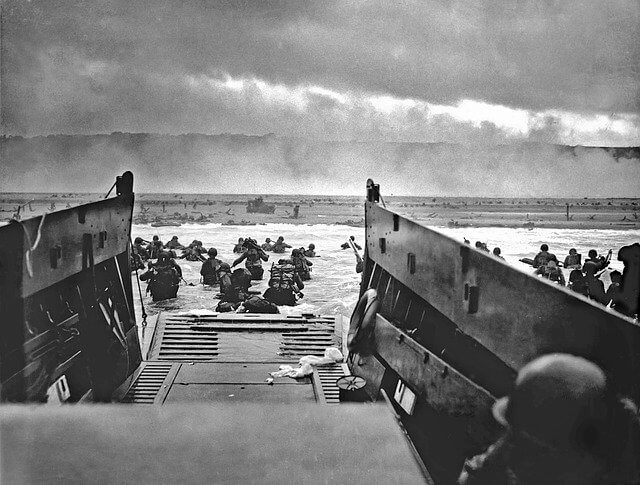 Heather began to tell me of a young man who, against the wishes of his parents, dropped out of high school and enlisted in the Marine Corps during World War II.  He had been lucky to spend most of his early years in the states.  But at the end of 1943, he was shipped to England for a big mission.  It would become known as D-Day and he watched so many of his buddies die on Omaha Beach as they made the big push to get the Germans to withdraw from France.  Even though he was wounded, he dragged his fellow Marines who were shot to a small covered area to provide first aid before going back into the gunfire to get the next wounded comrade.  His actions earned him a Purple Heart and a Bronze Star.  He wanted to finish his enlistment but his wounds were so bad that he was medically discharged after a long stay in a Navy hospital.