One of my favorite Bad Company songs is “Movin’ On”. (I still think the late Boz Burrell is a tremendously underrated bass player.) But I can tell you, after last week, at least for now, movin’ on is one of my least favorite experiences.

I’ve written elsewhere (here and here) about the travails Anne and I have been through in finding and acquiring a new home. We had no idea the best was yet to come.

Our moving day was May 24th. The closing date for the house we sold (in South Windsor, Connecticut) was May 25th (at 1:00 p.m., to be precise). We were as ready as we could be for both (especially since we’d packing for an initial closing date of April 28th.)

Anne and I aren’t hoarders. We’re not terribly materialistic. We disdain clutter. And we were diligent about giving stuff away, donating it, or consigning it as we packed in preparation for our move. But when I saw the truck from the moving company arrive, I said to Anne, “That thing’s too small.” As regular readers of my lunacy know, I hate it when I’m right.

On the morning of the 24th, I headed to our new abode (in Middletown, Connecticut) to meet the cable guy. He was coming to install our new service. When I arrived, the place was spectacularly unfinished and crawling with contractors — painters, electricians, plumbers, carpenters, and a landscaping crew that was running around the property with two tractors, churning up dust which wafted in through the doors and windows, all of which were open because of the proliferation of contractors and the dearth of air conditioning.

As it turns out, the owner/developer from whom we bought the place (a narcissistic, micromanaging cafone, who doesn’t know what he doesn’t know and doesn’t care) had systematically pissed off a series of contractors, all of whom walked off the job at various times. (Hence, the reason we hadn’t closed and moved on April 28th.) The contractors who were present on May 24th were the ones he could scrounge up at the time. Several of those have since have since quit, as well, including the landscaping crew. (See the photo at the top of this post.)

The friendly neighborhood Roto-Rooter guy returned the next morning (Wednesday, move day plus one) to jackhammer the concrete floor in the basement in what turned out to be a successful effort to restore waste-plumbing functionality — without having to go outside to dig up the front yard and the new sidewalk to the front door. And when he was able to run the camera down the sewer line, he determined it was clear to the street. One bullet dodged.

Somewhere around 2:30, back in Middletown, I determined it would be impossible for us to sleep in our new abode that evening. Somewhere around 3:00, as the cafone was leaving, he instructed the remaining contractors and me to leave the house open that night, doors, windows, and the bulkhead in the basement.

“Not so fast, Kemosabe,” I said. “At some point later today, two moving vans will show up here containing all of our worldly possessions. After that, we’ll be finding somewhere else to sleep, since this place isn’t ready to be slept in, thank you very much. All things being equal, I’d prefer not to put that stuff up for an overnight, five-finger discount free-for-all.”

As close as I could get to determining his reply, it was something along the lines of, “Harumph.”

The two moving trucks arrived in Middletown at about 3:30. They didn’t finish unloading until about 8:00. Because of the work still being done in the house, almost everything had to go in the garage.

At this writing, we’re now into day eight in our new house. It isn’t a home yet because there are still contractors working here. Most of our belongings are still in the garage. Our cars are still outside. What was supposed to have been our yard is still a dust bowl. We can only shower in the guest bathroom because the other two showers don’t have doors on them yet. The badly cracked driveway hasn’t been replaced yet. And the house has failed to earn its Certificate of Approval from the City of Middletown on the past two consecutive Fridays. The next inspection is scheduled for June 6th. So, we’re still haunted by periodic visits from the narcissistic, micromanaging cafone, who’s managed to learn nothing from the fiasco he precipitated.

But as of yesterday, all three of the bathrooms in the house have doors on them. (Until then, there was only one bathroom with a door. Privacy is overrated.) We have the kitchen pretty well organized. (See the photo below.) New locks are being installed today. We were able to put our bed frame together last night and sleep above the floor for the first time in a week. We’re adjusting slowly and getting a little more accomplished every day. Believe it or not, we’re actually happy here. Inconvenienced? Yes. Happy? Definitely. 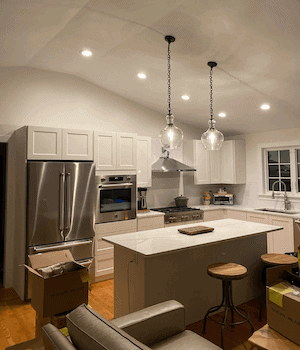 Last Sunday, we were granted a welcome reprieve from our moving efforts. One of our grandchildren, Nora — daughter of our son, Quinn, and our beautiful daughter-in-law, Katie — is enrolled in The Griffith Academy of Dance. She’s taking lessons in Irish Step Dance. (You expected what from Nora Quinn O’Brien?) The Academy put on its annual recital at Wethersfield High School, featuring dancers from the age of two all the way up through graduating seniors in high school. To say it was magnificent and joyful is to sell it woefully short.

At the end of the program, the Academy awarded scholarships. Of all the children in the pre-school program, Nora was awarded the only scholarship. She will attend the Academy for her next year of dance at no charge. That’s Nora in the photo below. And if you must know, yes, her proud Grandpa bawled like the Irish softie he is. But I wouldn’t want that to get around. 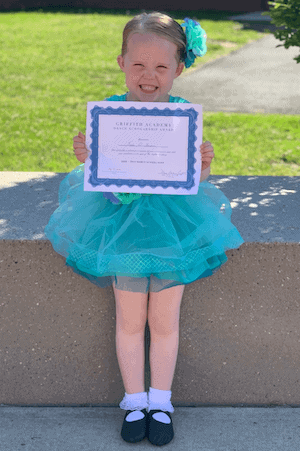 Happy? Definitely. Blessed? Without a doubt.