Mindfulness for the Distracted and Mediation for the Focused

Does that sound familiar to you? What a waste of nerves and energy that is!

This happens because we are constantly thinking about a thousand things at a time. Well, not at the same time, but our thoughts follow each other so fast that we perceive them as all happening at the same time. So we are locking the door, which only takes a tiny bit of our attention because it’s automatic, and while we do that there’s space in our head for a whole bunch of other thoughts. And then we’re standing at the bus stop and we just cannot remember having locked the door.

Our mind is constantly talking to us about a thousand relevant or irrelevant things, it doesn’t stop commenting, complaining, urging, criticising, praising, insulting, comparing, judging, regretting, shouting, whispering, laughing, whinging, suggesting… It won’t leave us in peace for a single second. With its constant chatter, our mind spends a lot more time in the past and in a hypothetical future than it does in the present and so we often miss out on the present because we are either stuck somewhere in the past or racing ahead of our time. Even a trivial thing like locking a door only happens in that very moment, and if we are somewhere else while it happens, we’re missing out.

You might have come across the concepts of “mindfulness” and “meditation”. They might evoke pictures to you of either some incredibly fit individuals sitting in flashy yoga clothes with their legs crossed and their eyes shut in some tropical dream landscape, or of a bunch of Buddhist monks in their orange garments. And you might think that none of that has anything to do with you and with your day-to-day life. Same for me! But I have been practising mindfulness for many years now, and meditation for a long time too, and I think they are two amazing things to bring into your life.

Mindfulness and meditation are often used as synonyms, but they are not exactly the same thing.

Mindfulness is the mental state of being fully present, so aware of where we are and what we are doing that we don’t react to things happening around us and don’t get overwhelmed by them. Meditation follows mindfulness, it’s the next stage, where we shift our attention from the purely physical awareness of the moment to the observation of our thoughts and emotions.

The better we are at mindfulness, the more likely we become to be able to meditate. It took me years to get to that stage.

I had my first glimpse of some mindfulness the day I discovered deep relaxation when I was 17 years old. It was a mostly physical thing for me then, but still, it got me a few steps further in my life.

I think that’s one possible and certainly good way to get started. Relaxing your body completely, then giving your full awareness to every part of it, and then listening to your breathing is a great first step.

Then around that same time, one day I had a flash of awareness that was going to put me on my track. It was on a warm summer day and I was sitting outside eating an incredibly beautiful, perfectly ripe, absolutely delicious peach. I was left with the last two bites when I realised that I hadn’t given that wonderful thing a single thought and that I had eaten it without even looking at it, without savouring it, I had just wolfed it down thinking about something else. How could I have missed out on that?? It then took me as long to eat those last two bites as it had taken me to eat the rest of the peach. After savouring and appreciating them to the fullest, I realised that the way I ate the peach was a perfect mirror of the way I was doing all other things as well. And if I wasn’t even able to give my full attention to eating, which has always been one of my absolute favourite things, how the hell was I dealing with everything else?? Absent-mindedly!

Over the following years even though I tried to be a bit more present to the moment and to concentrate on things a bit more, I would often forget to do that, then remember again, do it a little bit on and off, then forget again…

And somehow, even though I always kept practising deep relaxation, which is a very mindful thing to do, I hadn’t come across the concept of mindfulness yet and wasn’t sure what meditation was, exactly. Still, I started developing my own, action-based form of mindfulness back then (this was around 1987, no internet, not much information nor inspiration), which I took to a good level, I think, over the years. I started practising giving my full attention only to what I was doing in that moment and nothing else. My favourite training ground was – and still is – cleaning the kitchen. Have you ever tried washing up and only washing up? Without listening to music, thinking about what you’re going to do next or that you’d rather be doing something else? Without getting distracted? Giving your full attention to the soapy sponge in your hand, the plates, and cups, the movements of your hands? Not wandering with your gaze, only looking at what you’re doing without checking out the clock or the weather or whatever? Without judging whether it’s boring or pleasant or a necessary evil or that you’re short for time and without making a phone call or shopping list in your mind? Basically, without listening to the chatter of your mind, in perfect silence within? It’s less easy than you might expect.

Just watch the thoughts and words come, don’t judge them, just go back to your focus.

No matter whether you practise mindfulness from a place of deep relaxation, or sitting, or in action, you’ll see that your mind will constantly try to distract you from it. It will throw often random, usually loud thoughts and words at you. That’s normal. Don’t try to shut it down, that’s almost impossible to do, and don’t get angry or frustrated. Just watch the thoughts and words come, don’t judge them, just go back to your focus. It will happen over and over again, every time you get flooded with thoughts, the moment you realise you’re drifting off, just go back to your focus. At the beginning you might drift off for a long time and forget about your focus altogether, but then with time and practise this will happen less and when it does, you’ll realise straightaway. You’ll become able to decide whether or not you give any attention to your passing thoughts. All thoughts are passing. Some will come back more often than others, and when it gets bad we call them obsessions, but they all pass and we can eventually get to a point where our attention to them is so small we hardly notice them anymore.

If you’ve never tried mindfulness before and you want to give it a go, I suggest you start with food. The same principle, remember my peach? Choose something you really like, then sit down somewhere nice and quiet and start giving it your undivided attention. Look at it, notice the shape, the colours, the texture. These things will probably set you thinking about something similar you’ve had before, and off you go on a chain of thoughts… Just observe these passing thoughts and go back to your food. Then smell it. The same thing might happen again, smells are very powerful triggers for our memory…  Off you go again, and when you realise, you simply come back. Start eating it, one small mouthful at a time, and savour every mouthful as if it were the only one you had. Can you just only enjoy your food without getting carried somewhere else by your mind? Can you take your next mouthful after the previous one is swallowed and not while you’re still chewing on it?

If you get into a habit of doing one or two things this way, it becomes a lot easier applying it to other areas as well. Ideally, we would spend every single minute of our life like that, fully in the present. Of course, we could be writing or talking to someone about the past, then we would consciously think about the past, or we could make plans for the future, and then we would consciously think about the future. Everything is good as long as it’s conscious. What we want to avoid are the many “blackouts” that steal so much of our real life. 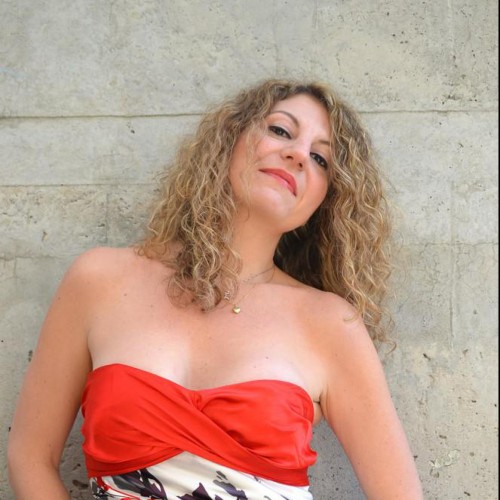 Simona Mangohttps://simonamango.com/
Simona is by nature a big humanitarian. She genuinely loves human beings and wants them to live in peace and harmony, and joy. She wants health and wealth, and growth, and love, for every single one of them. She loves animals and wants them to be respected, she loves nature and wants this beautiful planet to thrive and bloom. She’s a bit of a utopian dreamer, but she somehow believes that all of this will become reality one day. A professional classical singer for the last 20 years, a decorator and stained glass artist before that, her whole life is driven by: Beauty, she seeks and finds beauty everywhere, and strives to create more beauty with everything she does; Communication, she’s open to people and what they have to say, and willing to open her heart to them. She speaks several languages, including the powerful, universal language of art, and she always finds some way of communicating with all creatures; Empowerment, she’s been encouraging, teaching, and advising people around her since childhood. This now inspires and permeates her activity as a singing teacher and vocal coach; as a blogger and advisor on nutrition and natural health; as a network marketer with the big vision of a society where everyone is encouraged to explore their creative and entrepreneurial talents, and become aware that they have the option to create their own financial freedom while helping the community. She has a totally holistic vision of life. Her main website as a classical singer Her blog about nutrition and health. Her website about business.