The lights were dimmed and only spotlights highlighted the awe-inspiring paintings that hung on the walls.  The colors were vibrant, running the gauntlet from passion to anger and even great sadness.  The wood floor was old, dark, and had seen many people walk down the gallery.  His footsteps echoed a deep sound like that of a bass drum in a blues song.  It was not possible to walk quietly and some of the other guests turned to look.  He was never comfortable with people, but this was Olivia’s work and she sent him a handwritten invitation to come to Savannah for this show.

She had painted many of the historic homes and gardens of Savannah and their beauty was breathtaking.  The one he came to see and to buy was the one of him and her walking her dog in the rain.  Her hello written on the fog of his office window in Charleston had captivated him and after she moved to Savannah, he opened an office there so he could be close to her.  As the crowd grew, he could feel the anxiety building inside as his heart beat faster and his breathing harder.

Her name was Olivia Kline; some called her Liv, and some called her Ollie, but she never cared for nicknames. Of course, she made an exception for Joshua because, well, he was her tall, dark, handsome knight in shining armor, so when he called her Princess Liv, it just seemed right.

She was never sure why she did not like nicknames or her name for that matter, it seems like a fine enough name. It fit for both a child and an adult, except initials were not something that her parents thought about when naming her. I mean having the initials of “OK” is not terrible, I guess it is OK, but it did limit how she signed her paintings.

Speaking of which, she despised her handwriting, including her signature, and rarely signed the front of the paintings she created. Someone once suggested she just put her initials, but putting “OK” in her painting corner did not seem like an effective way to market her creations. When asked why she did not sign her work, the answer was always the same. 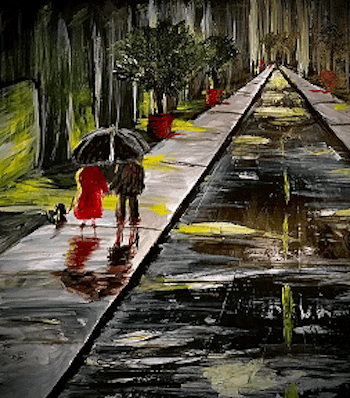 Her paintings represented her non-verbal side, her quiet side, her contemplative side. As soon as she put her name on a piece, it made it work to be handed in or scrutinized and was a clash with her non-verbal way of looking at life. In her mind, it was no different than putting her name at the top of the page of an assignment to be turned in. So no, she tried not to have to sign her creations to be able to preserve them as creations and not “work.”

Tonight exhibit was a uniquely special event. It was Joshua’s first time at one of her shows, and her already typically nervous self was especially on edge. She circulated through the display and listened to the remarks of those as they passed by each piece. One seemed to be the fan-favorite of a couple walking down a city street. That particular one Olivia did not plan on selling; it was a memory of an extraordinary walk that changed two people’s lives forever.

She found a place to have a glass of wine and some solitude while waiting for Joshua to arrive. Someone approached her, asking about the Walking in the Rain titled piece, and she saw him, out of the corner of her eye. She politely said to the person inquiring that it was not for sale and reserved for a very special owner. Then she turned, smiled, and raised her glass of wine to Joshua to come to join her.

He saw her at a table sipping wine with her dog sitting quietly and calmly by her side.  How she had changed his life and given it meaning was something he had never expected. Several people were inquiring about the painting of that rainy night, but she would only smile and say this one belongs to someone incredibly special and I hope to give it to him someday.

He stood a few feet away watching her in the shadows as she engaged her guests and told them all the stories about her paintings.  He knew that the people of Savannah had welcomed her with open arms and loved her paintings.  The paintings of her dog Vincent were very sought after and Savannah being a dog-friendly town had people lined up to have portraits painted of their dogs.

The showing was finally winding down and there were many bare spaces on the walls where paintings had sold.  He finally walked over and said, “You had a great show.  They loved your work and really came out to support you, both emotionally and financially.  A lot of homes and offices in Savannah will have your paintings on their walls.  Speaking of walls, take a walk with me down the street.”

Joshua had rented an office a few blocks from the gallery and as they walked down the street, the rain came.  A gentle refreshing rain that takes the humidity out of the heavy southern air.  Vincent was smiling his big smile, and she asked him if he remembered the first walk they took in the rain together.  It was a life-changer for them both.

They walked onto the front porch and opened the door to an old historic home.  It had a hallway down the center of the house.  On a plaque above a set of French doors was her name and all the painting she had given him adored the walls.  He hoped she would not mind because now they could truly work together.  Her office opened to a large gallery space where she could paint and display her work.  For a moment, their eyes locked.  Finally, he grabbed an old umbrella and they headed out to finish that walk in the rain.

Author’s Note:  This is the second installment of the “Midnight Reflections” Series.