– With Contributions by Josanne Anthony

It was July 13th, and I was finally there, walking around Halas Hall, beholding the great history displayed on the walls of Papa Bear.  I had just come from a four-week training camp with the Toronto Argos and was about to endure another six weeks of intense training.  I was one of the one hundred men who were competing for a forty-man roster spot and becoming one of those forty men was an incredible feeling, a dream come true.

It was then that I recollected the movie, Brian’s Song, the most inspiring movie I had ever seen.  It was about two Chicago Bears’ players.  Gale Sayers was a black man who became roommates with Brian Piccolo, a white man.  It was a time when segregation between races was still practiced.  Even so, skin color did not matter, nor did it stop these two men from forming a deep bond of brotherly love.  Their friendship had the type of love found in God’s message to mankind, “You must love your neighbor in the same way you love yourself”, which is second only to loving the Lord our God with all of our heart, soul, mind, and strength.

God’s message of love, faith, and hope was being played out across America on TV screens.  Living in Mississippi at the time, I never could have imagined a black man and white man being roommates.

It was as recent as 1969 that the Chiefs and Bengals played a game in Jackson, Mississippi and the team’s accommodations for meals and rest were at different hotels.  Watching Gale Sayers present his award to Brian Piccolo reminded me of Mark 12:31: “And the second is this: ‘You must love your neighbor in the same way you love yourself.’ You will never find a greater commandment than these.”  Brian’s Song was a role model for humanity.

My own social and spiritual conscience was awakened that night.   It wasn’t only to play football for the Bears but to walk in love toward others while on the journey.  Psalm 139 is one of the grandest of all the Psalms, for it brings us face to face with the majesty and power of God. Immediately it exalts God as all-knowing and omnipresent, and clearly shows that all of man’s life is in God’s hands.   It applies to you, to me and to everyone regardless of ethnicity.  Every nationality, every color, every race!  A portion of this beautiful Psalm says:

(Psalm 139:13-16) “You formed my innermost being, shaping my delicate inside and my intricate outside, and wove them all together in my mother’s womb.  I thank you, God, for making me so mysteriously complex!  Everything you do is marvelously breathtaking.  It simply amazes me to think about it!  How thoroughly you know me, Lord!  You even formed every bone in my body when you created me in the secret place, carefully, skillfully shaping me from nothing to something.  You saw who you created me to be before I became me!  Before I’d ever seen the light of day, the number of days you planned for me were already recorded in your book.”

When I look back on my life during my Bears’ journey, it wasn’t about just the game on the field.  For forty years it has been a bond with our fellow man and a love for humanity that pleases our Creator, beginning back in our school years, continuing until this day.

The 1985 Chicago Bears were the first sports team to have their own rap video. The song was nominated for a Grammy Award in 1985 for Best R&B Performance by a Duo or Group.  Over $300,000 in profits from the song and music video was donated to the Chicago Community Trust to help needy families in Chicago with clothing, shelter, and food.  This was consistent with Walter Payton‘s rap lyrics in the song: “Now we’re not doing this because we’re greedy, the Bears are doing it to feed the needy.”  Four decades later, all of us still raise funds together for those in need!

I am grateful that the great, majestic God chose me to Shuffle through many trials and tests.  Ephesians 1:4 says, “… he chose us in him before the foundation of the world, that we should be holy and blameless before him. In love”.  in the Book of Deuteronomy 31:6 tells us, “Be strong and courageous. Do not fear or be in dread of them, for it is the Lord your God who goes with you. He will not leave you or forsake you.” As mentioned earlier, I wouldn’t have chosen to go through 4 weeks of training camp with the Toronto Argos to be released from the team.  As I look back, I realized it was a test.  The Argos wanted me to sign a long-term contract, but when I refused, they cut me.  Hebrew 13:5 says to “Keep your life free from love of money, and be content with what you have, for he has said, “I will never leave you nor forsake you.” Additionally, Hebrews 13:1 tells us to “Stay in brotherly love”.  This reminds me of Brian’s Song, which brings me to this speech from the movie that inspired me to become a Bear: 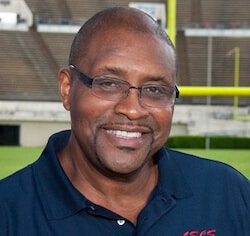 Tyrone Keyshttps://www.allsportscommunity.com/
Tyrone Keys is a former professional American football player who played defensive lineman for eight seasons for the BC Lions Chicago Bears, Tampa Bay Buccaneers, and San Diego Chargers. He was a member of the Bears team that won Super Bowl XX following the 1985 NFL season. He was also a member of the "Shuffling Crew" in the video The Super Bowl Shuffle. In high school Keys was a member of the Callaway High School Chargers of Jackson, Mississippi which won all 12 of their 1975 season games and won the Big 8 Conference championship (the Big 8 was at the time the conference of Mississippi's largest high schools).[1] In college at Mississippi State University Keys played four years at defensive tackle. In 1980 Keys made a last-minute tackle of Alabama quarterback Don Jacobs, causing a fumble which sealed the Bulldogs' 6–3 upset of the #1 Crimson Tide.[2]