I don’t remember everything about the conversation. After more than twenty-five years, I have mislaid details in that storage area of my brain that looks like the closing scene of “Raiders of the Lost Ark.” You know that scene, the one where the worker pushes the crated Ark down a seemingly endless corridor of warehoused items.

But I do recall four things:

There I was, having a drink with the eminent historian, David McCullough, author of books about the building of the Panama Canal and the Brooklyn Bridge, Teddy Roosevelt, John Adams and Harry Truman; winner of numerous literary awards, as well as the Presidential Medal of Freedom – it still meant something then. He was the brilliant soothing narrator for Ken Burns’ Emmy Award-winning documentary The Civil War; the historical interludes in the movie Seabiscuit, and PBS’s The American Experience.

Sitting across from him was one of those pinch-yourself moments. I probably nodded a lot with my mouth somewhat agape.

I was meeting with him in my role as an executive with a large school publishing company in an attempt to secure him as an author on a proposed U.S. History textbook. We met at what was billed as the oldest continually operating inn in the U.S., the Wayside Inn, located in Sudbury, Massachusetts. (Yes, of Longfellow fame.) Sitting there in front of a crackling fire, I asked him to author a U.S. History textbook that could “significantly impact student learning across the country.”

How could he refuse, right?

“I can’t,” he offered, sipping his drink. Other commitments.

But nevertheless, I was rewarded by the ideas he shared on how to better educate today’s youth. (And remember, this was twenty-five years ago!) Give them greater agency. Move away from the standard curriculum-driven syllabus. Activate their natural curiosity. These were the kinds of ideas you immediately know are right because they quicken your pulse. One idea I found particularly intriguing:

“Have kids select a photo of their own choosing from an array of photos – all without any captions,” he offered. “Have them research the photo using only the clues in the photograph. Any number of history lessons will emerge organically.”

So I tried it.

I had this photograph of a World War II bomber I’d picked up from an antique dealer because of my lifelong fascination with World War II aviation. There was no caption, but I knew the type of plane – a B-24 “Liberator” – and the plane had a name: “Bomerang.” 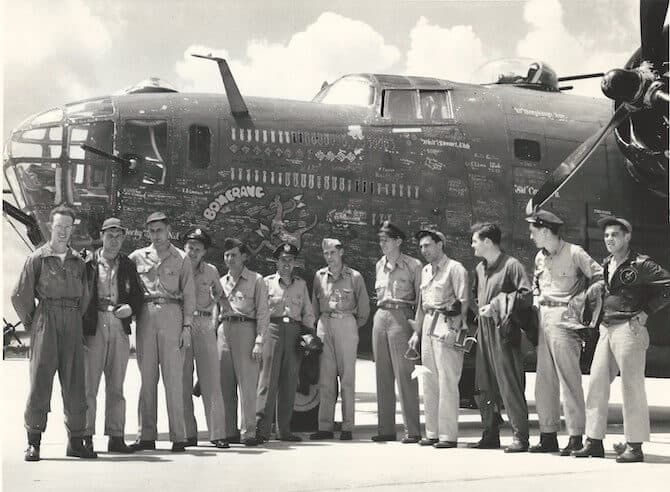 I wanted to find out more.

Over the course of almost a year, I wrote scores of letters.

I learned why those men were standing in front of the plane in February 1944 under the hot Florida sun.

I discovered that the name “Bomerang” was actually supposed to be “Boomerang” just like the other sixteen World War II U.S. bombers named “Boomerang.”  The missing “o” was the result of a simple spelling error by the person who painted the plane’s bomb-tossing kangaroo nose art. Argh, no spellcheck!

I learned that the plane had been part of the costliest Allied air raid of the war: the low-level bombing of the Ploesti oil fields in Nazi-held Romania. More than 50 planes and 650 lives were lost during the mission. “Bomerang” and crew returned to base largely untouched with exactly one cup of fuel left in its tank.

I visited what had once been the air bases in southwestern England from which the flyers and their planes had departed with full tanks of gas and full bomb racks. Next stop: Germany. Some of the runways and control towers still exist. I swear, if you listen carefully, you can still hear the roar of some twenty four-engine bombers rumbling to life before heading off on a mission.

I devoured books about the air war over Europe, which were filled with the life-ending tragic stories of individual airmen—many in their late teens and early twenties.

I gladly paid hundreds of dollars to hitch a ride in the only B-24 still flying today. How those planes held together with that incessant vibration is beyond me.

I learned about the mechanics of flight and why one wing design was superior to another.

Most important perhaps, I visited with those men who were still alive and had flown that plane in the photograph or ones like it. I asked questions and respectfully waited as these bemedaled veterans slowly gave up stories they had filed away for fifty years.

I made strong connections that only ended as the veterans passed away, one after another.

McCullough was right. The learnings emerged organically. In the end, I uncovered the plane’s storied history – its undignified ending – and the stories of many of the men standing in front of it in the hot Florida sun. 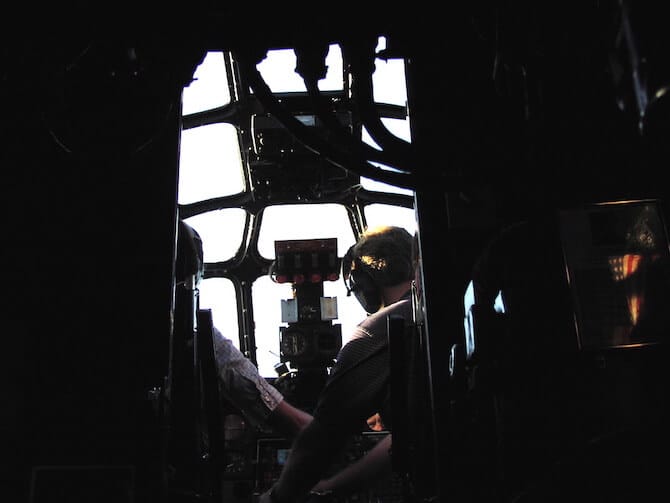 But so, too, a different side of me emerged. I went from being enamored with the romance of aircraft in war and the men who flew them to understanding about as much of the air war’s terror and horror as I could without being shot at or shot down at 25,000 feet.

I had truly touched history. And it started with a caption-less photograph.

Where do we go from here?

I started thinking about that conversation and my ensuing educational investigation because many educators with whom I talk these days are starting to think about school life after COVID-19. Thoughts range from returning to “normal,” creating a “new normal,” to completely “reimagining” school. One educator I recently interviewed summed up the thoughts of many of us who are aligned with that last category of thought:

“So much happens in school happens because we believe that we must prepare for the world as it used to exist. We continue to replicate the factory-age structures and compliance-based codes of conduct that have governed schools for decades because it feels like school to parents and politicians and school administrators.”

There are any number of reasons behind that assessment.

“Without letter grades, ‘what motivation do we have to continue working for the end of the school year?’” asked another student.

I still wince when I read that.

I don’t know – yet – how to reimagine school, but I’m pretty sure I know two things:

Do we want to continue to focus students on merely knowing content at the expense of knowing how to use that content in the context of collaborating and problem-solving?

Do we want to continue to develop students to do jobs that machines already do or will soon be capable of doing?

Or do we want to create an environment where students will select their own “photograph”– read as “global issue,” “national problem,” “local situation” “musical instrument,” “dance step,” “paint medium,” or… – and ask out of curiosity and personal interest “What’s going on here?  How can I discover more?”

What do you think? How would you answer those questions?

What sparks your curiosity? What opportunities do you take to explore it?

How School Leaders Can Create a Culture of Change