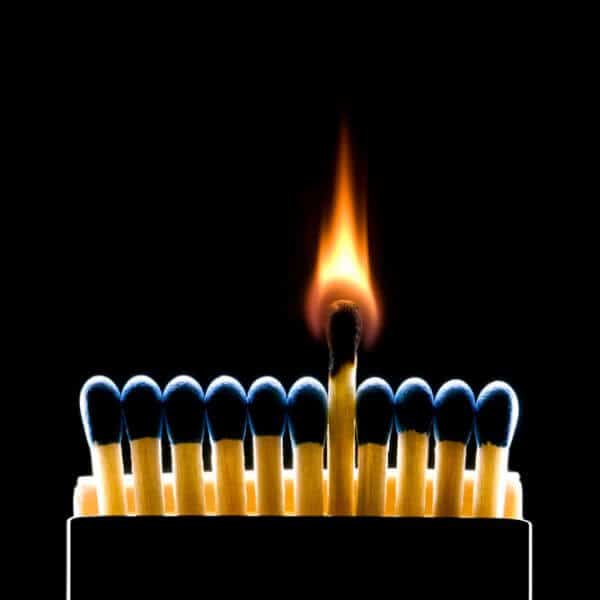 “Consider it a sheer gift, friends, when tests and challenges come at you from all sides. You know that under pressure, your faith-life is forced into the open and shows your true colors”. – James 1:2-3 (The Message)

In November 2016, terrible fires raged through the Great Smoky Mountains National Park. Fires ripped through popular destinations such as Gatlinburg and Pigeon Forge in Tennessee. It was reported that roughly 10,000 acres of land were burned.

Many thought at the time that the recovery of the forests would be years in the making. But to the amazement of many, life is returning sooner than many predicted.

In a local CBS News story, the headline reads, “New Life Sprouting In The Smokies”. Highlights of the story are given by Dr. Andrew Miller, a mycologist from the University of Illinois working in conjunction with the University of Tennessee and Savannah State University to study the effects of the fire.

Dr. Miller states, “It’s only been a few months, but we can already see fungi are growing back again”. He added with this incredible observation, “They’ve basically been sitting in the soil as spores waiting for the fires to come along, and as soon as that happens they fruit in abundance and they’re basically all over the place”.

If you hang around in leadership long enough, you will go through the fire and times of testing. It comes with the territory. So the greater question I’d like to explore with you is this: How do you plan to come through it? Your leadership can, like the fungi, rise from the ashes stronger, or it’s the place where it will die.

After 30 plus years of leadership, here are a few things I’ve learned and some encouragement I’d like to pass along.

It’s in the fire you are pruned

Dr. Miller stated, “These fungi are the first to come in, they decompose all the other stuff until the rest of the growth comes in”. What a powerful statement.

The fires you go through in your leadership are the necessary times of pruning you need for future growth. Just as the fungi decompose all the other stuff in order for the rest of the growth to come in, so too, are the times of testing that comes your way. Growth will not occur until all the things that don’t belong like bitterness, jealousy, and unforgiveness- things that you need to let go of are gone.

Right now you may not like going through the fire, but it could the best thing to happen to you in the long run.

It’s in the fire you are prepared

Another highlight from the story is that the tiny pyro-nema fungi that they’ve discovered only grow after a fire. It’s job? The tiny particles are the food for the plants and trees to grow again.

When you go through the fire, you will learn and discover new things about your leadership that you may not have known before. The fire can expose things that may not have otherwise surfaced had you not gone through it

It’s after we come through the fire we can be more empathetic, more understanding, and more mindful of growing and developing the leaders around us. How do we get new growth and new skills? By going through the fire.

It’s in the fire you are proven

I’ll be honest with you – I don’t like going through the fire any more than the next person. It’s painful and it hurts. But it’s in the fire that your leadership is proven.

Dr. Andy Methven, a biologist at Savannah State said, “It was a high-intensity burn and pretty much everything was burned down to the ground, and to see things coming up in that area just a few months after the fires is impressive,” He added, “I’ve been impressed with how quickly the plants have sprouted, even in the last month, it’s amazing how quickly it’s recovering.”

How will you recover after going through the fire in leadership? What will be the observations others make about you and your growth? What differences will they see in you? It’s in the fire that your leadership is proven and will shine.

It’s in the fire that you are productive

It’s when we’ve successfully come through the fires in leadership that we have new growth, a new perspective, a new outlook. Your leadership will take an incredible turn for the good if you keep the right attitude.

Regarding the fires, Dr. Miller made one last remarkable statement, “Probably this time next year you’re going to have a hard time telling a fire even came through this area. The soil is going to be pretty much back to the way it was before”.

I don’t know what fires and testing you are going through right now – but I do know this much – it’s a time of great challenge to your leadership. There will be times you will want to walk away, throw in the towel, and move on to something else.

But if you will keep your heart right, your faith strong, and see it for what it is – a season in your leadership when you are being pruned, prepared, proven, and productive – God will bring you through, and you will come through it stronger than ever before.

Let the fire, as painful as it is, do its work and don’t let the ashes bury you. Your destiny as a leader depends on it.

Five Ways You May Be Killing Employee Morale

Leadership For Such A Time As This