Mental toughness has been getting a lot of press lately in terms of its importance in relation to leadership – some of the press has been positive and some negative.

Mental toughness often seems to be portrayed as something very masculine and all about having steely nerves, cold-blooded calm and the emotions of plankton during the mating season!

So, is mental toughness a “good thing”? Should we have it? How much do we need? Is too much a bad thing? Here’s my take on the subject.

There seems to be no commonly accepted definition of mental toughness in psychological terms; so a starting point to understand it could be to look at the “scientific” definition. Scientifically toughness is defined as the measure of the strength of a material to withstand stress and other conditions without breaking; interestingly resilience (often used in conjunction with mental toughness) is defined as the elasticity of a material – the capacity of a material to absorb energy when it is deformed.

It would seem that in psychological terms we are talking about something that (assuming we have it) will help us to face up to and “better manage” difficult and/or stressful situations – it sounds like a good thing to have.

So, what exactly are the ingredients of mental toughness and, maybe more importantly, can they be developed? Again, there is no common agreement as to the “elements”, “competences”, “factors”, “components”, etc. that make up mental toughness; however, we (at least I am) are starting to see a certain convergence in thinking.

Some of the earliest research related to mental toughness was carried out in the mid-fifties by Julian B. Rotter and his work in on “Locus of control” (a person’s belief that their decisions and life are controlled by environmental factors which they cannot influence or by chance or fate). In the late seventies, Suzanne C. Kobasa was a major contributor when she was looking in to “hardiness” and the personality characteristics that distinguished managers and executives who remained healthy under life stress, as compared to those who developed health problems; she identified the elements of challenge, commitment, and control as major contributing factors.

Peter Clough’s work, when he was at the University of Hull, identified confidence as a contributing factor to mental toughness. 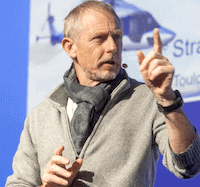 Self Confidence: The Importance of Experience