–Is Enlightenment possible in a Corporate Job?

III    ENLIGHTENMENT IN A CORPORATE CONTEXT

LAUREN:  Excellent, Justin.  With that solved, let’s talk about enlightenment – whether you experienced it, what to do about it if you did, how to integrate what you learned into your corporate work, how to recreate the NDE highs you crave, and so on.

You need answers for what happened during that traumatic event.  You need answers for how to move forward with your new knowledge and experience.  I have an unprecedented explanation for you, Justin – one which could significantly upgrade your performance while addressing your hunger for a return to the emotional and functional peaks of your NDE experience.

One of the biggest problems in talking about enlightenment is the plethora of definitions.  After extensive research into the term, I ended up having to create two separate chapters for it in Savanting (2019):  Chapter 20, Enlightenment from Extreme Self-Knowledge, and Chapter 22, Enlightenment from Flow.  While these definitions seem to be in conflict, both are met by the top-talent flow strategy I built into your job redesign, Justin.

Notice that this definition is also achievable with my top-talent-flow formula.  You’ll learn many things about yourself and your true identity when you use the reality-partnering techniques in the previous Study to figure out how nature’s machinery is trying to maximize your system.

Using my formula reveals one’s strongest talents, one’s peak performance formula, one’s true internal-external potential, the category of activity for which one is most creative, and so on.  Shortly, all of these will be known to you too, Justin.  As you implement my two-pronged job redesign, you’ll develop extreme self-knowledge.

A synonymous term in Zen for this category of enlightenment is, “kensho.”  It means “seeing into one’s true nature.”  In the West, enlightenment has become synonymous with self-realization and the true self.

“In unity consciousness, in no-boundary awareness, the sense of self expands to totally include everything once thought to be not-self.  One’s sense of identity shifts to the entire universe, to all worlds, high or low, manifest or unmanifest, sacred or profane.  And obviously this cannot occur as long as the primary boundary, which separates the self from the universe, is mistaken as real.”  ~  Ken Wilber, “the Einstein of consciousness studies.”

The result was “instant enlightenment.”  A massive amount of information and emotionality was communicated within seconds.  This was so profound, so expansive, so all-knowing, and so much an experience of pure love that often you can’t think of doing anything else but trying to get back to what can only be described as “home.”

You had access to wisdom you always wanted to possess, and it came flush with unprecedented emotional overwhelm.  Awe.  Safety.  Self-love despite the absence of self.  Being loved despite no separate entity to issue that love.

You’re undoubtedly understanding enlightenment as a no-self state of extreme emotional highs in which you have access to any knowledge at will – including about the true Justin – though Justin had dissolved into cosmic consciousness and the creative engine of the universe.  This is how you experienced all three definitions of enlightenment simultaneously and instantaneously during your medical emergency.  Do you resonate with this description, Justin?

JUSTIN:  So much, Lauren.  I haven’t been able to describe it to anyone because I couldn’t even describe it to myself.  Suddenly I understand.  Thank you for putting words to the most profound experience of my life.

LAUREN:  Wonderful, Justin.  Based on this common understanding, let’s keep going.  We need to reintegrate two conflicting identities, pre- and post-NDE Justin.  More importantly, we need to reintegrate two different understandings of the world.  Two different paradigms of existence.  Your NDE gave you a glimpse into the true workings of the universe and your true potential within it.  Let me take a stab at merging all this into something workable for you.

A non-NDE route to Enlightenment

The aperture of awareness:  Expanding consciousness is the widening of the 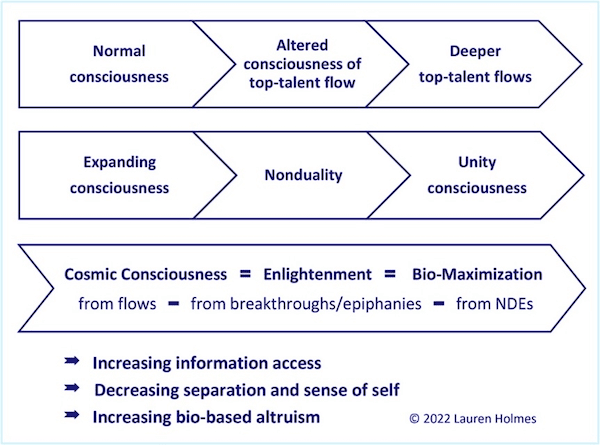 aperture through which we view reality.  I’ve described how to get it and how to use it in Lead from Expanded Consciousness.  I’ve highlighted a few key expansion points on this diagram of a consciousness continuum to give you a feel for the path from normal consciousness to the cosmic consciousness of your NDE.

Just as in your near-death experience, Justin:

I built progression along this consciousness continuum into your job redesign so you could:

There are other growth paths than expanding consciousness that are built into the top-talent-flows modus operandi I prescribed.  Pursuing these will accelerate your expansions:  see the growth sections in Study 7: Lead from Full Power and Study 11: Lead from Reality-Partnering.

Gradual versus instant enlightenment:  I researched near-death experiences so I could write the first chapter of my transformational thriller, The Encore (2018).  It begins, “I don’t remember dying thought Connor Kane as he hurtled through an ethereal tunnel.”

I was surprised to discover that cosmic consciousness, enlightenment, and bio-maximization are the same experience – whether they emerge from an NDE, from deeper and deeper flow events, or from the sudden epiphanies or breakthroughs that many of us have experienced.

Your category of “NDErs,” Justin, go directly to a 100% expansion of consciousness, to “cosmic consciousness.”  Consequently, most don’t know how to get back to the emotional highs and all-knowingness.  Many become prisoners of a lifetime of trying.  This is a plight I wanted you to avoid.

You’ve been craving a non-crisis route back to the ecstatic states you experienced during your NDE.  With this consciousness continuum, you now have it.  I’ve built it into the two arms of your job redesign.  However, I must caution against the temptation to simply pursue cosmic consciousness and stay there.  I know that’s your craving right now, Justin.

Rather, learn from watching how top-talent flow has you slide up and down the continuum based on the needs of the task at hand.  The massiveness of your infrastructure projects will no doubt benefit from your new expansive view from the top of the continuum.  But so too will the implementation details of your execution creativity benefit from the narrower focus of the lower echelons of the continuum. 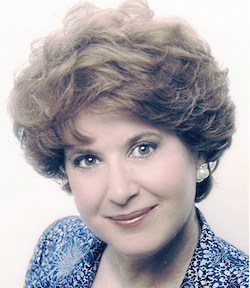