I told a friend yesterday that “a soft, sweet voice talking about gratitude does not make me want to practice gratitude. It makes me want to shoot heroin.” This was in a conversation about the origins of Get the F__k Off, and WHY I decided to create with blasting aggression and profanity.

Years ago, in my own personal development journey, I could not…. in fact I would not receive love and guidance from people who had all of my best intentions at heart. Maybe it started in 8th grade when my guidance counselor was trying to coax me into giving her information about fellating a senior in the high school auditorium. All I heard behind that soft tone was jail bars and my reputation.

I just know that when your life is going to hell, and you’re hanging off a barstool at 4:00 am in the middle of Times Square every night, people f––king screaming and doing lines in the bathroom, the last thing you want to do is hear some child whose body has never been stretched sixteen ways to Sunday talk about f––king gratitude.

A lot of times, these “tough” identities are extremely protective, developed long before we were conscious enough to know we made a choice.

And I think for me (and many people I have known in my life) it was just impossible to trust that without that external layer of protection, life could be managed at all. I certainly thought that “giving this up” or “giving that up” would contribute to an image of weakness, sadness, low energy, and lack of fulfillment and success. I thought my image was important. It was important!

(And let’s be real– I’m a lot sexier to the voyeuristic world living in New York City than if I was in Wallace, Idaho.)

And yet, it’s important to notice when that stuff isn’t giving us the life we want any longer. For me, it was noticing that anger, venom, binge drinking, making subtle slaps at others, and stacking up my ego against people were not giving me a life I desired. It was making me the opposite of what I wanted to be. It was noticing that all the whiskey I drank to try to mimic a magazine ad was not bringing me that magazine image. I was a bloated f__kwad who was eloquent for about two and a half beers. Then, I became a slur fest. It was noticing that “trying to do it alone” was just keeping me churning in a loop.

And the only reason *I* got out of it was because I had a rock bottom. My “strong ego” was not strong enough to refuse help any longer. It was forced into submission. It was forced to swallow the voices of people talking about gratitude.

But I figured out that not everyone needs to have a rock bottom. What if I could just reach people before that happens? What if I could come into a relationship with someone else and say: “it’s OK for you to hold this identity right now? I get it. You can swear. You don’t have to sit in the lotus and talk about gratitude and eating flaxseeds today.”

These hard, protective identities are 100% made up…

And yet, when we have those hard, protective identities that we developed probably because at one point in time, we HAD TO, people tend to think “you’ve got it.”

People want to just leave you be, and they don’t know how to speak your language. And they think “OK, when she’s ready she’ll come along.” (Or he will, or they…) It’s like… no. Good luck. The hard masculine ego is too strong for that.

It needs to be spoken to in a language it understands.

That it’s OK to be you as you are. You don’t ever have to give that identity up. Maybe you will want to someday. Maybe not. 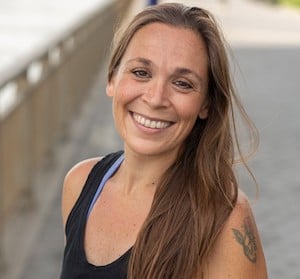 Andee Scarantinohttp://getthefuckoff.com
Andee Scarantino is a Mindset and Transformational coach on a mission to make personal development digestible. She is the creator of getthefuckoff.com, and host of The Get the F*ck Off Podcast, which deep dives into identity, limiting beliefs, and “getting the fuck off the shit that doesn’t serve you anymore.”  Andee earned her M.A. in Sociology from Columbia University in 2013. Her work incorporates how macro-level systems contribute to individual arrested development. Since a very young age, she has always had a fascination for knowing and understanding people. She spent 20 years working in the food, beverage, and hospitality industry; 11 of those years were at a restaurant in Times Square. Through that time, both while bartending and training staff members, she honed the incredible skill of active listening. Now, Andee uses her powerful voice to connect to the “greater story of us,” showing readers and listeners alike how so much of our human experience is dictated to us by things outside of our awareness. Andee is the creator and leader of a women’s coaching community, “Day 1.” The community is based on the concept that everything happens now. One of her members described it as a “beautifully powerful container full of trust, vulnerability, laughs, a few cuss words, and a whole lot of exploration.” Present moment awareness is a major component of Andee’s mindset and transformational coaching, and she’s diligent in having her clients examine their stories in between sessions. Day 1. is a reminder that every day, every moment, is an opportunity for a fresh start. Who you are today is not contingent on yesterday. A former 18-year cigarette smoker, Andee now is an avid runner and has run many full marathons since 2018. Quitting smoking was the fulcrum that shifted her understanding of how perceived identity contributes to people staying in what they believe are unmovable scenarios. Andee lives in New York City. In her free time, she enjoys running by the East River.

The End Point Isn’t the Goal