Social Entrepreneurship is defined as altruistic entrepreneurship or business intended for the social good. These rudimentary definitions do not do justice to the tremendously beneficial work of social entrepreneurs whose raison d’être is the betterment of society through business practices. The social contract between an entrepreneur and the target market is an important one in that it fosters a much deeper commitment than a traditional business transaction.

There are many such examples of social entrepreneurship, including the provision of safe drinking water to rural communities, a commitment to health and wellness, efforts to eliminate malaria from affected areas, provision of funding to paediatric hospitals, scholarship opportunities for qualified students, promotion of women’s rights, et al. In this vein, leading African entrepreneur Isabel Dos Santos certainly fits the bill in every way.

Conventional business practices tend to promulgate the status quo and all of its problems. However, Dos Santos is a game-changer. Her transformative leadership style bucks the trend and creates new realities. She staunchly advocates for gender equality by pushing women’s rights in the workplace. As a self-styled entrepreneur, qualified electrical engineer, and business leader, she understands the challenges facing young women across Angola and many developing countries. She recounts the days when she was the only woman in the room negotiating business deals. Often overlooked by the fraternal order, she had to dig in her heels and fight hard to be heard. Fortunately, her business acumen, dogged determination, and strong leadership abilities shone through.

Today, Isabel Dos Santos is revered by millions of impressionable young minds; men, women, and children. Her message resonates far and wide. As a staunch advocate of education and skills training, Isabel is changing lives and transforming communities through her collaborative and inspirational leadership style. As a case in point, she was instrumental in establishing a thriving Strawberry Plantation in Humpata, in the province of Huila. Today, 120 women are independently operating the strawberry fields and providing for their family’s needs. Many similar examples abound throughout Angola and beyond. 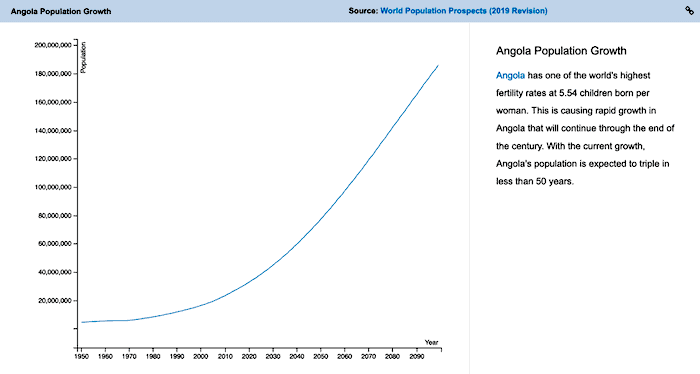 Isabel Dos Santos heads up major corporations including Unitel, ZAP, Efacec, CANDANDO, and Sodiba. Combined, these companies employ thousands of Angolans across the country and provide endless opportunities for innovation, development, and empowerment. Isabel’s deep investments in education began with her own education at the prestigious King’s College in London where she was one of only two female graduates in her class. She routinely touts the merits of promoting education and skills development that leads to job creation.

Not only is she deeply passionate about the people of her country and their plight, but she also believes in bringing Angola, sub-Saharan Africa, and the rest of the continent up to speed with the Western world in terms of technology, innovation, and intellectual capital. By focusing on the entrepreneurial flair of the country, she is building a sustainable business model which is guaranteed to pay dividends.

For example, World Population Review indicates that Angola’s population of 31,878,438 people is characterised by one of the highest fertility rates in the world at 5.54 children per woman. Without adequate skills and educational development, poverty rates will soar alongside the population growth rate. Women empowerment is the only way to uplift society, improve living conditions, and contribute to GDP in a meaningful way.

Isabel recognizes the challenges ahead and she is laying the groundwork for improved telecommunications and transportation infrastructures. At a recent international symposium, she impressed upon dignitaries and world leaders the need for deep and meaningful investment in Africa’s infrastructure, particularly from countries like Russia, China, and India. To date, China has invested $120 billion in Africa, India $80 billion, and Russia $17 billion. Isabel is looking for FDI injections to build transportation infrastructures to bring Africa on par with the rest of the world. Beyond bricks and mortar change, she has been advocating for education and skills development, and gender equality.

Leading by Example: One Candidate at a Time

Her own companies have been instructed to actively promote female candidates through the ranks. By breaking convention, women will no longer be relegated to the roles of homemaker and caregiver. With more women entering the workforce and studying at universities and vocational colleges, plenty of economic opportunities are available. Existing frameworks are slowly changing to accommodate the new cultural zeitgeist of our time.

Isabel routinely states that she has taken it upon herself to be a facilitator of change. She is passionate about the youth and their well-being, their prospects, and their education. Not only does she contribute to a children’s paediatric hospital, a fun day for underprivileged children, scholarship opportunities to international universities, and the eradication of malaria, she is also looking to bring the latest technology to Angola.

One of Isabel’s companies, Efacec is involved in electric vehicle technologies. She is hoping to have charging stations and electric vehicles operational in Angola by 2050. She was instrumental in pushing for high-speed Internet connectivity in the country, and thanks to the undersea fiber-optic network connecting Brazil and Angola that too is a reality. All of the social entrepreneurship initiatives she is advocating for are designed for rural and urban dwellers alike.

In her words, ‘We must tackle malaria head on to ensure that our young people, our rural people, and our future leaders are able to realise their full potential… Clean water initiatives are near and dear to my heart. Impoverished communities must not be ravaged by polluted water. We all have the right to clean water, clean air, and malaria-free lives. These are basic human rights.’

Her inspirational style and hands-on approach to managing people and getting the best out of them is paying dividends. There is much work to be done, but she is the catalyst that is making it happen.

The Ideal Frequency for Posting on Blogs and Social Media