As you’ve no doubt surmised, perhaps randomly or perhaps not, Batman’s a fairly big deal around here. That’s part of the reason I tend to categorize days in three ways: 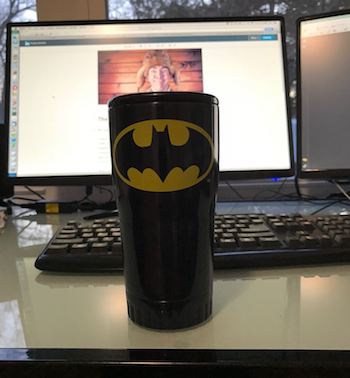 Batman-mug days are those in which nothing less than 16 ounces of Peet’s Major Dickason’s Blend, brewed to a consistency in which you can stand a knife, blade down, and served scalding hot and jet black, will get a minimum number of my synapses firing and elevate my state of mind above negative numbers on the Positivity Scale.

It’s likely evident from my most recent post that I’d been experiencing quite the run of successive Batman-mug days of late. Here’s why: I’m terrible at helpless. I’m incorrigibly driven to make sense of things, even if they make no sense. And my initial and strongest inclination is to fix things. My brain is the perfect manifestation of a man’s brain, according to this:

So, I’d been struggling. And I struggled to determine whether to publish that most recent post from the moment I wrote it. I struggled because (A) what I expressed in that post is absolutely true as I see all things media, but (B) there was no hope in that post. There was no fix or fixing in it.

Moreover, that post made me afraid. I was afraid because:

Then I saw the Condoleeza Rice video in the P.S. of that post.

That video reflects an informed, balanced perspective. It was all and exactly what I needed. Rather than making me feel as if I could fix something, it made me feel fixed. It made me feel as if a lead helmet had been removed from my head. I could lift my head and see clearly again. Whew! That was close.

Time Is All We Have