I know this because I have been told this.

There is no doubt that at the time I didn’t know this.

How could I not know? In my defence, I have many excuses reasons – this is one of them. 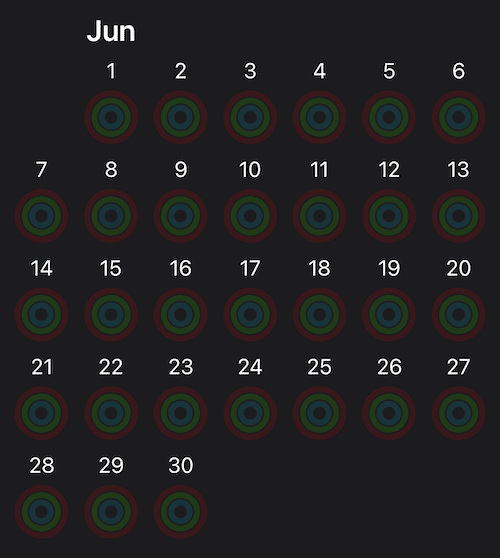 I am not generally big on exercise, but I do move from time to time!. BUT. When I look back at my activity tracker for last year, month after month looks like that. NO MOVEMENT.

It was early in the year that I was diagnosed with cancer. I wrote about it at the time, but I wasn’t ready to share the story with the world in my name. I did though want to share something, so I wrote it and Dennis kindly published it under a different name. Thank you, Dennis.

If you read the article, you will know that at the time of writing I clearly had big plans, opening as I did with these words.

This is the first of an occasional series of articles that describes a journey of a battle with cancer. The articles are anonymous but I hope that the words within them and the snippets of observations that are already appearing on my blog will help someone in their fight – whether they are on a similar journey or know someone on that journey.

A series of articles! Such grand ambitions. Question … does one article make a series? I also repurposed a Twitter account and tied it to a blog I created.

I clearly had no clue what I was in for or where I was heading.

Last year I journaled as much as I had the strength for – with the full intention of publishing something. In the end I have decided against doing that. Cancer as it turns out is not that unusual. Based on data collected between 2015 and 2017 …

… approximately 39.5% of men and women will be diagnosed with cancer at some point during their lifetimes.

In fact, my specific cancer is actually the fastest growing cancer affecting men in the world today. It might all seem so personal as if somehow I was being picked on, but of course, I was not. It is common.

Too common .. after my diagnosis and prior to my recovery two of my friends in the UK were also diagnosed with Cancer. They couldn’t get the care they needed and both died within months. Who am I to write about my experience? It will just be one more story about working through a disease and most of it will be no different from the stories that millions of others throughout the world can tell. Do tell.

My initial way of handling cancer was to ignore it and try to operate as normally as possible. That said, if you watched New Amsterdam – don’t believe it – that’s not how it works. For me, had I really done nothing I would more than likely have not just nearly died last year, but like my two friends – I would have actually died – joining the ranks of millions of people across the world who ‘move on’.

Last year? Well, it was stage 4 when it was discovered. I had one tumor in the neck that was 8.5 centimeters and that wasn’t the growth causing me the problem that took me to the doctor, to begin with. But the doctors felt I had more than a good chance – so we started the journey.

And it is that ‘we’ that I really want to focus on.

I’m a ‘boomer’, ‘male’, and ‘English’. A toxic combination when it comes to looking after my health. It manifests itself as not really ‘doing’ doctors. In fact, the only reason I went to the doctor’s at the start was because my partner insisted.

Once I had gone, left to my own devices, post-diagnosis, I would have heard all the instructions and what I was meant to do – but even at the best of times – I would have had a hard time following the path. Bottom line – ‘my’ journey would not have been possible without someone right at my side.

Someone who came to every appointment. Who woke up every 2 hours to give me medicine – for days, weeks, and months. Who slept on a couch in the same room for a week after every one of my chemo visits. (Did you know that chemo is so powerful that it can be absorbed by another body in close proximity?) Who made sure that I did some kind of exercise every day. (Not walks – just getting up. At all.).Who made sure that I ate even though I couldn’t (my intake was a tube in the stomach). Who created an environment that allowed my mind to stay positive and calm. Who made sure that I stayed alive.

My journey was our journey.

Today, as I have appointments with various doctors, I am told stories about other patients who had the exact same diagnosis walking into their offices two years later with a cane for support, if not in a wheelchair, whispering when they talk. Unless you know my story, you would never guess it. The difference? My partner — Jax.

There is no doubt that untreated cancer will eventually stop you in your tracks. Treated cancer is just the same, but with a potential recovery. The side effects of chemo, radiation, and drugs change who you are.

You know that 2020 was a year of COVID and lockdowns and like many others in the world, Jax and I both saw our income sources grind to a halt. By the time we got to Christmas 2020, we were just starting to pick up the pieces and start again. I had just won a great contract but in no time at all, that doctor visit, the referral to specialists, the diagnosis … no choice … I had to pull out.

Meanwhile, Jax’s work in identifying innovative people and companies that join her in the fight against human trafficking had also been put on hold. After my diagnosis, she asked one of her board members to assume responsibilities for the contracts she had left, because you just can’t be a full-time patient carer and fight Human Trafficking across the globe.

As for those near-death experiences, again – no need for the detail – suffice to say when I collapsed in the bathroom pouring with sweat, she called the ambulance, got me into the hospital, and pretty much spent the next week in hospital with me as daily reports were despatched to the government as to my condition. (It was nothing to do with me – and everything to do with the fact that what I had was highly infectious – and nobody wanted it to be passed on to other patients in the hospital.)

As I write today, I can tell you that on the 24th of December last year I got my first ever full ‘clear’ scan and am hoping that by June I will be declared ‘1 year free’. Free of cancer at least. The side effects continue.

It’s About People – Jeff And Emma