I Loved To Ride My Bicycle

Most of you who know me will have figured out by now that I am in a wheelchair, the result of spinal surgery from an e-coli infection.

It’s not at all likely that I will ever regain the use of my legs without some sort of assistance, and it’s pretty much a foregone conclusion, because of the balance issues involved, that I will not be able to ride a bike again.

And though my surgery has left me alive and functioning on many many levels, that is the thing I will miss the most.

I have been a bike rider all of my life. From the first tricycle as a kid up to the last bike, an Evo cruiser, which we just sold to a lovely girl from Niagara Falls. I have totally lost count of the number of bicycles I have had. 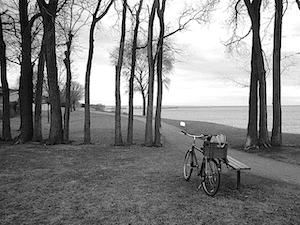 My bicycles got me to and from the golf course where I caddied as a kid, through the long Niagara Falls Review paper route, to school and back, to baseball games all over Fort Erie, to endless rides down the Niagara River Parkway, and to the houses of friends, girl and otherwise, all over town.

The only time I was without a bike was a two-year period after I left Fort Erie to live with my dad in Ottawa. There I had the use of a scooter, thanks to a girlfriend.

Once I got to Toronto, finished high school, and started college, I was back up and riding. And from there it was pretty continuous, through several part-time jobs, a couple of full-time jobs, and then into the advertising business, where, I rode in to work almost every day. I also rode during my lunch hours, because my photography jones started around the same time as I got my first big-time agency job.

Whenever I bought a bike, I always made sure that it had one of those carrier racks on the back. I would attach a plastic milk case to it and be able to lug around all my stuff. I know that it looked kind of weird, especially when I had a fairly expensive bike, but I didn’t really care because camera equipment was bulky back then.

The best thing about the bike was that, for a street photographer, it was like walking around on steroids. You could cover lots of ground and see lots of stuff.

Whenever we went on trips down to Fort Erie, I would bring my bike and ride around the town, thinking about all the shit I used to get into when I was a kid. I was always amazed at just how many street names I could remember and how many houses I could say I had been in.

One weekend we went to Chautauqua, and I rode my bike all around taking pictures while Heather went to lectures and concerts. With some of the images, I shot I actually included my bike figuring it would add a bit of documentary feel to the whole thing.

After the kids left home, I took over the food shopping, and the bike was very handy for that. I could pack two days’ worth of stuff in my little milk case, and my wife, who decides to go back to work, got to strike shopping off her list of things to do.

But the best part of riding a bike was the headspace it put you in. I like to write poetry and lyrics, in addition to all the other stuff I like to write. So as I would ride I would start to hum a little chord progression to myself, then pretty soon, words would fall into place. When I had a whole verse I would stop and write it all down, then start up and sing it to myself until I got a second verse and maybe even a chorus. By the time I got home, I would have a whole song written out. Then I would sit down, transfer it to the computer and revise it into the proper metre. I have done this literally hundreds of times. Some efforts were better than others, but all of it got entered up and at least once a week I go back and pick one to clean up.

But it’s funny because whenever I do this I always imagine myself riding my bike. Which I guess makes it, at least in my current condition, very much a state of mind.

All in all, I have had a bike for pretty much all of my life. I was never big on driving a car. I didn’t get my licence until just before my son was born and I was in my early thirties.

But then again, I never really needed a car. Just a bike, and the freedom of the open bike lane.

Jim Murrayhttps://www.bebee.com/@jim-murray
I have been a writer since the age of 14. I started writing short stories and poetry. From there I graduated to writing lyrics for various bands and composers and feature-length screenplays, two of which have been produced. Early on in my writing career, I discovered advertising. While the other media have drifted in and out, communications writing and art direction have been the constant through a 20-year career senior positions in Canadian and multi-national agencies and a second career, which began in 1989, (Onwords & Upwords Inc), as a strategic and creative resource to direct clients, design companies, marketing consultants and boutique agencies. Early in 2020, I closed Onwords & Upwords and opened MurMarketing which is a freelance strategic development/copywriting/art direction service for businesses working to make a positive difference in the world. I currently write long format blogs in 4 different streams, encompassing, entertainment, marketing, and communications, life in general, and the renewable energy and recycling industries. These are currently published on beBee.com. I have, over the years, created more than 1500 blog posts. I live with my wife Heather in the beautiful Niagara Region of southern Ontario, after migrating from Toronto, where I spent most of my adult life. I am currently recovering from spinal surgery and learning to walk again.