Today May 5, 2020, marks the 75th Anniversary of the liberation of the Netherlands.

James Edward Ward enlisted in the Canadian Army two weeks after the government’s Declaration of War in September of 1939 and remained on active duty until discharged in May of 1945. He later served in the Canadian Reserves army for another 30 more years.

My father always downplayed his contribution to the war effort. He joked when asked what he did during the war. His reply was that he was responsible for the strategic withdrawals (retreats). He once was slightly wounded by an enemy sniper fire. He said it was probably from friendly fire.

During his time in battle, my father and his comrades experienced horrific incoming enemy shelling and actively returned fire. There were enemy shells called Moaning Minnies. The name they had given to a horrible sound designed to invoke terror. After his return to Canada, he nicknamed my sister Teresa, Moaning Mini whenever she would express displeasure at something.

My father had a wonderful sense of humor and often at his own expense. During a parade to celebrate the liberation of Dutch town he was asked if he could ride a motorcycle. Although he had never ridden or driven one before, he said he could. The road in the town also served as a dike and was heavily pitched. As he drove down the middle, the crowds were out celebrating in gratitude to the Canadian liberators. 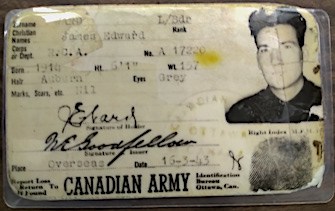 My father said it was most terrified he felt during his time marching across France, Belgium, The Netherlands, and into Germany. He said he was so afraid of falling off the motorcycle. He grasped the handlebars with both hands. The local Dutch villages threw flowers, shouted, and waved in gratitude to their freedom.

In response all my father could do was smile and lift and waved his little finger on both hands!

My father, if he was alive today, would remind me;

The strength of this army ranged from approximately 105,000 to 175,000 Canadian soldiers to anywhere from 200,000 to over 450,000 when including the soldiers from other nations. More than 7,600 Canadians died in the nine-month campaign to liberate the Netherlands, a tremendous sacrifice in the cause of freedom.

Dad, I’m so proud of you, the reluctant and humorous Canadian hero. May God bless all those who served and sacrificed in the liberation of The Netherlands.

Chris Wardhttps://advantage10.com/
Chris is a Global Citizen and brings empathy, passion, service, and vision for nearly 40-years of global IT leadership to the table. Chris recently un-retired in 2019 from Siemens/Atos and launched a new career as a Serial Entrepreneur. His latest ventures are; Founding Partner at Advantage10 which is a global business education company providing service to entrepreneurs and innovators. Advantage10 simplifies business by applying systems thinking to projects and showing how business can be a place of motivation and healing. Chris is co-owner of Viraone.com, makers of a superfood product. He serves as a Board Advisor on two India-based Digital companies. FutureXReady.com MalgusDigital.com. He divides his “un-tirement time between Jamaica and Canada. He Serves as Volunteer Digital Record Department for the National Baha'i Community of Jamaica And Cayman Islands. “The earth is but one country & mankind are its citizens”. - Bahá’u’lláh

The World’s Largest Seashell Collection – We Are Not Our Jobs

Peace On Earth – The Recipe