How Does Rice Cultivation Contribute To Global Methane Emissions? 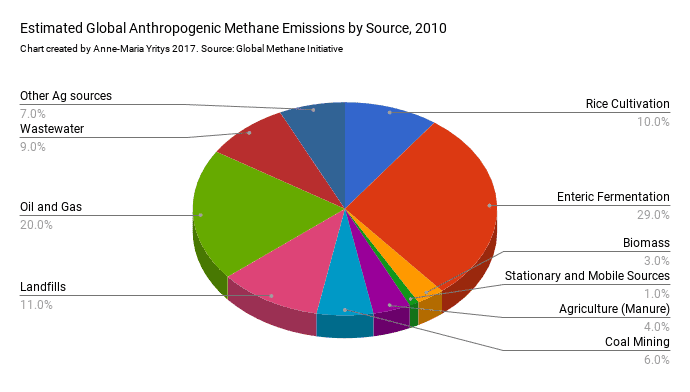 This article is a continuation of my earlier articles on climate change, greenhouse gas emissions and the influence of methane in Earth´s atmosphere.

In brief, methane is a greenhouse gas at least 22 times as powerful as carbon dioxide. It can be found naturally in Earth´s environment: for instance, permafrost in the Arctic region is a significant “storage room” for methane. Due to its powerful qualities as an energy source, methane is a key ingredient in the fossil fuel energy sector, i.e. oil and gas industries. What may be surprising to many is that one of the main emitters of climate amplifier methane is the agriculture and farming sector. In this article, we will take a closer look at rice cultivation, which alone accounts for around 10% (percent) of all methane emissions worldwide.

According to the Rice Association, rice is being cultivated in more than one hundred (100) countries worldwide, with Antarctica being the only continent with no rice cultivation. With the majority of all rice being consumed where cultivated, rice is the main source of food for half of the world population. Today, world population is almost 7,6 billion. Hence, at least 3,8 billion people worldwide currently depend on rice as their main source of food. See the nutritional value here: Fineli – Rice, Boiled Without Salt.

With the many varieties of rice being cultivated in different countries, only a handful of these are being marketed. In Finland, for instance, a consumer can find basmati rice, jasmine rice, full corn rice, dark rice, white rice, various kinds of risotto rice under different labels/producers, porridge rice, and a number of other rice products such as rice cakes. Despite being a widely cultivated crop/grain, at least 90% of all rice grows on the Asian continent.

Some of the major concerns of rice cultivation are the fact that it consumes more than 33% (one third) of all irrigation water worldwide. (KULUTTAJA – Velaksi viljelty basmatiriisi). One grain, one food product, which wastes more water than any other agricultural product. In times of water scarcity, and hundreds of millions of people worldwide with no access to clean water, this is a waste of energy and a waste of our most valuable natural resource: fresh water. If you have ever seen a rice field in nature, or e.g. on TV, you are aware of how a rice field looks like: covered with water, a rice field is not only a huge absorbent of fresh irrigation water but also an optimal environment for methane to thrive. The production of one single kilo rice consumes up to 5.000 liters of water.

IRRI, the International Rice Research Institute, states on its website that the amount of rice lands globally is around 150.000.000 (150 million) hectares, half of which are under continuous irrigation. Furthermore, according to IRRI, within less than a decade at least 10-15% of irrigated rice fields will suffer from water scarcity. IRRI has been working for decades in improving methods and technologies in rice cultivation, through science and research. Despite its high methane emissions and the amount of water needed for cultivation, IRRI estimates that our world needs up to 10.000.000 tons more rice each year to ensure food security for world population. Moreover, vast areas of rice-cultivating lands face risks due to climate change, such as destructive floods. Rice alone is not a sufficient source of nutrition: a large number of rice eaters suffer from malnutrition and micronutrient deficiency. (IRRI Brochure).

Why Your Projects Fail and Suggestions for Improvement