How a Fixed Mindset is Holding You Back

Carol Dweck first coined the term “fixed mindset” back in 2006 through her book “Mindset: The New Psychology of Success”, as part of her decades-long study of implicit theories of intelligence. This form of psychology dives into whether or not the intelligence and abilities of students can change. With all the new focus on mindset and motivational focus in the self-help circles, it’s becoming clearer now more than ever the pains of a fixed mindset – and the benefits of its sister, the growth mindset.

What is a fixed mindset, and why is it ‘bad’?

“Believing that your qualities are carved in stone — the fixed mindset — creates an urgency to prove yourself over and over. If you only have a certain amount of intelligence, a certain personality, and a certain moral character — well, then you’d better prove that you have a healthy dose of them. It simply wouldn’t do to look deficient in these most basic characteristics.”

Those with a fixed mindset tend to hide failures, focus on the outcome only (if it’s not a success, what’s the point?), and think of skills as ‘natural’. If it doesn’t come naturally, they tend to not jump into a task or sport. Not only is this pretty limiting on what you think you can do, but it also leads to pessimism and avoidance. This isn’t inherently ‘bad’, as we all don’t like to do something we have no talent or interest in. But those with a fixed mindset wouldn’t even try.

What’s so good about a growth mindset?

“In this mindset, the hand you’re dealt is just the starting point for development. This growth mindset is based on the belief that your basic qualities are things you can cultivate through your efforts. Although people may differ in every which way — in their initial talents and aptitudes, interests, or temperaments — everyone can change and grow through application and exercise.”

A growth mindset is one that ‘fails forward’ or focuses on ‘failing often and failing early’ – both mottos of agile IT development, for example. Those with a growth mindset know that failure is simply part of the learning process and that it takes time and effort to truly learn something. Tasks, sports, or entire fields of study aren’t immediately out of the question because ‘my brain just doesn’t work like that’ – no, they’re handled with more care than tasks, sports, or fields of study that come easier.

Why should I care?

If you’re “not a language person”, I urge you to think again of how your mindset is holding you back. I’m honestly a little jealous, since Math and Science never came easy for me, though I still learned a fair bit in school. Not knowing how to apply or remember vocabulary words or helpful sentences is a huge detriment when traveling, and could be the way you learned language more than your brain not being wired to pick up languages. I wholeheartedly accept your challenge of not “being a language person” – with a growth mindset and the right application, anyone can become “a language person”! 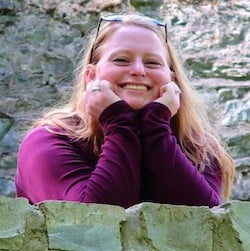