Glad to have you join up with me again for another journey into exploring amazing new perspectives on the world around us!  Remember in our previous travels we connected into an unusual rock formation, and later we met up with Zander, an unusually wise horse?  Today I want you to come along with me as we meet up with a combination of both unusual rock formations and horses.   This was not a journey I had planned – but I often find when I’m connecting to horses and nature in this way, it’s never quite what I expect – and of course, that’s what makes it all so interesting and fun! First, allow me to introduce you to Patrick, a herd member of Zander’s, whom you met in an earlier blog.

It was a sunny day in early October and  I was sitting out on the grass with Zander and Pat, enjoying just hanging out with the horses.  As I sat there, I got the very strong sense that there was something they had to convey and I was to listen.  It seemed important.  I ran over to the barn to fetch pen and paper and then sat back on the grass with the horses. I find that sometimes what they have to say is clear, direct and succinct, other times it is deep and profound and I have to mull it over in my mind to fully grasp the concepts conveyed. On those latter occasions, the information conveyed seems to come from the greater Horse Consciousness; today was one of those…

Horses do much more on this planet than you realize, and it is important for you as a society to begin to see that now.

Horses anchor a line of energy to the Earth; it is like an oversoul that surrounds and guides the Earth in her revolutions and evolution.  She needs to be guided as each of you do, individually and collectively.  The horses communally (and some individually like your more consciously powerful Zander) are the ‘anchor line’ for an energetic oversoul which flows here to the Earth from beyond her physical realm.  A purpose of the horse consciousness in physical embodiment is to be that radiance and that beam which signals and connects to this external energetic force, bringing it to anchor here on and with the Earth.

Those of you who work with horses are called to do so in a way to assist and facilitate their presence and their work here on Earth. Do you see how your connection and care of them allow and facilitates horses to do that spiritual work of anchoring the energetic field of guidance to this planet?  The horses can be here more fully when their daily physical needs are taken care of and ensured.

This is part of the partnership of humans and horses.  Some of you have chosen to care for and relate to horses and in so doing you enable them to do the spiritual work which they were called here to do.

Let the fullness of this knowledge settle into your consciousness too, and you will both be better served.

Later that night, I went to a talk on the crop circles that have been occurring in England for many years.   The man who spoke had studied crop circles for decades and was planning to talk mainly about that.  But then he said he felt the impulse to instead talk about the giant white horses of England, which are these enormous ancient white horse forms cut into chalk on certain mountainsides.  They are estimated to have been created more than 3.000 years ago. 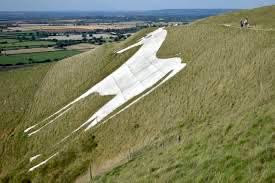 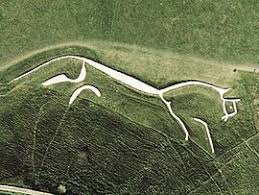 I had never heard of these but was absolutely intrigued! He spoke at length about these creations, but concluded in saying that their purpose has always been a mystery; a mystery which has eluded archeologists, scientists, and other people who have studied them.  He believed, as did others, that there was a spiritual or religious purpose to the chalk horse creations.  He felt there was some higher purpose at work here, but felt unable to further define that, and was always pondering it.

It was then that I put 2 + 2 together and realized why Zander and Patrick had brought me the information from Horse Consciousness earlier that day.     I shared it with this man and he immediately saw the parallel – the giant white horses cut into the rock of the mountainsides was a component of the ‘anchor line’ of cosmic energy to Earth energy.  Now, everything coalesced for us – the information I was pondering, which I’d received from my horses earlier that day, was the other half of the information he had been pondering that evening about these mysterious horse formations in rock.

Synchronicity…as I reflect on that day with you now, it seems to me that so much is about opening ourselves up and allowing. Allowing ourselves to listen to our own inner voice, as well as the subtle expressions of nature and everything around us.  Then things can come into alignment for us.

So here’s an invitation:  Pay attention to that quiet intuition which you have, instead of negating or over-riding it as we all can tend to do.  When you open and allow in that way, what will coalesce for you, what will unfold?  Keep me posted!

In my book Earth Speaks Up, Chapter 21 “The Life Energy within Rock”, provides more insight on rock creations like these made by ancient societies.  Here’s a captivating little excerpt: “know this is an exquisite link of a human dimension with and into a non-human dimension…”

Mary McNerneyhttps://www.marymcnerney.com/
Mary McNerney has learned how to attune to Earth’s voice and vibration, and how to work together co-creatively with Earth and the Angelic Realm. In her book, Earth Speaks Up, and now in her blog, she shows us that this is an innate capability which we all have, humanity has just become separated from it by societal and cultural structures imposed over time. Both the book and her blog provide wisdom, guidance, and tools from Earth and the Angelic Realm to enable us each to re-awaken our skill and ability to listen to Earth and work together with her in a fundamental new way. We are shown we each have the capability to create positive change, for Earth as well as ourselves. Mary leads us in an entirely new direction of connecting with our planet and all of nature, a way we haven’t yet imagined. Mary received her law degree from Georgetown University and had a career in corporate and international law in Boston and Prague until she was unexpectedly propelled into this entirely new direction of working together with the Earth and sharing Earth’s voice through writing and experiential workshops. She is an active member of Lifenet Geomancy, an international organization of people on the leading edge of working together with the Earth on the energetic level, and a founding member of Lifenet Geomancy North America. More info about the author and her book is available at: https://sacredstoriespublishing.com/#!/earthspeaksup