I’m putting together a fun, mindbody roadmap to support women in shifting into confidence (and celebration!) around their femininity and sensuality.

I remember when I was in middle school seeing a woman on TV who had done a TERRIBLE thing! She took it upon herself to conduct a research project where she interviewed hundreds of women about their sensuality, their feelings about sex, what they liked and what they didn’t, their fantasies, etc., The women she interviewed had never really had a chance to open up about this “taboo” subject so some of the research was anonymous and she published it all in a book!

Well… needless to say, she was character assassinated by the media, by the science/medical community, and by the public. In fact, she was so harassed by these institutions and the public that she moved to Germany!

What she did “wrong” was to go against the institutions who had literally “written the book” on what turns women on, what’s-normal-and-what’s-not in sexual behavior, etc.,

I watched this woman trying to defend herself, but she was so demonized that TV shows eventually started interviewing her German boyfriend to “help society understand” her motivations. I remember her saying (when she was still speaking for herself) that she wasn’t going to apologize (because the media kept asking her if she was sorry for what she did and if she had learned her lesson).

So, what did many of us young girls do?

Lie low.  Stay under the radar.  Bury our sensuality and femininity.  Defer to men, patriarchal institutions, and societal constructs to avoid having our reputations smashed, and to avoid being ostracized (or in her case, exiled).

We’re changing that narrative and interestingly; women, men, Mx are often in full support of this.  They’re welcoming it.

So now, in my late 40s, I have many women coming to me and saying, “I experienced all that and understand it was constant coding, but how do I tap back into what was suppressed, what was lost?  Can you help?” 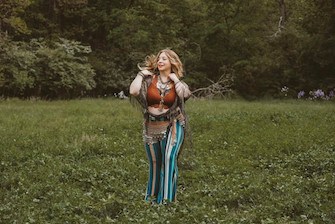 So, I created Bellydance Meditation® to help women experience these aspects of themselves by marrying the transformational gift of our female lineage (Bellydance) to the yogic practices of Chakra alignment, breathwork, and meditation.

I had a moment yesterday as I got ready to post this to my “Story” on Facebook; I noticed these little icons in the corner, calling me to put a sticker or gif around the border. I typed, “women’s liberation,” into the search bar and a Scooby-Doo like animation popped up of a gray tombstone on a little patch of grass, blinking and dancing that read, “Here Lies the Patriarchy.”

I laughed and screeched with delight.  Yes, yes, yes!  On so many levels…YES!!!