Having written about my perceived; or actual wonders of Nature, there is always something that has not been noticed before.

Walking through an ancient building; Winchester Cathedral for example; it matters not how many times one visits this 1000-year-old icon and without actually seeking something previously unseen, suddenly an object or artifact ‘appears’ demanding closer scrutiny. Very special.

What does a 1000-year-old Cathedral got to do with our treasured, natural environment apart from the fantastic floral displays?

When walking around the countryside, every season presents something new; previously unnoticed.  It could be a small waterfall, which during Summer and Autumn, hidden by fauna, with just a gentle sound flowing down into a river,  its water foaming white. There are a small number of such waterfalls that grace the landscape and a pleasure to view for a few minutes.

Perhaps a large plain tree; a few hundred years old giant; a magnet to the enquiring eye during Winter and early Spring‎ where the gigantic trunk presents great crevices, deep into the bark; moss seemingly clinging on as if to keep the tree warm when the climate is cold. On a walk during the third week of March, I strolled past this tree as I have done so many times and was drawn to the majesty of its massive branches, bare of leaves reaching upwards and sideways as if extending a cautious welcome.

There is a gate close by to ensure the tame ‘English Cattle’ do not wander into a particular ‎area alongside the stream. The cattle are actually tame, one can walk up to them and receive a curious glance, stroke their noses but in no way are they frightened by a mere human! The need for space (not galactic outer space) and freedom from the confines of an office; every day being the same; perhaps a monotonous framework of structured routine; escape mode challenges the mind. ‎In a positive manner.

Being released into the countryside blessed with hills, streams, rivers fauna, and flora, birdsong, a splash of trout may be viewed as not really peaceful and quiet.

However overall peace and serenity that Nature offers those willing to be metaphorically carried away by wondrous scenery encompassing joyful sounds of the natural environment. Sounds carry the mind away to another level of consciousness in the realization that there is more to life than a desk and laptop.

Permitting the heart’s release, facilitating emancipation, following the heart,  being caressed by Nature’s empathy for those who acknowledge its glory. A gift to humankind.

‎Pushing aside a cloaked barrier where resistance can be subliminal and in some way trying to protect the individual from the unknown, or perhaps holding back the true identity of life itself.

Life is not a level pathway from birth, but an opportunity to be gathered and enhanced by unknown elements.

Awaking from a dream;  floating into another dream as the senses are transported to a stepping stone, reaching out to the Universe of freedom and inspiration. Stopping for a few moments further releasing the heart to ‎actually feel the enveloping calm and serenity. 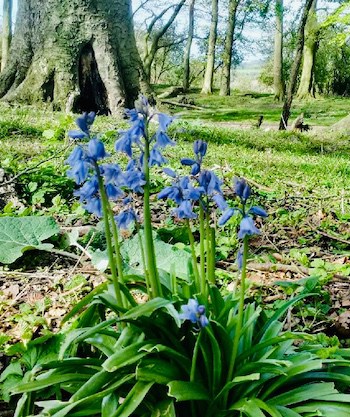 A hill in the distance. St. Catherine’s Hill with a copse of trees atop its mount, calls the mind and heart to float upwards; glancing around witnessing ever-changing views; long grass, and a pathway to the summit itself. Standing at the center, a circle of trees at the same time encapturing the walker and also offering freedom to go beyond the fantasy and be enlivened by reality, envelopes such mastery of Nature’s prowess is seemingly creating an environment especially for humankind.

Creation, beauty, elegance, and awesome togetherness that Mother Nature spreads around landscape after landscape,  lent to humankind; perhaps as a caretaker. Can humankind be trusted with a wonderful creation that blesses us with such dramatic scenery; vistas of awesome magnitude?

When strolling beside an avenue of trees the senses are absorbed, the welcoming sky a greeting, the Universe awaits.

Stopping for a few moments;  or was it an infinity of time, where the natural elements take over thoughts, we stare and gaze at what we may take for granted. Ducks quaking swans majestic, reflections in a river, deep down into the center of the earth. Closing our eyes, magnifying the sounds of beauty, enhancing the senses; elevation to another height, floating freely, floating gently, viewing the meandering river from above; suddenly visualizing a strange phenomenon. Am I really floating high in the sky with a tree’s reflection; witnessing a land below, with greens fields to the left and other senses on the right. Imagination and a touch of fantasy are required to free the heart and mind to absorb this spectacle.

Looking at a river, many do not notice the depth in which reflections exist; almost infinity, because typically reflections do not acknowledge a river base. Walking beside the River Itchen (poet Keats favorite) I am totally absorbed by reflections that deliver a totally different perspective. Yes, a little imagination helps but on releasing an imprisoned mindset, suddenly, realization rests upon us, elevating the heart to a transformed view of reality…..or fantasy.

Describing the absolute joy and indeed respect for what is there for all to witness is a privilege. To spread thoughts, feelings and total empathy with Nature releases a heart that always desires freedom but requires a stimulus for elevation to the Universe of the natural environment.

When freedom of strolling beside river presents such an opportunity, grasp it with alacrity; join me in an imaginary walk that raises the spirits, frees the heart, and envelops the Universe of life itself.

Float high with clouds in the sky;  viewing an imaginary vista that possesses the ability to transform the human spirit to a level of paradise never thought possible.

A‎ view from above,‎ as if floating in an imaginary hot air balloon, glancing through misty branches, in reality, a river-tree reflection, in fantasy a spectacle released by a free heart, caressed by Nature’s beauty.