Hearing With Your Heart

A young person in our extended family was born with severe hearing loss.  Today, after cochlear implant surgery, we can all communicate normally.  But along the way, many in the family – aunts, uncles, grandparents, and cousins – learned a little or a lot of sign language as the implant only became an option after too many years of very quiet living.  To this day, the parents often sign with their now adult child; sometimes as a supplement to speaking, sometimes quietly.

This was brought back to mind by Andrea Clough sharing a picture (below) of the signing alphabet, taken on a playground where the letters and hand positions were depicted on a sign (duh, give me another word – placard?). 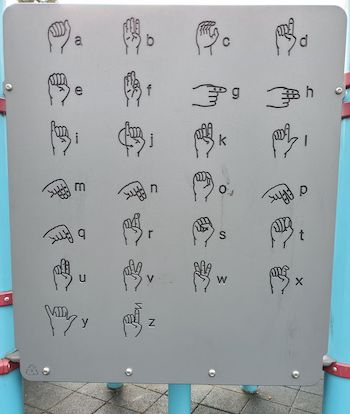 Because we have lived in the US most of this young relative’s life and only met infrequently over the last 25 years, we never became fluent at signing; neither the “spelling words out” that the signing alphabet allows for, nor using the signs that are as fast as talking.  But as with so many types of obstacles people can experience in life: when it is relevant for a person you care about, awareness increases manifold.  So does gratitude when accommodations are in place that can make more people feel welcome, regardless of whether “our” special person benefits from this specific accommodation or not.

Others in our family – not just the parents – became much better at signing than we did.  And although every country has small differences to their official sign language, a lot of the basic words are signed the same way regardless of country.

How is that for you, a language that truly spans the world…

Thus, some in our close family, who had put in the effort to learn some signing, were rewarded when they some years back traveled from the cold, dark, and dreary Danish winter to Thailand on a vacation.

As is common in places of many tourists, vendors will sell stuff on the beach, and among the people harking their wares was a young deaf boy.  Realizing that his setback was due to hearing loss and not stupidity (as is all too often the assumption when people can’t communicate at the level we desire,) they engaged their sign language capabilities, and within a couple of days, they had been “adopted” by the boy’s family.  Although they had no spoken words in common, they could communicate by signing.  Wherever our family members went on the island, their reputation now preceded them.  They were greeted as dear friends of the house and, half the time, they were not allowed to pay for their meals – or got a very different price than what tourists normally had to pay.  (Thank you, Andrea, for calling this story back into memory.)

You can learn a lot of signing by watching Youtube videos.  You may already use some signing because we mute ourselves on Zoom, but that is not the official sign language.  And many of our hand signals translate to obscenities abroad.

It has become increasingly normal that parents learn some basic signs to share with their newborns.  “Hungry” and “wet diaper” sounds the same if you can only communicate with a wail.  We are not talking about the real sign language – that requires a dexterity not yet available to infants – but even babies easily learn to put their hand to their throat if they are thirsty and to their tummy if they are hungry.  They can do that long before they can talk, and with the ability to communicate some needs to their caregiver comes a feeling of control -> less frustrated babies.

Like with the deaf community who can’t communicate as we hearing people prefer, grownups often believe that little children don’t understand much, but they are much smarter than we give them credit for.  Just because they can’t hold their end of a conversation doesn’t mean they are not listening.  And the primary reason they don’t talk back at you much sooner is that the nerves that go to controlling the finer movements of tongue and lips need to grow out first.  That is the same reason they don’t have fine motor skills in their fingers yet.  So do talk to babies to your heart’s content, and not all has to be in the singsong voice or simplified language we associate with small children.

For some children, not hearing the differences between some letters, typically m and n, b and p, d and t, can result in dyslexia diagnoses.  If you can’t hear the difference between words, it is hard to understand why they are spelled so differently.  If a child has had multiple ear infections, this is a good place to check before assuming there is something else wrong if they are slow learning to read.  Focused training on hearing can sometimes solve the problem.

The other version of communication impairment comes to most of us sooner or later.  And most of us don’t realize it because it happens gradually.

We make up for much by lip reading.  If you don’t think you can lip read, try bringing as set of binoculars next time you go to the theater and realize how much better you hear when you can see the lips moving.  Your brain synthesizes what comes in from the different senses and turn that into the most likely sound picture, and that is what you hear.

Be aware that what you hear is not necessarily what another person said.  You have probably seen the birthday card with the text “It sure is windy today.” “Wednesday? no it is Thursday.” ”I am thirsty, too, let’s go have a beer.”  Or heard the joke of the man testing his wife’s hearing and end getting an exasperated “YES – for the third time!!!”  Research tells us that general hearing loss hits men sooner than women, but women may lose the capacity of hearing “tone of voice” sooner than men.  Others’ tone and our own.  Ouch. Another good reason to remember to pause before talking – or we might sound exasperated.

Hearing loss is one of the normal causes for elderly people to feeling left out (Why did they tell my spouse but not me?); for paranoia (I am never told anything!); for social distancing (they don’t like me – when I unwittingly ignore them/ answer to B when questioned A/ don’t remember what I didn’t hear/ get defensive when challenged of any of these points.)  Not hearing – and consequently not engaging with others – is a common cause of cognitive decline. Our resistance to learning that we can’t hear is partly because our culture doesn’t value getting old, partly because many have grown up with more sympathy for people with vision loss than with hearing loss.  A turned-up TV intrudes on other people in ways that large print doesn’t.

By the time my mother finally got hearing aids at 91, she had 30-40% of her hearing capacity left.  From one day to the next, she realized that her sadness over the depletion of songbirds was partly unfounded; they were still around to those who could hear.  She can turn up the TV for her ears only and doesn’t disturb neighbors.  For years now, we have communicated by video call on her iPad; when she can see my lips moving, she hears me across 5,500 miles and 9 time zones.

I am very proud of her; she rigorously puts in her hearing aids in the morning.  Too many people can’t get used to their hearing aids and consequently don’t use them unless they have company.  The brain never gets used to hearing aids if they are only used sporadically and, meanwhile, the person sits in quietude and withers.

I am thankful that I have learned this much about hearing because hearing loss is a genetic risk factor among Danes. (Thus strongly motivated, half the world’s hearing aids come out of Danish companies.)  Getting old is a genetic risk factor for all of us, so I hope you will listen, too, and make a little more room for people that are hard to communicate with.  One day – perhaps that was yesterday? – we will be among them.