We use those words to describe some of the most horrific events in our history.  The Holocaust. More recently, the terrorist attack on September 11, 2001. Here we are… another trip around the sun and another day to commemorate. Those of us who were here, remember exactly where we were when it happened.

I was just beginning what would be my last year as a teacher in a small elementary school in the suburbs in Akron, Ohio. On that particular morning, I didn’t have students, and I was working on a video for our Open House assembly. In the little editing corner of my classroom, I had a small black and white TV which I used as a playback monitor. I never turned the television on, but for some reason, on that day it was on in the background as I worked. Stunned, I watched the footage of the breaking news.

Panicked parents, having learned the news, rushed to the school to take their children home and in some way keep them safe. For the next few days, as people struggled to make sense of what had happened, the images were everywhere. I remember my sister sobbing with anguish in not knowing how to explain this horrible thing to my nephew, Clay.

At home, she tried to keep the television on cartoon channels – anything but the horrible images. But it was impossible to shield him from the news. She desperately searched for words that would make sense to a 6-year-old, even when grown-ups couldn’t find words that made sense.

I remember sitting down at my computer with this flood of images wondering how I would make sense of them. And, like others I assume, I found comfort in demonstrations of human kindness, people helping people, and remarkable courage. I remember thinking that the footage of the planes crashing into the buildings would forever be part of our historical archive. Clay would see it along with the rest of us for years to come. But I wanted him to know how we got through it…. how we survived it…. how we came together as human beings. 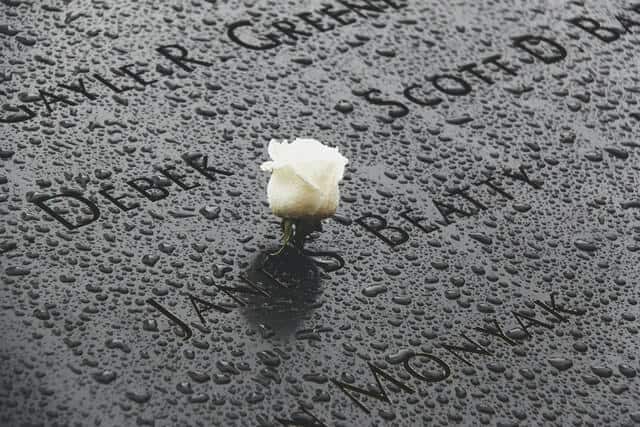 I wanted him to know that out of this inconceivable horror came goodness. Firefighters and police officers who were so incredibly selfless and brave, people of all colors, religions, and political affiliations coming together in a way I had never seen before in my lifetime. Sixteen days after the event that would forever change our nation, I again sat down at my computer to create another video – one that I could give to Clay when he was old enough to understand the evil and the hate… and the bravery and the compassion.

Buried in a box along with the front page of the Akron Beacon Journal dated Sept 16, 2001, and a few magazines that focused on the heroes, I found that DVD that I made 19 years ago. Today, Clay is 25 years old. Because he’s never known a world without mass shootings and terror threats, I wonder if he will ever grasp the magnitude of that event…how inconceivable it was. And given the polarizing state of our country today, I wonder if he’ll ever experience the only comfort we could find back then – the resolve to come together as a nation and be better human beings.

Are we stronger? Are we better? Are we good people – kind, compassionate, and inclusive despite race, religion, or sexual orientation?

I listen to hateful speech and watch violent demonstrations under the guise of protecting rights and freedoms. I see racist, insulting, ignorant images and name-calling as I scroll through social media. I read stories and struggle to comprehend the statistics of senseless murders, of racism and bigotry and social injustice. I read stories about people who have lost jobs and loved ones due to the pandemic and those who are struggling to feed their families and pay the bills.  I listen to people argue about who to believe and what to believe. And I think about what we are doing to each other and our planet.

Are we good to each other? Kind? Compassionate? Inclusive?

Have we forgotten? Maybe this year in that moment of silence we share to memorialize the lives lost on that horrific day, we might also find the resolve to show our children what this country once was… and what it CAN be again.

If each of us commits to being better in our own small sphere of influence, that would be a great start.

This is the video that I created for Clay 18 years ago.