St. George’s Day Tuesday, April 23rd, 2019 is the day for all Englishmen and women to remember and celebrate the Patron Saint of England … St George.

I am going to predict the usual lackluster turn out on the day in England. There will have been some celebrations, a few street parties, and parades, events at London locations like Trafalgar Square and Vauxhall Gardens, Morris dancing in Leadenhall Market but on the whole, the day will pass by and definitely celebrated with less vigor than the celebrate the Patrons of Ireland, Scotland, and Wales.

I am not suggesting that the English would seek to compete with the Global St Patrick’s Day[1]. But we can definitely do better. The Irish understand what it is to be Irish. Wales turns out in force on the day of St. David. Since 2002, the Scots have flown the flag of St Andrew’s on St. Andrew’s day above all Scottish Government buildings. The Scots passion for their country is palpable. For example, while the flag of Scotland was officially defined by the Scottish Parliament in 2003, the flag of England still does not figure in any official legislation. Of course, this probably comes down to the fact that there is no English Government.

Meanwhile, In America, we have people self-identifying as Irish-Americans, Scottish-Americans, Scotch-Irish Americans, Welsh-Americans … but English-Americans? The term is officially recognized and occasionally referred to as Anglo-American … though that term, despite its specific origins of English seems to be used interchangeably with British-American[2].

It is clear that for centuries, even in England, that the idea of England, Great Britain, and the UK are often conflated and the confusion remains. This probably explains why you see questions on the internet asking; ‘Why does Great Britain have two flags?’ If you want to understand how all this came to be … CGP Grey has a wonderful video.

So if we English don’t really understand it, or at best ignore it, there is no surprise that a void was created and into that void came thugs, anarchists, nationalists, the far-right, The BNP and The English Defence League (don’t let that name confuse you) to name a few.

I have previously written that a significant cause of the ‘English Brexit vote’ stems from those days when it became clear to the English that The British Government was essentially going to treat them as second class citizens, remove their representation and focus on other nations.

It has then grown through other movements in the United Kingdom like Irish and Scottish independence and since Brexit, seems to have taken on a life of its own. But to celebrate St Andrew, declare yourself Scottish and celebrate your heritage does not make you a Nationalist. So why if I declare myself English, am proud of my country and fly the George Cross am I a bad person? Why should I be made to feel ashamed?

Robin Rendle, a fellow ‘Englishman abroad’ published this a couple of days ago …

After Brexit, the English flag is to the United Kingdom what the Confederate flag is to America.

The next day I’m walking around London and I spot the English flag in a shop window and I clench my fist and try to hold back tears.

The English flag is an embarrassment to us all.

Well – it isn’t to me! How dare he. By all means, he can speak for himself, but not for us ‘all’. To be clear, Wales also voted to leave. London is in England but did not vote to leave. Robin needs to be more careful with his sweeping generalizations.

But this immigration stuff is hardly new. Consider these words;

England has become the habitation of outsiders and the dominion of foreigners. Today, no Englishman is earl, bishop, or abbott, and newcomers gnaw away at the riches and very innards of England; nor is there any hope for an end of this misery.

We have moved beyond those times. England rose up and overcame whatever it was that William had identified. (Remember his life on earth started just 30 years after the Norman Conquests.)

For me, I understand why we should stay in Europe. It would be for the best. I think we can still remain. But it requires our government to do something. Something that I am not seeing.

This is not the fault of England or the English. It is a failure of Government, leadership, policy, and rejection of the people of England by those in power for decades.

What we need to see is leadership, decisiveness, honesty, transparency and most importantly the English people taking back its power that the British Government has squandered.

It is not in the best interests of England, or the UK, to leave the EU … but a decision one way or the other … now .. whichever way it falls … would be better than what we have. If we leave. So be it. If the United Kingdom dissolves so be it. I’m not saying that is what we want, or that it would be good. But I for one have faith in the English.

With this mess of a political shit-storm, we call Brexit hurtling towards the country, as I feel Northern Ireland slipping away from the United Kingdom. Likewise Scotland. We, the English have a choice. Do something about it. Pull ourselves up and become one again – a country to be proud of. Or give up. Hand it over to the racists, thugs and small minded. If you are a true person of England, I think I know where you stand….

I see you stand like greyhounds in the slips,

Straining upon the start. The game’s afoot:

Afterword: A Sporting Insight to the changing nature of Pride in England.

In 1966, when England won the world cup, the stadium was full of Union Jacks (and the occasional ‘Tricolour of Deutschland’). You would be hard pressed to find the ‘Cross of George’. 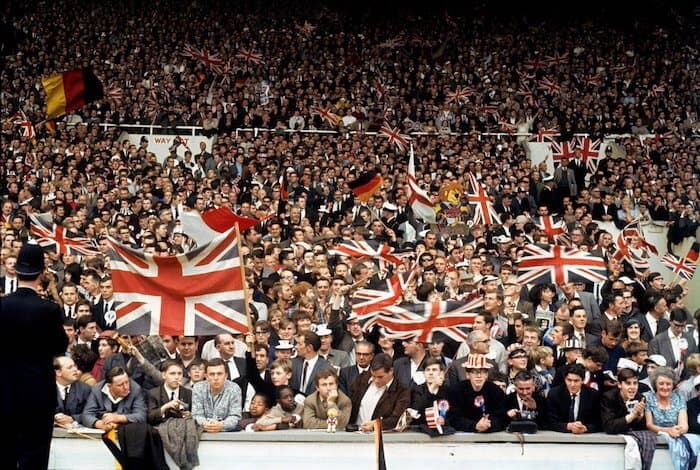 Fast forward to 2012 – still Wembley, same event (although a very different stadium), and it was quite the opposite. 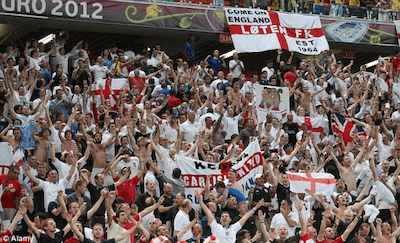 See what happened there?

[1] Whilst the epic scale of the days is mainly due to Irish-Americans, the Irish have always respected their Patron Saint.

[2]  Well over half the founding fathers were of English stock. Early settlers were overwhelmingly English. Arguably bit by bit America became to be seen and maybe even felt as an extension of England … so the Irish, Scots, Welsh carved out their own space – lest there be confusion. Proud indeed of their history, origins, and heritage. The English? They just assumed they were in New England. To all intents and purposes, they were.

John Philpinhttps://www.people-first.net/
JOHN'S career spans 30 years, 2 continents, and organizations as diverse as Oracle, Citibank and GE. A Mathematics graduate, John moved to California in 1990. He helps technology companies create, develop and deliver their story for fund raising, market development and influencer programs. He also works with businesses to ensure they understand, and are ready, for the ever accelerating changes that technology is bringing to their industry. John is a co-founder of Expert Alumni and gleXnet and long before futurists and industry watchers were writing about the impending challenges that industries were going to be facing, they predicted a perfect storm of issues like skills gap, declining work forces, the gig economy, people trained to do work no longer needed, demographic shifts, economic and social change, market upheaval and rapidly changing ways of doing work. From the beginning they have promoted the idea that massive change was coming to how organizations should think about their workforce, with a singular focus on simplifying the interface between people and their work. Understanding the challenges ahead of the curve, the solution was built to arrive at a better understanding of the greatest restraint to business operations - competence, not capital. gleXnet provides unparalleled insights into an organizations people and operations by flipping the problem from the perspective of people, not the business.