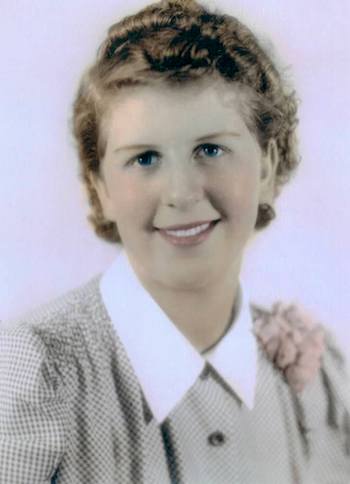 slipped the name Hughella when he registered her birth. My grandmother was upset and never forgave him for the name change and only called her Audrey.

Her ancestry in North America dates back to 1620 around the same time as Mayflower and fought in the Revolutionary War for the rebel army including the famous battle of Bunker Hill. And as family folklore goes her ancestors migrated to the Ottawa area of Canada after claiming to be “fake empire loyalists” Anyone who fought on behalf of the King was given free land in Canada.  http://www.biographi.ca/en/bio/wright_philemon_7E.html

My mother, like many women during the war, served her country in armament factories producing cannon shells at Mueller Brass in Sarnia Ontario. It is interesting to note during the war and before she married my father was in the Royal Canadian Artillery and likely fired these same shells. In addition to working at the plant, she was also a union leader. Working in union leadership is something she passed to her daughter and granddaughter.

Audrey (not Hughella) Anderson married my father James Edward Ward in June 1947. They met at the same factory she worked in, my father worked the night shift after his return, and my mother the day shift.

My mother’s greatest achievement was not her “Rosie The Riveter” wartime work in the factory but her peacetime contribution of giving birth to nine children.

Many experts say that the postwar baby boomer era started in 1947 and peaked in 1963. The actual day and the month have not been revealed until now. It began on June 5th 1947 on my parents’ honeymoon. Nine-month later the Canadian baby boomer generation was officially underway with her firstborn son.

My mother gave birth to 8 more children during the baby boomer days ahead. In fact, I calculated that she was pregnant 7 out of the first 10 years of marriage. I was the 8th born in April 1957.  I once asked my mother if any of us were surprise babies, aka mistakes. She said the last 5. My father said he would have more if he had his way.

And for those of you who are wondering when was the day the postwar baby boomer generation ended.  It was June 25th, 1963 when the last of her babies were born. All of the other eight believe it was her biggest surprise of all.

My mother’s postwar peacetime effort remains her greatest legacy, it survives through her children, her grandchildren, and great-grandchildren and those to follow.

The doctor who assisted at our birth once said to my mother, “Audrey there will be a special place in heaven for you. I believe it to be true.

On this mother’s day, 32 years later since the last mother’s day, she was with us. I would like to award her posthumously the distinguished service award for starting and ending the baby boomer generation and for her tireless service to all of us.  And on behalf of her nine children with much love, admiration, and gratitude that I award you Audrey Anderson Ward the distinguished Greatest Generation Motherhood Service Award.

And during this heavenly ceremony, my mother would say, I accept this award on behalf of all the “Greatest Generation” mothers.

Happy Mothers Day to all the next ‘Greatest Generation” of mothers. All those working on the peacetime Covid-19 frontlines, both in homes, hospitals, and wherever you are serving. Thank you for your role loving,  protecting, healing, and comforting us.

Chris Wardhttps://advantage10.com/
Chris is a Global Citizen and brings empathy, passion, service, and vision for nearly 40-years of global IT leadership to the table. Chris recently un-retired in 2019 from Siemens/Atos and launched a new career as a Serial Entrepreneur. His latest ventures are; Founding Partner at Advantage10 which is a global business education company providing service to entrepreneurs and innovators. Advantage10 simplifies business by applying systems thinking to projects and showing how business can be a place of motivation and healing. Chris is co-owner of Viraone.com, makers of a superfood product. He serves as a Board Advisor on two India-based Digital companies. FutureXReady.com MalgusDigital.com. He divides his “un-tirement time between Jamaica and Canada. He Serves as Volunteer Digital Record Department for the National Baha'i Community of Jamaica And Cayman Islands. “The earth is but one country & mankind are its citizens”. - Bahá’u’lláh

Universal Rule – You Can’t Beat Up Your Father*