Whether we were blessed to know them or not, we all have four grandparents. I was one of the lucky ones who was able to meet all of mine. I’ve even had the opportunity to meet four of my great-grandparents. I read a few pieces on BIZCATALYST 360° about mothers and family. And it gave me the idea of digging a little deeper into my own family. We all have stories. But once we pass, our stories only live on in the ones we loved and the ones who loved us. I felt an urge to write about my grandparents. I wanted to tell their stories I wanted to commemorate them. I wanted to put their stories in words in the hope my children would read about them one day.

I started this journey memorializing my Grandma Nori, my father’s mother. And now I’ll move onto my mother’s mother, Grandma Jean. To learn more about her life, I interviewed a few family members and did some research on Ancestry.com. I also had my own memories to bring to the table. And one of my favorite memories of her was her morning routine.

She retired to Florida before I was born but would come visit New Jersey for a couple weeks each summer. I loved waking up in the morning and running into her room. She always did a handful of stretching exercises when she woke up to get herself started for the day. For stretching her legs, she had a piece of at-home gym equipment she brought in her large suitcase. She’d even let me take a turn when she was done. 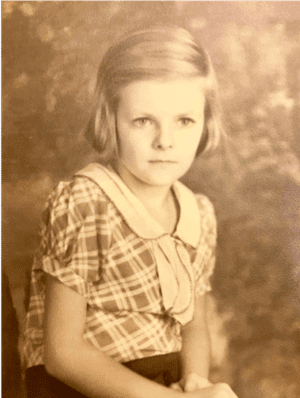 After her 15-minute warm up, she’d head out in the kitchen to make toast. She’d pop two pieces of bread into the toaster. She’d fold her napkin in the perfect shape to accommodate both slices of bread. And when the toast came out, she’d evenly spread her lactose-free margarine across the top of each slice. I’d follow her exact steps to enjoy an identical breakfast. She didn’t say much those mornings. She didn’t have to. But her morning routine always brought me peace. It was predictable. It was sensible. It was one of the simple things that made her life so enjoyable.

Jean Doris Ferguson was born on November 25, 1925, at St. Vincent’s Hospital in Montclair, NJ to Georgianna and John Ferguson. She was the little sister to two-year old Gloria and was soon followed by her two younger sisters, Margie and Nancy. Though her early life was during the great depression, she was very-well insulated from the economic crisis since her father was part of the Telephone Pioneers of America. His career path provided his family with a steady income adequate enough to purchase new homes and new cars. 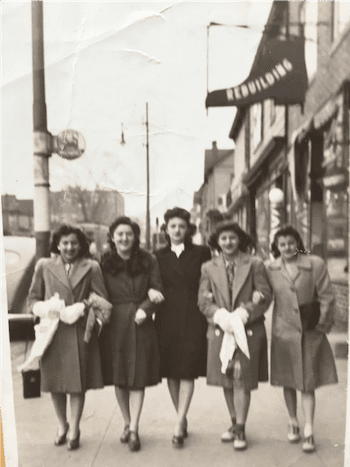 Jean was very close with her sisters when they were young. They enjoyed a wonderful bond growing up together in suburban New Jersey. When she was 16 years-old, her father approached her with a proposition she couldn’t refuse. If she wanted to drop out of high school, he would allow her to — as long as she went into New York City with him each day and learned how to be a telephone operator. He knew that his career path in emerging technology was valuable and wanted to set her up to succeed.

Because World War II was in full swing, women were common in the workforce, and I imagine John wanted his daughters to be able to have a flourishing career – if that was what they wanted. So, Jean Ferguson, at 16 years of age, dropped out of high school and took the train to New York City with her father every day. Here’s a photo of her and her girlfriends on a lunchbreak sometime in the 1940s, Grandma Jean is on the far right:

The Ferguson family loved to go out to eat. John, Georgianna, and the girls frequented a spot in Bloomfield, New Jersey, called Ganzer’s Tavern. It was a town staple that supplied food and drink to folks since 1893, despite having changed names and owners several times during its existence. One night, a young man came up to Jean’s father and introduced himself. He said he’d seen the family there a few nights and he wondered if he could take Jean on a date. After chatting a bit, John Ferguson agreed. And as they say, the rest is herstory. 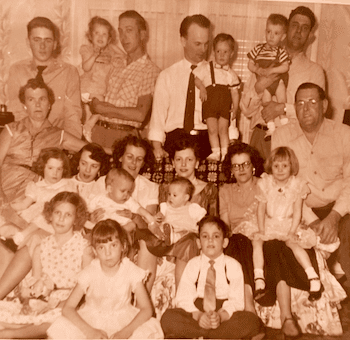 John DePasqual and Jean Ferguson were married in 1946. Jean gave life to their four children: Edwin, Nancy, Leonard, and Diane. When the children were younger, they fondly spent the holidays with the extended family. In this photo you’ll see Jean sitting in the middle row on the right with her daughter Nancy on her lap. Her father, John Ferguson, always had an elaborate Christmas display. And her son, Ed, fondly remembers the train that circled around the Christmas tree surrounded by a village with a white picket fence, cars, and houses.

She didn’t work while her children were small, but as soon as her youngest was in school, she jumped right back into the workforce. She picked up were she left off, as a switchboard operator for Lummus Technology in Bloomfield. She fondly told stories of their international clients. She got a kick out of hearing people speaking in foreign languages. And she loved having money of her own once more. ean had great character. She was a hard worker, and she had good morals. She prided herself on teaching her children these values. While they wouldn’t describe her as warmly maternal in nature, they would admit she was their protector. They wouldn’t describe her has a good cook, either. But she certainly cared for them in her own way. And she fiercely defended them whenever the need arose. As her children grew older, Jean became a grandmother to eight boys and girls. When the children were born, she’d give each of them a nickname. This was one of her ways of showing affection. While some of her grandchildren had a cute name like Pink Rosebud, she chose to give me the nickname, Porkchop. When I was born, I was on the heavy side and apparently resembled a pork chop. I’m thankful that when I grew up, she opted to change my nickname to Jellybean.

Another one of Jean’s charming qualities was her simplicity. She didn’t want to live a complex life. She was a simple woman, and she was happy doing whatever she was doing. She was in a weekly bowling league. She enjoyed doing crossword puzzles. And she loved to go out to dinner for some Prime Rib.

When her mother grew older and needed to be cared for, Jean took Georgianna into her home. She was a natural when it came to caretaking, and she always made space for the ones she loved. When her husband retired in the ‘70s, they decided to move down to Florida and brought her mother with them. They started off living in a three-bedroom house in Pompano Beach. But after her mother and husband passed away, she moved into a condo complex in nearby Lighthouse Point. Most of my memories of her are from the time she lived there. She kept her simple-life mentality there. She continued to join bowling leagues. She continued to do crossword puzzles. And she was able to add pool exercise classes into her routine, since they were offered in her condo complex.

Jean passed away on November 26, 2004 – one day after her 79th birthday – from pancreatic cancer. Though she quit smoking when she turned 60, years of smoking unfiltered Camels caught up to her.

Grandma Jean’s favorite animal was a bunny. I have a few of her bunny trinkets proudly displayed in my home. Each spring when I see real bunnies hopping in my yard, I fondly remember her. She was my protector in many ways. And I loved watching her enjoy life in all its simplicity. I’ve even subconsciously passed down her practice of assigning nicknames to my children. I hope I’ll continue to do that if I’m lucky enough to be a grandma one day.

JoAnna Bennetthttps://obriencg.com/blog/
Mother, Marketer, Writer, and Reader. I’m a mother of two wonderful little humans. I’m also an avid reader, an insatiable learner, and a self-acknowledged survivor. I’m grateful to work at O’Brien Communications Group (OCG) because I’ve learned the self-soothing and restorative craft of writing. I used to resist calling myself a writer because I have a finance degree. I naively thought I needed an English degree to effectively express myself in writing. But now, writer is a title I proudly wear, and writing is something I’ll practice for the rest of my life.