Geometric Shape as a Metaphor for My Life

Geometry is all around us, and we are surrounded by myriads of geometric forms, shapes, and patterns. Every living organism and all non-living things have an element of geometry within.

The above quote is from my article Geometry, All Around Us, which I wrote almost five years ago. I have read it again after the Editor of Reflections, the journal of the Mathematics Association of NSW in Australia, contacted me recently with the request for republishing my article in the mentioned journal. I was thrilled and honoured.

I use mathematics and geometry my whole life. For me, geometry is such a fascinating subject. It has been one of my favourite subjects during my school years. Geometry has shaped the world around us, from human DNA to crystals. While re-reading the article, one thought came to my mind:

What geometric shape could be a metaphor for my life?

I wasn’t thinking of complex geometric objects but basic geometric shapes to depict a complex biological system such as life.

I first thought of a straight line which is a set of points between two milestones of our life – birth and death. It makes sense actually if we see life as a continuous journey. The path of life is anything but a straight line with its ups and downs, potholes and gorges, but putting into a larger timescale, it is straight. As a side note, when put into a broader perspective, human life is an infinitesimal dot.

Still, a circular shape best represents life. A circle might be a perfect metaphor for life. The ancient Greeks considered the circle superior to all geometric shapes and a symbol of balance in nature. It is a perfect shape where every point on its rib stands at an equal distance from the centre. As someone stated, a circle is the most ‘democratic’ geometrical shape.

Life is a continuous process of change. The symbolic metaphor of that process is a circle that grows by the power of life itself.

I can visualise myself inside my metaphorical circle pushing the boundaries of the circle outward.

As we learn new things, embrace new knowledge and ideas, stay curious about the world around us, our metaphorical circles expand, their radius and area increase. Once people stopped growing and learning, they begin to stagnate within the existing boundaries, and eventually, their circles even start to shrink.

To quote Gandhi, “We should learn as if we were to live forever.” Knowledge is considered the greatest treasure one can possess. I see it as the power that makes the boundaries of my circle expand.

We all are learning and growing at our own pace. Some people never stop expanding their circles. Some choose to exist within their closed limits. No matter the size of our metaphorical circles, they are all moving through time. When I wrote this, I instantly envisioned a circle rolling along the straight line and a cycloid curve.

A cycloid is such an elegant curve, traced by a point on the rim of a circle as the circle rolls along a straight line. I have been amazed at its beautiful geometric and mechanical properties since I first heard of the curve. It inspired generations of great mathematicians. Galileo gave the curve name ‘cycloid,’ from a Greek word meaning shaped like a circle. 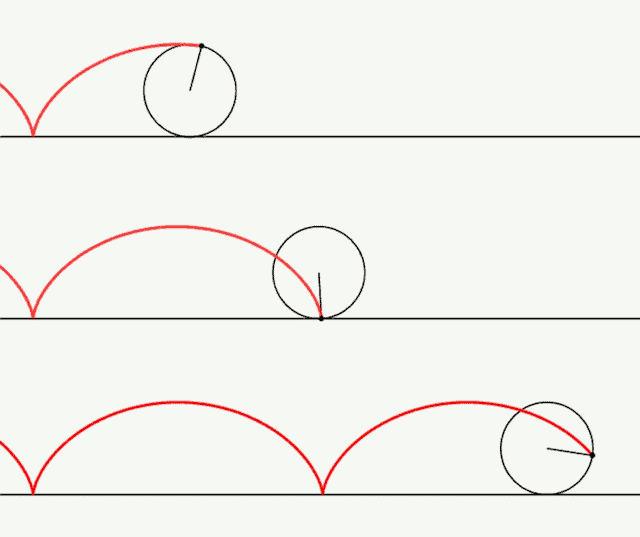 The curve is periodic, which means it repeats the identical pattern for each cycle. The length of the straight line for each cycle is equal to 2rπ (circle circumference).

The Brachistochrone problem, or the problem of the fastest descent curve, is one of the oldest problems in the history of calculating variations. As seen in the short video below, the shortest path and shortest time are not always the same thing. An object subjected only to gravity (without friction) will slide between two points in the least possible time along a curve, not a straight line. The curve that represents the path of fastest descent is the half-arch of an inverted cycloid.

Another amazing property of a cycloid is the tautochrone (isochronous) property, meaning the same time or equal time (in Greek). The time for an object (subjected only to the force of gravity and without friction) to slide down the inverted cycloid does not depend on its initial position. It will reach the lowest point of the curve in the same amount of time regardless of the point from which it starts (clearly explained in the video below). The cycloid is the only curve that possesses both brachistochrone and isochronous properties.

There is more about this amazing curve!

If a pendulum is suspended at the point between the two adjacent arcs of the inverted cycloid, and the length of a pendulum is equal to half the arc length of the cycloid, the pendulum bob will swing in the shape of the same cycloid as its shifted copy.

The video below shows five pendula with the same length and different amplitude swinging in a cycloidal trajectory under the influence of gravity. Due to the isochronous property of cycloid, all five pendula cycle through one complete oscillation (back and forth motion of a bob) in the same amount of time whatever the amplitude – meaning no matter how far from the central equilibrium position each bob is to start. All five pendulum bobs reach the lowest point of the curve (equilibrium) at the same time!

The pendulum-regulated clock was an application of that isochronous motion.

I could go further and talk about spirals, shapes most often found in nature and the universe, but I would like to stop here. Talking further about oscillations and isochronism will lead us even to the concept of quantum entanglement. Let just say that the universe is an interconnected oscillating space, and the cycloidal pendulum connects curve, time, and oscillation.

Those of you who still read this article (and did not get tired of curves and Greek names) may be wondering what a cycloid has to do with a metaphor for life.

Well, in my opinion, a cycloid and cycloidal pendulum, with its amazing geometric and mechanical properties, could be the perfect metaphor for my life.

A cycloid is a reminder that life is cyclical.

A cycloid is a reminder that the shortest path is not always the fastest.

A pendulum is a metaphor for life swinging back and forth between extremes as it goes through equilibrium. It is also a reminder that swinging is an act of balancing our life. Those five isochronous cycloidal pendula symbolize nature and life as a whole and agreement between the parts of a whole united by a mutual relation of motion.

I use geometry to shape and build engineering structures. Geometry as a metaphor shapes the way I understand the world around me. To quote the renowned American physicist Richard P. Feynman,

If you want to learn about nature, to appreciate nature, it is necessary to understand the language that she speaks in.

And the language nature speaks is geometry.

What about you? Do you understand this language? What geometric shape could be the perfect metaphor for your life? 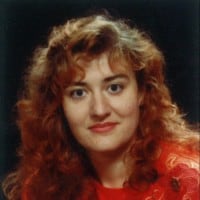 Is There Beauty In Verbosity?

If Aristotle Were Alive, What He Would Say About Virtual Friendships?