From Submerged to Emerged: A Past Life, Godzilla’s Hand, and a Soul Calling

I’ve known for a long time that I would be stepping out onto a bigger stage. My first book, The Evolutionary Empath, hits shelves in just a few short weeks (at the time of this writing) and my dreams are rapidly becoming reality. As I’ve engaged intensely in my marketing and promotion activities, I’ve had to face multiple demons around being seen, deservedness, and losing myself in the overwhelm. Oh, let me just say it a little more bluntly…shit is getting real, really fast!

For anyone who has been on the precipice of fame, asked to fill big shoes, or called forward by their soul in a major way, you know what I’m talking about.

It creates a period of intense accelerated growth. Simultaneously you are swirling in exhilaration and terror, vacillating between high-inducing confidence and heart-crippling doubt. I’ve described it as Spirit giving me a crash course in holding a bigger container for myself. As a result, I’ve had to increase my energy clearing and grounding practices, be militant with my self-care, and I’ve done so much deep breathing you’d think I was in labor. Well, in a way, I have been ?.

But recently, something triggered me that I could not work through. In retrospect, I can see how it was building. In addition to the marketing efforts of my publisher, I also hired a conscious marketing company to help me knock this book launch out of the park. My coach encouraged me to do things like increase my social media presence, create a weekly blog, and build a 12-episode podcast. Though nervous, I was happy to do them all.

First, when I built my Facebook business page and increased my social media presence, I felt a hitch in my chest. A bit of apprehension. But I applied my healing practices, worked through it and was able to move on.

Then, when I started scripting and recording my podcasts (they are created in advance), that hitch in my chest grew more prominent. Apprehension became resistance and fear. But again, I worked my tools, talked to the scared parts, and was able to move past it.

Then, my podcast launched. And I was launched, too…into absolute panic. Forget apprehension or resistance. I was in terror. It was all I could do to be even remotely functional or productive. The first episode launched on a Monday and all week I could hardly catch my breath. I came up against something that many of us healers and coaches eventually face: you can only facilitate yourself through so much.

By Thursday, I was locked down. My throat and chest felt like Godzilla’s hand had reached in, clutched my windpipe, and welded itself permanently in place. My extensive toolbox seemed profoundly deficient. When I get this way, I know I have to reach out to a colleague to facilitate me. My spirit guides showed me what technique and who, so I contacted my friend for an emergency session that afternoon.

I had been choking back tears and bedlam all week. As soon as he established the container of our session and I knew I didn’t have to facilitate myself, my emotions could no longer be contained. He asked me where in my body I was feeling the sensation and I pointed to my chest and throat as suddenly, I could no longer speak. He encouraged me to fully feel the energies. That was all it took.

The floodgates broke and I immediately went into an altered state, traveling back to a past lifetime where I was drowned for speaking out. As my body viscerally recalled that former death, I physically began sputtering, gasping, screaming, crying and choking. I was reliving the drowning in every way. Yet at the same time, I knew this enactment was clearing the cellular memory from my body and the karmic pattern from my soul. This went on for several minutes until I heard a faint voice calling me back.

My colleague had a challenging time getting me to return to present consciousness. I still couldn’t speak. He walked me through reconnecting my chakras to the earth plane and grounding my energy. At some point, I became aware of the fact that I was death-gripping my desk (we were on Zoom) as though if I let go of the desk, my spirit would float away for good. It took a long time to release my hold.

When I was finally capable, our next step was to “dial-up” my past life self and have a conversation with her. She came online instantly, and I immediately knew why my spirit guides led me to this colleague. He looked like one of the men who drowned me. As soon as I felt her inhabit my body, she had a harsh response to his countenance. Gratefully, she was still willing to be interviewed.

It was the late 1700’s in Massachusetts, and she lived in a colony descended from the Puritans. Her name was Rebekah. From a young age, she never understood the strict rules placed on men and women and their roles. She wanted to express herself. She was opinionated and curious. She didn’t want to do just “girl things.” She wanted to listen to the men talk, to participate in debate, to ask questions, to have the freedom they seemed to have. Despite her parents’ rigorous efforts, they could not mold her into a proper young lady.

As she aged, she began to feel the scorn of everyone around her more acutely. Not only were her parents embarrassed by her, but she was also blasted with contempt, judgment and utter disdain by her community and church. Which in turn put more pressure on her parents, which cascaded down to her.

Yet, in secluded alleys, dark corners and backwoods, many men in the community pursued her. She was wild and untamed, passionate and attractive. Secretly men coveted her, but in the light of day, they were stiff, principled, married men and churchgoers. She always fought them off.

One night she found herself being hounded by about a half dozen men. Drunk, sexually frustrated, and angry at her many previous rebuttals, they decided it was time for her to give what was rightfully theirs to take. She fought them valiantly, not letting a single man penetrate her. But their fervor changed and twisted into a group mind. No longer were they interested in raping her. They were so enraged at her defiance that it simply became about ending her. They drowned her in a cold pond. It was November. She was 22.

As all of this information came through, the reason for my anxiety and panic, the inability to catch my breath, the tightness in my throat and chest, all became crystal clear. My spirit guides gave me a mental diagram that explained the phenomenon I had been experiencing in my business. As long as I stayed below a certain bar – only so many students in a workshop, only so many subscribers to my newsletter, etc. – then I stayed under the radar. Social media wandered dangerously close to this upper limit. The podcast went screaming past it. The cellular memory of this past life was triggered, came violently online, and threatened to drown me all over again.

This story has many morals: Not all fear is in your head; ask for help; the body stores physical memories from other lifetimes; don’t be afraid to face your demons. But my purpose in sharing this very personal journey is to let other people know: you’re not alone.

Stepping out onto a bigger stage really does call any fear of being seen or heard out onto the carpet…and how.

Facing your demons and going to that scary place really does help you heal and transform.

And no matter how talented, experienced, scrappy or famous you are, the next octave will always cause you to doubt yourself and make your intestines liquefy.

Living life as a conscious human, heeding the call of your soul, and trusting the wisdom of the Universe is not for the faint of heart. If you hear your soul beckoning you forward, but something is holding you back, don’t turn and run. Whatever your Godzilla’s hand is, lean into it. Yes, really. Call on your support system and go there.

The only way through is through.

And what awaits on the other side is a level of confidence, clarity, surety, joy, and groundedness you could never predict. 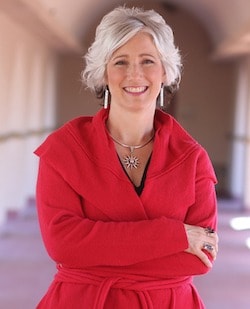