My previous post below generated super discussions that triggered me to write this post. In the post, I showed how simple ideas might lead to many more ideas by allowing them to “react” with each other as if ideas were chemicals.

Creativity Is Whipping Ideas and Resources

The concept of three such as three simple rules interacting with each other has many applications in natural life and in business. I surveyed a few of them in my presentation “The Three Simple Rules Everywhere”. I include one slide that shows few areas of where three simple rules apply. 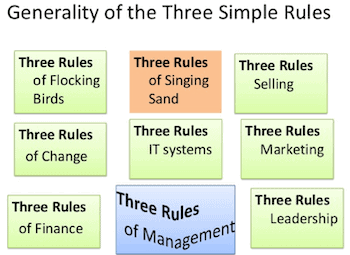 Image from the authors’ presentation on three simple rules

A chemical Metaphor for the three simple rules

I mentioned that ideas are chemicals and prone to react with other “chemical ideas”.

It is interesting that this idea has support from nature. Look for sugars whether they are single, dimers or polysaccharides all consist of three elements, which are carbon, hydrogen, and oxygen.

Three elements interact to create huge possibilities. Three simple sugars resulting from the bonding of three elements may then react and produce different carbohydrates. Allow for the reaction to proceed generates polysaccharides with different structures and arrangement ranging from linear to fibrous and globules formations

Starch, glycogen, cellulose, and chitin are primary examples of polysaccharides. These molecules are complex and vary considerably in their structures and uses.

If we add a new atom to the initial three atoms in simple sugars such as nitrogen, we end up with completely different reaction products. We now produce amino acids that lead to the formation of the complex proteins. A small change in structure by adding a new element changes the trajectories to completely new domains.

Complex Ideas from Simple Ones

Consider ideas as if they are active elements. Like the three elements that react to produce millions of different sugar-derived products with varying complexity, so are ideas.

You may produce a great number of ideas but only focus on three to four of them at a time. Their interactions shall result in a huge number of ideas this sure way. Working on many ideas simultaneously will only scatter the efforts and lead to huge complexities that we are unable to manage.

From these simple sugary ideas, you produce the first disaccharides of ideas

From these nine ideas, you may produce many more ideas and complexity initiates.

It is this way that we may produce ideas fractals with unlimited potential and completely surprising properties.

From the small number of ideas, we may generate much more than starting with many ideas that do not feed to each other.

Creativity is to start with few seed ideas then applying fractal efforts to make them generate new possibilities and novel products.

With fractal efforts of ideas, we make more of the less. The rules of three applies to ideas.