Author’s note. This article is dedicated to my dear mother and long-time editor. She always had so much hope, belief, and love for me. I will keep her memory alive through my writing.

Never would I have guessed that this would be the final picture that my siblings and I would take with our mother. Four years ago, we gathered for a post-Thanksgiving gathering with her. We all had so much to be thankful for. 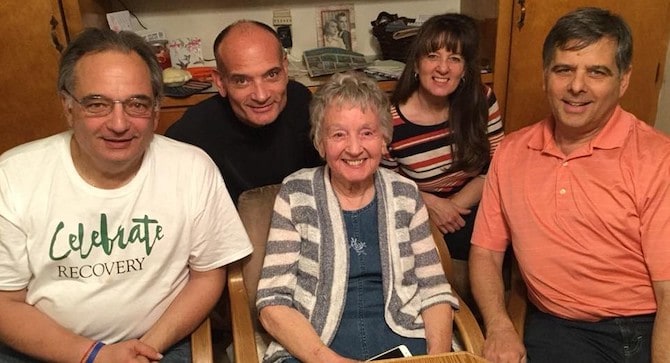 Putting those thoughts on paper in a manner fit and deserving for her is no minor feat. My hope is that when you have finished this article, you’ll have a glimpse of the impact and inspiration she was to me.

Mabel Marguerite Schriefer was born in Munsie, Indiana in 1932. After she completed eighth grade, her father moved the family to Southern California. Her only regret was not telling her childhood crush how she really felt about him. High school was not easy for this Midwestern girl but she managed. After graduation, she took a job at the local telephone company and not long after, met a customer named Richard, who ultimately would become her husband and father of her four children.

In September of 1958, two months before my birth, they moved into a brand-new house. This would be the place she would call home until her days on this planet were completed. As a young mother raising 3 boys and a girl, there wasn’t much time left for her. Most of her joy came from seeing her children’s highlights and successes, and she also was there to comfort them in their time of disappointments and frustrations.

She often minimized her talents and shied away from praise. Center stage was rarely her place; she would always prefer it be for her children. She did, however, have a beautiful voice. I’ll never forget when she used to cook our meals and the AM radio over the stove would play Country music. She sang along, always in harmony and always in tune.

My interest in words and love of writing is a direct connection with her.

The earliest story with any connection to words happened when I was 8 years old. My oldest brother, Riduan, was working on his grammar homework and Mom was sitting at the kitchen table helping him. The door to the kitchen was closed and I was on the other side lying down and watching television. My attention soon focused on my mother when she said aloud, “No, it’s a preposition!” A few moments later, she repeated the same phrase with a bit more volume. The third time was louder. I was a bit perplexed because she rarely raised her voice that loud, but I certainly remember being frightened and thinking, “I’m going to remember what a preposition is.” To be fair, my brother eventually understood what a preposition was, and went on to earn a master’s degree in the Classics: Latin, Greek, and Sanskrit. Nonetheless, my mother and I frequently laughed about this story. One of those times was less than a month ago.

The words to describe my mother’s character would include giving, caring, loving, even though sometimes it was to her disadvantage or detriment. But that was precisely who she was.

After raising her children, she took care of our ailing father. When he passed, her own mother became ill and she saw to her needs. Then, a family friend, and lastly, her sister. All this while being a full-time grandmother and volunteering at a local hospital.

Baking was something she truly enjoyed in the latter part of her life. Her mini pumpkin bread loaves were adored by anyone privileged to eat one. She told me once that baking those treats brought her great joy as well as a purpose.

During her eighties, she finally began to acknowledge her capabilities, embrace her self-worth, and accept the positive praise she’d been receiving in prior decades. She even mustered the courage to reach out to her old childhood crush and reconnected with him through social media. The biggest surprise was when he admitted to her that back then, he had the same feelings toward her. It never became anything more than a friendship, but whether it was talking with or receiving an email from Marvin, it always brightened her day. This past summer, he unexpectedly passed away which caused her far more grief and pain than she had anticipated.

In October, I had written an article about grief, and while reading my article out loud, she suddenly stopped. I could sense she was crying and soon she broke the silence confessing how troubling and perplexing it was to get over Marvin’s death. I reminded her that her grief was a measure of the depth of her love and the greater the pain, the more it signified that she loved him. When we finished our phone call 45 minutes later, she thanked me for reminding her how great her love was for her friend.

Now, Mom, it’s our turn to bear the pain and cry the tears. It is we who have now become aware of how much we loved, and still love you.

Many writers were influenced by their mothers. But how many of those were fortunate to also have them as their editor in chief? How many had the privilege of a weekly appointment every Saturday over 250 times for a one-hour-plus phone call? Now, I must face this task without her being there to support and polish my words. To never be able to reach out on a Saturday and hear her voice read my article and then chat about everything.

There is an emptiness in my soul left by her departure. I will always have those treasured memories. Her inspiration will keep my passion for writing alive. Her footprints will be there to guide and navigate me so that I may have the opportunity to touch lives in the same way as she.

John Duniahttp://shamedoctor.com/
John has a passion; and that is helping others heal from past difficulties and abuses. Healing became important when he realized how much it freed him from his own past and now works to help others experience that liberation. The key to his success was discovering that the most debilitating damage was his own shame and the destructive things he believed about who he was. Throughout his own healing journey, he became hyper-aware of how shame was affecting him while having little clue of its presence. Others noticed these changes and reached out to him for help. His methods were so effective that he made it a mission to shift his career into helping others. Adopting the term “ShameDoctor”, he continues to teach others to empower themselves through his remarkably effective techniques. “Shame is one of the biggest yet least talked about issues we face as individuals and society yet so very little is mentioned about it.” It is his purpose to change the way the world perceives shame and promote helpful and viable techniques to heal and overcome those past struggles. John’s book, “Shame On Me – Healing a Life of Shame-Based thinking” was self-published in 2016. In addition to working with clients, John also writes healing and insightful articles each week. He is also looking forward to speaking on the topics of shame and healing throughout the globe.