Fly Me to the Moon

Join me on a journey to the moon

A beautiful image. The moon, lighting the surrounding sky, borders on the surreal. Moonlight playing with clouds, glistening and feathery as if imagination and fantasy joined in harmony.

Childhood memories of the moon. A similar effect as if lying on grass being drawn upwards into fluffy clouds.

A full moon, its face distinct as if smiling upon the beauty of our planet.

It is supposed to be bad luck to look at a full moon at the end of its four-week journey around Earth. So large it looks as though you could raise a hand and touch its surface.

As for ‘bad luck’ during the full moon, it has quite a strong influence on humans as well as the oceans.  Consider a powerful magnet passing over.

A phrase, ‘Over the moon’ conveys ecstasy as if a luna gift;
not in a spacecraft.

Perhaps with a swan; but that is another tale!

Fly me to the moon 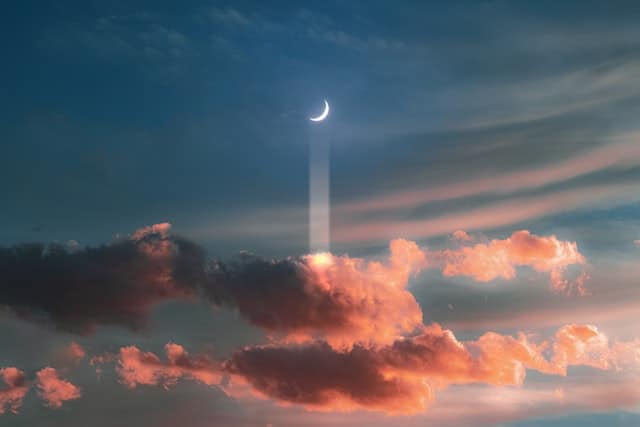 A flying dream to the moon, around  250,000 miles away. Gently floating,  ascending, covering space and time in milliseconds. In fact no time element, instant; no feeling of speed, velocity, or momentum. As if the journey were instant. And it was.

The moon’s surface below, the happy smiling luna face. Seemingly looking up at a free-floating human who is mesmerized by the moonscape. And then seeing footprints on the ground. A small step…..

Was it a dream? Did I really see footprints in on the ground?

Floating above the moon was real, but the journey was instant. Not even a blink of an eye. From reality to fantasy and beyond.

A flying dream; a reality when flying. A fantasy on returning to reality…