I have no memory of it of course but I was born in Storer’s Nursing Home in Carpenter’s Road, Edgbaston, Birmingham UK.‎ Apparently I arrived at 4 am in the morning. A little early for breakfast; but the following years to the present I am essentially a ‘morning person’; but not that early.

Later I do recall having my tonsils and adenoids removed following a bout of almost choking and having serious difficulty breathing. Even a traditional ‘cure’ of hot milk, toast, and butter…….and a scotch whiskey……. did not solve the problem.‎ Not even  Scotch whiskey! Perhaps a Jack Daniels would have worked…..on ice. I recall moments prior to the general anaesthetic;  remembering sitting up in bed glancing through windows offering a view of green English gardens of the iconic, exceedingly old Calthorpe Estate, of stately origin. Following a period of unconsciousness; a timeless vacuum and awakening after the operation, much to my surprise I was presented with delicious minced chicken and afterwards, jelly!! Nice nursing home/hospital.‎ Even to this day the sight and taste of those dishes live on in my mind.

The earliest memory of childhood is when living in my parents’ house, which at the time was next to an old former farmhouse with grass meadows.‎ Hard to imagine that this was within reasonable walking distance from the city centre. The farm, long since gone and replaced by a school. I still possess the visual reality of a run down thatched farmhouse surrounded by overgrown grass and straw.  Rather sad, gone fauna so green, gone the long grass taken over by a modern soulless structure.

Prior to this house, we lived on the same road, in a rather large Victorian residence. My Dad liked it but Mom did not, so he was persuaded to buy the other house I remember so fondly. I recall being pushed in a child’s pushchair and enjoying gentle slopes of house driveways along the road. Smooth tarmac and most enjoyable; almost like flying. That memory visits me often.

Flowing next to the former farmhouse and fields, a little stream ran nearby and apparently under the house itself; rather deep down.  It was a time of excitement when a walk was planned. The manager of a traditional English pub just across the road and a friend of the family was the guide.

Walking literally along the stream, Wellington boots keeping feet dry, branches of trees hovering overhead, the sound of water gently rippling over glistening stones. A child’s magical delight. ‎A calming sound as though leading to a Universe far beyond a child’s imagination. Where sun blessed the stream, the water sparkled as if there were diamonds glistening on the surface; flowing,  seemingly never-ending, disappearing into a faraway distance, tempting further exploration but potentially unknown elements prompting caution.

One memorable sight was that of a kingfisher (beautiful colours), not only observing but supervising human invaders trespassing upon its territory.

We walked a long way and ultimately the river banks were becoming higher and higher and tree branches lower and lower; time to turn around for home and enjoy some cake and hot chocolate.  ‎Not until many years later was it revealed that the stream meandered for miles and miles.

I must have been around five years old and can look back and remember those first years with a degree of glee and awe. Around a year later, I do remember being given a pedal car; a metal one, which looked like an old racing car with real blow-up tyres (the car’s ‘racing number was on the side ‘1’). A hand-down from a family member. 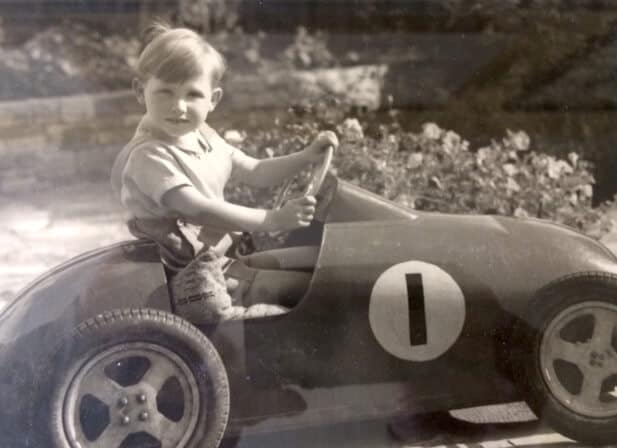 One day on finding a tyre had gone flat I literally pedaled it across the main road to a garage my Dad used and requested that the puncture be repaired! Whether I had waived at vehicles so they stopped, allowing this imperious (though exceedingly polite) five year old to ‘drive’ across a busy main road, is beyond recollection.

Describing it now (and the memory is as vivid as if it had occurred yesterday), I may have been given the impression to the garage mechanics of being an overly self-assured, bordering on pompous, but certainly not impolite; politeness and good manners had been part of my upbringing from ‘day one’. Including when to recognize when someone is going to shake your hand. One keeps one’s arm straight until there is the slightest signal; body language than the individual is going to and wishes to shake hands!

I was indeed reprimanded by my parents for being foolhardy, but I seem to have a vague memory of amusement on their faces.

Mom and Dad loved gardens and the front driveway was transformed where an ‘island’ was created in the centre with a tall lamp to light up the area. I can still visualise; smell the almost hypnotic scent of mutli-coloured wallflowers. Almost the equivalent of English bluebells blessing the woodland just before leaves reveal themselves reducing sunlight. Spring enlivens an awaiting landscape.

At one time Dad drove an Armstrong Siddeley which was parked outside the garage doors. Later he had a Humber Super Snipe. Perhaps being a petrol head could be a genetic phenomenon; my son most certainly inherited the same, or even more dedicated and enthusiastic love of autos; American autos!

In those very early days, I had of course no idea of religion. As I later found out, Mom was a devout Christian; Church of England. I later recalled my Uncle Charles, on my Mom’s side being an integral part of the Church and famous for playing the piano in church. My experiencing two religions ultimately provided open-mindedness‎ and indeed curiosity towards other cultures. Indeed I am exceedingly happy engaging with people the world over.

CHURCH OF ENGLAND SCHOOLS
My Church of England schooling ultimately generated an attitude and feeling of comfort when visiting a church. Sometimes ancient Saxon or Norman. Saxon being the originator of Anglo-Saxon culture and language (Germanic, but also a good degree of Latin and a touch of Danish!). Norman being from the Norman conquest in 1066 by William the Conqueror of Normandy.

I am proud and honored to have been asked to become a volunteer welcoming steward, greeting visitors from the world over, different nationalities, and religions.

Winchester Cathedral, however majestic this 1000-year-old icon, commissioned by William the Conqueror, is peaceful when full of people or almost empty.  Unusually it has a stained glass window with an inscription in Hebrew, with the Star of David as a backdrop. I am proud and honored to have been asked to become a volunteer welcoming steward, greeting visitors from the world over, different nationalities, and religions. It is the history that really gains much interest from visitors. Also, I am a voluntary steward at the award-winning Kings and Scribes Exhibition; also at the cathedral.