Exodus 2: Spain to Portugal to Ceuta to Morocco to Rock of Gibraltar

The War of the Spanish Succession (1701-1714) wages on. In my mind’s eye I could clearly see an ancestor of mine, a young Sephardi Jew, walking the winding dusty roads of Tetouan in Morocco in North Africa on his way to study at  a  local Yeshiva – his place of learning. The peace treaty that would end the hostilities and have a profound effect on his family’s future. 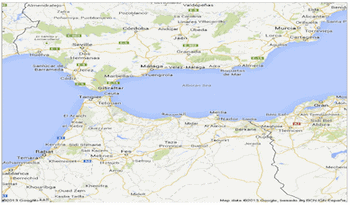 By word of mouth, the family lore had been passed down to me by my father’s sister Bessy, born in Brazil, was that before settling in Gibraltar, our Israel line of ancestors exiled from Spain in 1492 had lived in Tetouan in Morocco and before that in Ceuta, a Spanish, previously Portuguese, enclave in North Africa. I never thought I would ever be able to put a name to that ancestor of mine or have any demonstrable proof of the family lore prior to Gibraltar.

NOTE: VISIT MY PUBLISHED ARCHIVES FOR ALL EARLIER PARTS OF THIS STORY

Aunt Bessy spent her entire life in a wheelchair – a proud Spanish and Portuguese Jew – treating all our family’s homelands  over the last half millennium as if they were places in which she herself had lived. After much research I can now regard those ancestral homelands in a similar way.

Whilst watching the 1950 Soccer World Cup on her TV set Bessy was self evidently an avid supporter of Brazil – her place of birth. Sixty eight years later, I was lucky enough to attend the Soccer World Cup in Russia, the birthplace of my maternal grandmother, accompanied by my grandson, Jake, to support the team from England – my place of birth. Below you see us slightly celebrating an English goal. 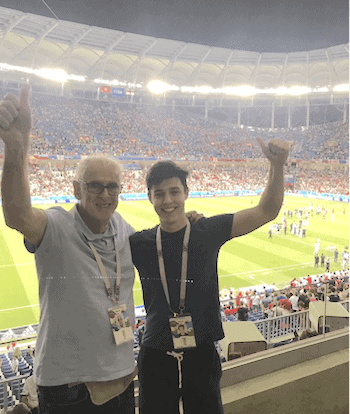 Jake and I also enjoyed the Portugal v Morocco match during which – as the pictures below show – I  empathize with some of the fans of both teams and let each know their team  is from an ancestral homeland of mine.

Finally there is a picture of me – this time empathizing with a Brazilian fan from my father’s place of birth. The Corona virus crisis has made me realize that in one way or another how interconnected we are – inhabiting  one world. 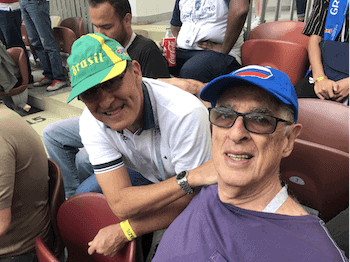 Sight of my great grandfather Judah’s last will and testament was courtesy of my recently discovered Brazilian cousins. On my attempt  to translate it into English using an internet based translation system I experienced great difficulty. It was written neither in  ”pure” Spanish nor “pure’ Portuguese.  My initial reaction was that perhaps the language used was Ladino – medieval Spanish continued to be used by Jews  forced out from Spain because of the Inquisition and by their descendents for centuries after the expulsion.

My Brazilian cousins quickly corrected my mistake. The document is in fact written in the little known and almost extinct language of Hakitia (also spelt Haketia, Haquitia and Jaquetia}  and sometimes referred to as Western Ladino. It is a mixture of 15th century Castilian (42%) Arabic (38%) and Hebrew (20%%). It was the spoken language of Jews expelled from Spain in 1492 settling in Morocco and subsequently taken by future generations to Brazil, Canada and Venezuela. Although a person speaking Hakitia would understand Ladino the reverse was not true. The  period in which Old Castillian itself was a living language lasted from the 10th until the 15th century.  Believe it or not some Jewish teenagers in Madrid are now using some Hakitia words and phrases in order to show how “cool” they are.

My great grandfather Judah was in no way “cool”. He learnt Hakitia from his parents, proving  beyond doubt that he was descended from the Jews of Morocco who had been expelled from Spain in 1492. Although many of those Jews had moved directly to Morocco some had moved first to Portugal. My Brazilian cousins tell me that the Israel family were amongst those 20,000 or more Jews who, in 1492, chose to move from Spain to Portugal rather than to remain in Spain where they would be forced to convert to Catholicism. They say they know of the initial move to Portugal for certain because  the family stay there was in records the Brazilian family had donated to an Israeli museum. With the evidence of  Hakitia as the language of the family line I expected that the years of sojourn in Portugal  before they decided to  move on to Morocco were only a few.

YOU ARE INVITED TO JOIN MY FAMILY IN 1492 SPAIN

Statues of famous people of the past are being destroyed all over the world because judged by the mores of the 21st century those being honored then were so  evil that the sight today of their image should be offensive to all right minded people. Does it matter that actions  judged now to be evil, back then  in the eyes of their peers were considered righteous with their performer considered  in no way to be evil? Is it possible for us as 21st century people to agree that although that a particular act of theirs was undoubtedly evil  the performer of that act centuries ago should not automatically be considered evil? Should we not rather seek to understand why  it did not occur to them that what they were doing was evil and  how peoples’ views of  those actions has changed over the subsequent centuries?

I have to wonder what innocent views  and actions of ours will be considered evil by future generations. After all most people lead their lives in accordance with the crowd view of what is right and what is wrong. If that crowd view changes at some time in the future does that automatically make all today’s followers of the crowd evil?