Every Day is a Good Day – Some Days are Just Better

There are many things in life in which I sit back, take a deep breath, and as I exhale, I ponder… How could I be so lucky? And in the next breath, I know the answer. It ain’t luck, I am blessed. Take a look at the picture below. 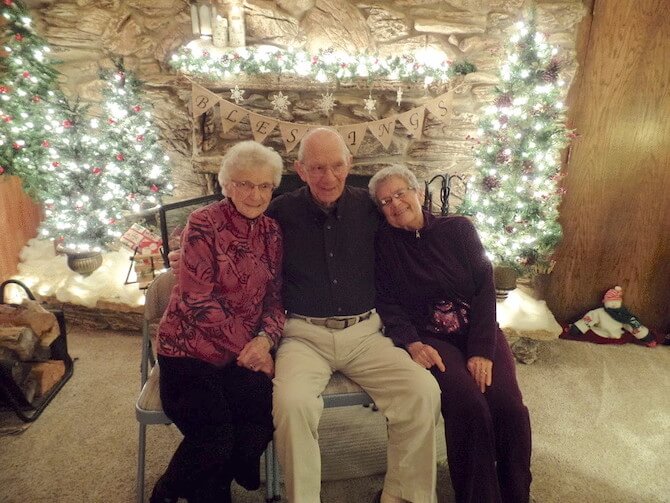 The man in the middle and the woman to the right, are my parents. “Lord willin’ and the creek don’t rise,” they will be married 70 years this August. (The third person, to the left, is my mother-in-law, Marj, age 93 – another source of inspiration and several stories…)

How many people can say that their parents were prom king and queen in high school? How many can say that the prom king and queen in question reigned in 1945? How many would believe that the Kimberly, WI royalty from 1945 still reign? There they are, in all their regal glory. Neither of their parents owned a car, so their date consisted of walking for most of their big date night. To think about all that their lives have entailed, the winding, careening, bumpy journey that it has been, and they laugh about all that they have faced. Ask my Dad how it feels to be married for 69 years and he will not hesitate “The first 68 are the hardest.” In the next breath he will quickly add “she’s my best friend and my nurse.”

Lots of people quote Abe Lincoln, Mark Twain, George Carlin, Stephen Covey, or Jesus. I have used some of them. More often than not, I will quote my Dad. He is one of my favorite people to quote. The last two words of the previous sentence weren’t necessary.

My parents grew up in the same small town that I claim as my hometown, Kimberly, WI, located about 30 miles south of Green Bay, nestled on the Fox River. The Fox River’s claim to fame – one of the few rivers in the world to flow north. My mom lost her dad in November 1929, the beginning of the Great Depression. He was killed in a car accident at the age of 22. My mom was 8 months old.

My Dad’s family was similar but still unique. His dad, a kind of “ne’er do well” as they were referred to in those days, tried farming, didn’t like it, went from one job to another. He was about to lose his job at the paper mill in town when cancer claimed him in 1943. My dad was 14. My Grandma Dietzler went from bar to bar to grocery store to liquor store paying his debts with the little that she had gotten from her late husband’s life insurance.

When asked how they got through the Depression, they look at each other and shrug. “We didn’t know it could be any different.” Now he admits that life has its ups and downs, seasons, peaks and valleys. He admits that maybe they didn’t fully appreciate all the good times while they lasted. “You know that you’re getting old when it’s not the years going by so fast, but the decades,” he says as he laughs, and looks down.

Bad jobs or good jobs, good bosses, great bosses, not so great bosses, health or health challenges, “If I get out of bed and my feet find the floor, I’m thankful for another day.” One of his favorite bromides: “Everything is temporary, take each day as it comes, be grateful for the good, and know that tomorrow is another day.”

“Don’t believe everything that you think…”

Healthy self-talk is good. We need to monitor that inner voice. The advice to not believe every thought that dashed through my head was vital to coming back from my own struggle with depression. Dad never said it in so many words, but I think that he fought those demons as well. He knows how the mind is one of our greatest gifts. He also knows that if we don’t regulate how we think, we can starve ourselves on a diet of negative internal dialogue.

It was not a glamorous life. He provided a comfortable home and a decent standard of living for my three brothers, my sister and I.

He only went to college for one semester, found out that engineering was too much math and came back to Kimberly in January 1947, at the ripe old age of 18. He worked at the paper mill in town for 44 years. He served his church and was on the board of directors for the local credit union for more than 35 years. For years he read Newsweek and US News and World Report but then turned to books. He keeps a journal for all the trips that they have been on, and all the books that he has read. It was not a glamorous life. He provided a comfortable home and a decent standard of living for my three brothers, my sister and I. Did he always love what he did? Was he always gloriously happy and upbeat? Were there times that it would have been easy to brood and wallow and mope? That’s when he modeled that great work ethic: he put one foot in front of the other, did his job, served his family and community and lived his life with the tools that he was blessed with and made the best of what was available.

Jobs at the mill changed, ownership changed, he kept his equilibrium, positive attitude and did whatever was asked from him. They added to his responsibilities one job that no matter what department he was in, or what job he was doing, it always came back to him. In the days before direct deposit, he was given the task of handing out the paychecks; he could do it quickly without people having to say their names when they got up to the window – he knew everyone and had their checks ready.

Take one way there, and a different way back

Life isn’t summed up with cute little sayings. But sometimes, simple truths are shared simply. I love that my parents succeeded at something that isn’t easy to succeed at. What is their magic elixir for being each other’s one and only, and staying that way for almost 70 years? Persistence. They just gave each other second and third and fourth chances, and never found themselves on that last chance.

Here’s another of Dad’s beautiful sayings, simple, yet so full of his optimism and his realism. When I had a crappy job, or a crappy outlook or a crappy class he’d look at me after I had once again said “I’m never gonna get this. I’m always so dumb about this stuff…” His response was ⤵︎

Never say never. Never say always. Nothing is impossible, and nothing is forever. At least if you keep trying, you know that you can keep after something, and if you always give up, you’re always going to be a quitter.

“Every day is a good day, some days are just better.” – Alan Dietzler’s response if you ask him how he is…

And I have been blessed to have this shining example as my Dad for all of my nearly 60 years. My son was born the year after Dad retired, so at the age of almost 26, his only knowledge of grandpa is of grandpa retired. Dad taught Zack the finer things of the game of golf. He instilled such a love for the game in him that Zack took the game up for his life’s work, and is now an assistant pro at a golf course.

Life is not a problem to be solved, but a mystery to be lived…

With passing years, there have been sacrifices. Don’t talk to my parents about them. Friends have passed. Co-workers, siblings, acquaintances… they don’t make the trip down to Florida every winter any more, they don’t drive much anymore. Mom and Dad love to play golf yet, but only 9 holes, 18 is too much. “I’m just happy to be playing on this side of the grass…”

And when the day comes and they leave this life, I’ll be sad, and I’ll mourn, and I know that life will never be the same. But I’ll never be empty.

That Pesky Amendment… No, The First One

On Fires, History, and Just Listening …