Dreams, Consciousness, And Life with Bernie

Dr. Bernie Siegel is my guest author today in our series of shared articles. He has graciously written the FOREWORD and the Children’s Chapter to the book Dr. Larry Burk (Radiologist at Duke University Medical) and I (three time breast cancer survivor whose dreams diagnosed what the medical community and the tests on which they relied missed all three times- breast cancer,) have written about dreams that come true and save lives. The book is based on Dr. Larry Burk’s research on Dreams that Diagnosed Breast Cancer in 18 women. The book is scheduled for publication by Findhorn Press in Spring 2018.

Have you met your spirit-guides or had a near death experience? In this blog Bernie shares some amazing stories of both….

In 1978, nearly a decade before retirement, Bernie launched ECaP—Exceptional Cancer Patients, in which he and his wife and co-worker, Bobbie, remain active today. ECaP is a therapeutic approach Bernie calls “Carefrontation” that helps patients interpret their drawings, dreams, and images to express their feelings about the healing process. The physical, spiritual, and psychological benefits that emerge strengthen the immune system, a direct response to the power of the Mind-Body Connection about which Bernie has written and spoken extensively. He is currently working on other books with the goal of empowering patients and teaching survival behavior to enhance immune system competency.

Bernie believes that in the next decade, the roles of consciousness, spirituality, non-local healing, body memory, and heart energy will all be explored more intensively as scientific subjects.

Enjoy these incredible Bernie stories of NDE (Near Death Experience), the VERY interesting and hilarious name of his guardian angel and thoughts on health, healing, and consciousness that also reflections your life, because we are all connected by Universal Oneness.

When I was four years old I was home in bed with one of my frequent ear infections. I took a toy telephone I was playing with and unscrewed the dial and put all the pieces in my mouth as I had seen carpenters do with nails which they then pulled out to use. The problem was that I aspirated the pieces and went into laryngospasm. I can still feel my intercostal muscles and diaphragm contracting forcefully, trying to get some air into my lungs, but nothing worked and I was unable to make any sounds to attract help. I had no sense of the time but suddenly realized I was not struggling anymore.

I was now at the head of the bed watching myself dying.

I found it fascinating to be free of my body and a blessing. I never stopped to think about how I could still see while out of my body. I was feeling sorry my mother, who was in the kitchen, would find me dead but I thought it over and found my new state preferable and intellectually chose death over life.

Then for no apparent reason, the boy on the bed vomited and all the pieces came flying out.

He began to breathe again and I was very angry as I returned to my body against my will. I can still remember yelling, “Who did that?” My thought as a four-year-old was that there was a God who had a schedule and I wasn’t supposed to die now. So an angel apparently did a Heimlich maneuver on me is the way I would explain it today. I really do believe there is a schedule we create unconsciously because of later life experiences.

Twice I have had my car totaled by people driving through red lights and once I fell off our roof when the top rung on my wooden ladder snapped off. In none of these incidents did any significant injury occur to my body. Someone told me it was because I had an angel and he knew his name. I asked what it was and he asked, “What did you say when the ladder broke?” “I said, Oh Shit!” He said, “That’s his name.” I will add he always shows up when I call him in an impassioned way.

My next experience was with the healer Olga Worrall. I had injured my leg training for a marathon. It was very painful and not responding to rest or therapy. At an American Holistic Medical Association conference, Olga was a guest speaker. My wife told me to ask her to heal me.

I was embarrassed to ask and very frankly a non-believer.

Never the less my wife pushed me forward and Olga sat me down in a chair and placed her two hands on my leg. The heat from her hands was incredible. I remember putting my hands on the opposite leg to compare the heat sensation. There was no sense of warmth from my hands coming through the dungarees. When Olga was done I stood up and was completely healed. The pain was gone and I could walk normally. Another time Olga and I spoke at the funeral of a mutual friend. After the ceremony, we were standing in a deserted hallway when she asked, “Are you Jewish?”

“Why are you asking?”

“Because there are two rabbis standing next to you.” She went on to tell me their names and describe their garments, which included their prayer shawls and caps. Her description of them was exactly what I saw in my meditation and imagery sessions when I had met these figures while walking on my path.

Another evening after I gave a lecture, which felt like someone else was giving it and I was simply verbalizing it for them, a woman came up to me and said, “Standing in front of you for the entire lecture was a man and I drew his picture for you.”

Again, exactly the face and features of my inner guide.

I still have the picture hanging in our home. My next experience came when I was telling a friend about how busy I was and she said, “Why are you living this life?” Her intention was to get me to slow down and travel less but her question sent me into a trance and I immediately saw myself with a sword in my hand killing people. My first thought was that I had become a surgeon in this life to use a knife to heal and not kill. I spontaneously went into a trance again a few days later and saw myself living the life of a knight who killed because he feared his lord and what he would do to him if he didn’t carry out his commands.

I killed my wife, in this life, and her dog and was devastated by the experience.

But at the same time, it revealed to me why my wife’s face has always had a hypnotic effect upon me and why I am so involved in rescuing animals. Ultimately it taught me about having faith in the true Lord and like Abraham, Jesus, Moses, Noah, and others to understand that what our Lord asks of us is for the greater good and that if I had said yes I would not have been asked to kill anyone.

Most recently one of our cats disappeared when a door was left open.

After several weeks with no sign of her, I was sure she was killed by a predator. A friend I had made, Amelia Kinkade, is an animal intuitive who lives in Los Angeles. We live in Connecticut and Amelia has never been to our home or near it. I pestered her to tell me where the cat was and one day I received an email, without even sending Amelia a picture of the cat, and it detailed the house, yard, other animals and people who were involved in the cat’s life.

The next day I went out and found the cat exactly where Amelia said it was hiding. She told me in the email, “The cat is alive because I can see through its eyes.” If that doesn’t make me a believer nothing will. I totally believe that consciousness is non-local and not limited to the body. I also have experienced this through the drawings and dreams of patients I have cared for which allows them to know their diagnosis and what the future holds for them.

As Jung said, “The future is unconsciously prepared long in advance and therefore can be guessed by clairvoyants.”

I believe it is this unconscious awareness which we each bring with us when we are born. So I do not believe we literally live many lives but that we bring with us the experience of previous lives.

Thus, the wiser we get the better the future will be for those who follow us.

I wish to thank Bernie for sharing his amazing true-life miracles with BC360° readers. It just proves that we are all born with Spirit-Guides/Guardian Angels, we are their job and they take that job seriously. Do you know the name of your guardian angel? Might it possibly the same interesting name as Dr. Bernie’s?

Meet your guides in your dreams.

Meet your guides in your dream-world and bring their guidance into your waking world.  It may be helpful in building trust on the process of life so you may live it fearlessly. 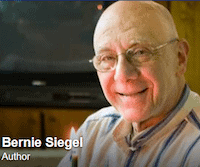 Dr. Bernie Siegel (Bernie, as he prefers to be called), was born in Brooklyn, NY, attended Colgate University and Cornell University Medical College. He graduated with honors and holds membership in two scholastic honor societies, Phi Beta Kappa and Alpha Omega Alpha. He trained to become a surgeon at Yale New Haven Hospital, West Haven Veteran’s Hospital and the Children’s Hospital of Pittsburgh. In 1989, Bernie retired from Yale as an Assistant Clinical Professor of General and Pediatric Surgery to speak to patients, their families and caregivers.[/message]